Beijing has launched a defence of its vaccination program, accusing western media of attempting to trash China's reputation as it ramps up the inoculation of millions across the developing world.

The push follows Chinese state media urging Australia to pause its rollout of the Pfizer-BioNTech vaccine after 33 elderly and ill people in Norway died following immunisation. The Norwegian Medicines Agency on Tuesday said there was no direct link between the vaccine and the deaths. 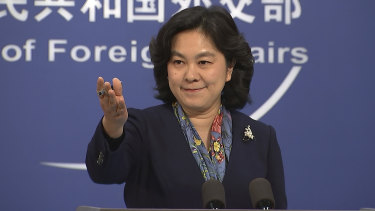 The German Pfizer-BioNTech and US Moderna vaccines have published efficacy rates of more than 90 per cent in their final trials. China's widely-distributed Sinovac Biotech product has been reported by countries undertaking trials as having efficacy rates of between 50 and 78 per cent, but the company has released little publicly available data.

"The general public in those partner countries have also expressed thanks for offering them support and easing their immediate difficulties despite the high demand at home."

The rollout among many of China's economic and political allies will escalate diplomatic jostling as the world attempts to emerge from the pandemic despite all major players, including the United States, now committing to the global COVAX vaccine distribution scheme.

India on Thursday moved quickly to begin its own vaccine distribution among its neighbours, ramping up production of the AstraZeneca vaccine to deliver to Bhutan, Maldives, Bangladesh, Nepal, Myanmar and Seychelles. "This will be calibrated against domestic requirements and international demand and obligations," the country's Foreign Ministry said in a statement.

Hua said China was "observing an abnormal phenomenon now" where western media was pinning geopolitical bias to the Chinese immunisation drive. "They want to promote Pfizer's vaccine and trash Chinese vaccines," she said.

Her comments are the most direct to date in an emerging vaccine divide. Chinese state media outlet The Global Times on Tuesday quoted Chinese immunologists urging Australia to stop the rollout of the Pfizer vaccine despite the Norwegian assurances and purchase "Chinese-developed inactivated vaccines, which are relatively safer due to their mature technology".

Asked whether Chinese state media was hyping concerns about Pfizer to the benefit of its own companies, Hua responded the very idea revealed "the deep-seated ideological bias and appalling injustice against China".

"Aren't Chinese media and netizens entitled to the freedom of speech?," she said. "Whenever there is any negative news about Chinese vaccines, western media always rush to report on it."

Sinovac Biotech has offered limited details on the efficacy of its CoronaVac vaccine, which is now being distributed from Indonesia to Brazil. Clinical trials by Brazilian researchers at the Butantan Institute found it was 78 per cent effective against mild to severe cases but after including very mild cases, the efficacy rate dropped to 50.4 per cent. China's Sinopharm vaccine has a reported efficacy rate of 79 per cent.

World Health Organisation regulators have set an efficacy rate of at least 50 per cent for a vaccine to be worth distributing to help stop the virus that has now killed more than 2 million people around the world.

On Thursday, China reported more than 200 COVID-19 cases as part of a new year surge, after reporting more than 100 cases per day for a week, mostly in Hebei province near Beijing.

Local authorities are attempting to stop the spread of the disease ahead of Lunar New Year by paying residents to stay home. Travel during the holiday season helped propel the disease around the country and the world last year.