The certificate issued by China would have details about the holder’s COVID-19 vaccination information and coronavirus test results, the Department of Consular Affairs under China’s foreign ministry said on its website.

Foreign Minister Wang Yi said the aim of the certificate was to verify information about testing and vaccination, and to contribute to safe and orderly interaction of people across different nations. 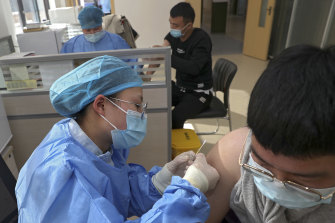 An airport worker in China’s Jiangsu province gets a Sinovac vaccine. Credit:Chinatopix

It was not immediately clear with which countries China was talking to about getting its COVID-19 certificate recognised.

Some countries such as Israel and Bahrain have already introduced certificates identifying vaccinated people and the European Union agreed to develop vaccine passports under pressure from tourism-dependent southern countries.

China has not yet announced any relaxation of quarantine restrictions for people arriving in China who are vaccinated against COVID-19.

The country’s health authorities were studying issues including whether vaccinated travellers to China could be exempted from 14 days of quarantine, the state-owned Global Times reported on Tuesday, citing a person familiar with the matter.

The European Union’s “COVID card” will comprise three documents that will specify if the holder has been vaccinated and with which dose; the results of a coronavirus test if taken; and details on whether they have recovered from a COVID-19 infection, according to a person familiar with the European Commission’s draft regulation.

The EU is racing to develop a system that will allow the 27 member states, and those in the European Economic Area, to reopen their doors to travel while also preventing an escalation in the spread of the coronavirus. The bloc’s leaders unanimously agreed last month on a broad outline for the vaccine certificates, which are a priority for tourism dependent countries like Greece and Cyprus.

The vaccination pass would cover all shots that have been authorised by the European Medicines Agency as well as those that have been granted emergency authorisation by individual countries, said the person, who asked not to be identified because the process is private. Hungary has already started inoculating its population with vaccines manufactured in Russia and China.

The decision to include shots in the certificate that haven’t received European authorisation could prove controversial for some member states who argue that the countries are using vaccines as geopolitical propaganda tools. But it will avoid arguments and restrictions for those countries that have given the shots their approval.

The EU is struggling to boost its vaccination numbers, which have fallen behind other regions. The bloc so far has given 9.4 shots per 100 people, according to the Bloomberg vaccine tracker. That compares with more than 27 doses in the US and more than 35 in the UK.

The commission, the EU’s executive arm, still maintains that it’s on track to meet its target of vaccinating 70 per cent of its adult population by the end of the summer. The bloc also sees deliveries ramping up to as much as 100 million doses a month by the end of March.

The new proposal aims to ensure that restrictions on free movement currently in place to limit the pandemic can be lifted in a coordinated manner. Details in the draft are likely to change ahead of publication, said the person. The regulation will be published on March 17.

The plan comes as several member states have started to weigh options for their own vaccine passports in a bid to save their summer tourism season.

“Tourists will be welcomed if before travel they’re either vaccinated or have antibodies or have been tested negative,” Greece’s Tourism Minister Haris Theoharis told ITB Berlin. “Greece is ready with a complete protocol for summer 2021.”