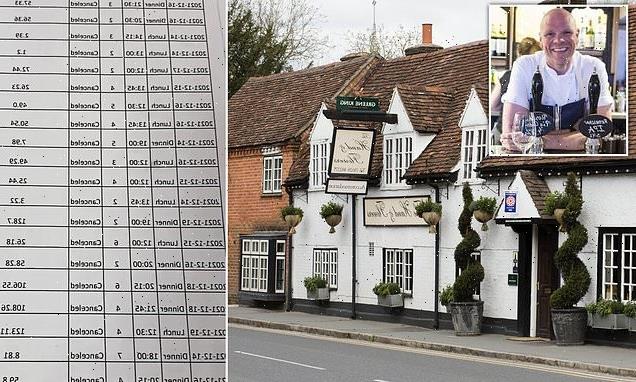 After warnings of an Omicron tsunami saw 654 cancelled bookings in just six days at his restaurant, chef TOM KERRIDGE pleads: Don’t bring us to our knees again

There’s no more important month in the restaurant calendar than December. During its 31 days, many hospitality outlets make 25 per cent of their annual revenue.

And this year in particular, after nearly two years of lockdowns, restrictions and confusion, the pre-Christmas rush promised to give us an opportunity to put our businesses back on an even keel.

But all that went out of the window after the announcement of the Government’s so-called Plan B last week, with the return of mask-wearing, the introduction of Covid passports at some venues and advice to the public to work from home where possible.

Warnings of a ‘tsunami’ of Omicron infections in the days since didn’t help either.

The effect on the hospitality industry was immediate and catastrophic. At one of my restaurants, in the space of just six days, 654 prospective customers cancelled their bookings.

And we are not alone. It’s the same story up and down the country. My fellow chefs report that they have lost up to 50 per cent of their bookings in the past week. 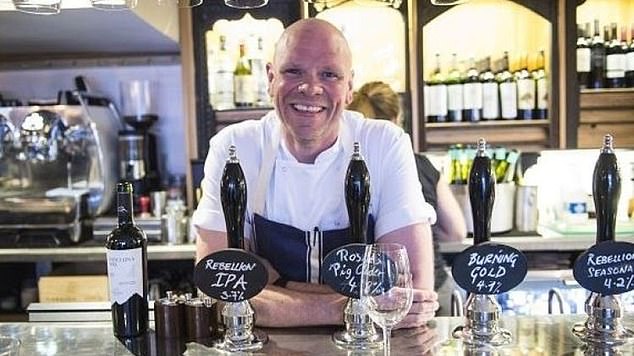 Tom Kerridge (pictured): There’s no more important month in the restaurant calendar than December. During its 31 days, many hospitality outlets make 25 per cent of their annual revenue

I understand that the health of the public takes priority over all other considerations, but what will the Government do to support the victims of this devastating loss of confidence?

There is no safety net for us, no compensation for the plunge in revenue. Many pubs, bars, cafes and restaurants will now implode without help. And before some gammon-faced idiot says, ‘You can afford it, Fat Lad’, I should make clear that, yes, I probably can.

But this isn’t about me or my restaurants. It’s about our industry and about the hopes, dreams and livelihoods of millions of people who work in it.

Businesses have to keep paying staff even if every table is empty but the job-supporting furlough scheme has come to an end and the Government is not proposing any means of reimbursing people for lost business. If they have a plan to prop up the industry, they need to tell us; and if they haven’t, they need to create one as soon as possible.

Personally, I’d have no hesitation about dining out right now. A well-run restaurant or pub is about the safest public space there is.

But I understand why people are worried and cancelling parties or meals out that they have probably looked forward to enjoying for months. 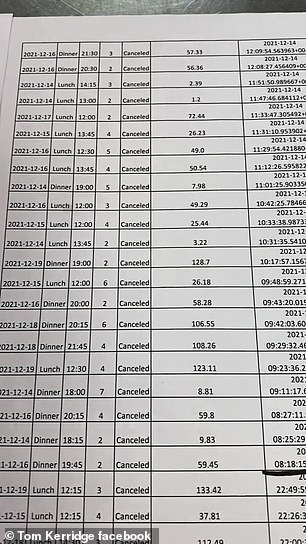 At one of my restaurants, in the space of just six days, 654 prospective customers cancelled their bookings

Nobody wants to catch coronavirus, least of all at Christmas, the time of year when we’re most likely to get together with our extended families, including the most elderly and vulnerable.

All of that I fully appreciate, and I know it’s nobody’s fault. But without support for our industry, the collateral damage to millions of people will be impossible to calculate.

According to a report by UK Hospitality in 2018, hospitality employs 3.2 million workers. That’s 3.2 million families whose income directly relies, in whole or part, on those jobs.

It’s one of the biggest sectors of the economy — even bigger than education or manufacturing. That makes it a powerhouse for the country, generating £130 billion every year, of which £39 billion goes straight to the Treasury in taxation.

In every possible sense — economic, moral, practical — I believe it is crucial that the Government provides support to the hospitality trade. If it collapses, the repercussions will be vast.

I’ve been campaigning for years to win more support for Britain’s struggling pubs. I find it impossible to imagine a Britain without its beloved snugs and fireside pints.

But that’s just the start of the looming disaster, if the whole industry is allowed to founder. Every kind of food and drink establishment is threatened. Numberless thousands of businesses are on their knees.

And if they go, the impact on Britain’s agricultural suppliers — the producers and distributors of fruit and veg, fresh fish, meat and dairy — will be devastating, too. No one should underestimate the financial damage already done by the pandemic. Don’t assume that the furlough scheme covered every cost. It really didn’t. My restaurants have taken a battering — and I’m one of the lucky ones, because we were in a robust position to start with.

Many of my customers have been in touch to offer me sympathy and moral support. I appreciate that very much. I’m also grateful to those 654 people who had the decency to let us know that they were changing their plans. That’s much better than simply failing to turn up.

Back in the summer of 2020, I spoke out when 27 people failed to honour bookings at one of my restaurants, Kerridge’s Bar & Grill in London’s Corinthia Hotel. They didn’t have the courtesy to warn us: they just bailed out. That selfish behaviour was disgraceful and I had no hesitation in saying so. But this time, it is not individuals whose thoughtlessness threatens us. It’s the kneejerk reaction of politicians who act without thinking through the consequences of their actions.

Ever since the emergence of Covid, we’ve been told that ministers are ‘following the science’. But where is the scientific basis for any of Plan B?

Shoppers who walk into a supermarket or any other store have to wear a mask. Drinkers in a pub, on the other hand, are free to sit there, perhaps enjoying a raucous sing-song or yelling at the sports channel on the TV, without masks.

People are encouraged to work from home to safeguard their health — but free to attend their crowded Christmas office parties. 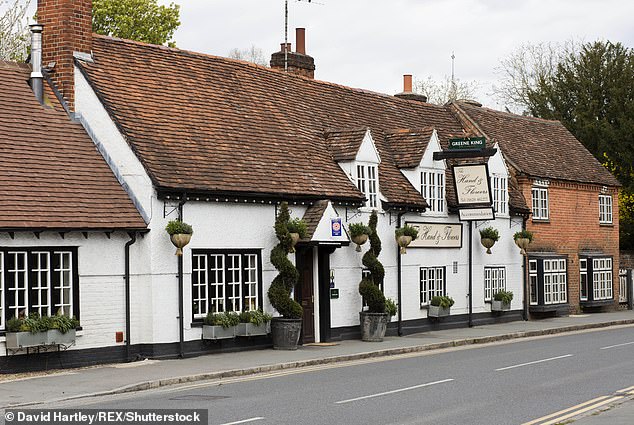 Tom Kerridge is chef-patron of six restaurants, including the two Michelin-starred The Hand & Flowers (pictured) in Marlow, Buckinghamshire

I’m not a doctor. I can’t tell you which of these rules makes sense or whether they are all nonsense. But I do know it’s confusing. How can anyone feel confident about the science behind these conflicting regulations? People don’t know whether they’re coming or going, while the language used by the PM and his advisers becomes more apocalyptic.

The result is that millions are acting with caution. In the absence of clear Government advice, they are having to make up their own guidelines. Inevitably, that means a slew of cancellations for restaurants.

Before the first lockdown in 2020, there was the same mixed messaging when the Government urged the public to avoid going out for food and drink but allowed pubs and restaurants to stay open. And we saw it again during the months of ludicrous ‘tier two’ and ‘tier three’ regulations, when a 10pm curfew obliged businesses to turn their customers out onto the streets.

You might think that, after nearly two years, public health advisers and our political leaders would have learned to plan ahead and avoid such chaos. Instead, apparently ill-thought out, spur-of-the-moment decisions are the order of the day. And it’s not just the hospitality sector. The sudden return to working from home has left all sorts of businesses high and dry, from the newsagents who sell papers to commuters to street vendors, the independent coffee stands, hairdressers and even flower-sellers.

I’m willing to bet that every one of these small businesses was hoping and praying for a good Christmas, just to help them out after a dire year.

Yet, like the hospitality sector, they have had the ground cut from under their feet just as we were seeing signs of progress.

My industry is full of creative people. We love our work and we make a magnificent contribution to the country in many ways. But right now we’re staring into the void. Without immediate financial support, a lot of businesses will not be reopening in 2022.

Tom Kerridge is chef-patron of six restaurants, including the two Michelin-starred The Hand & Flowers in Marlow, Buckinghamshire.