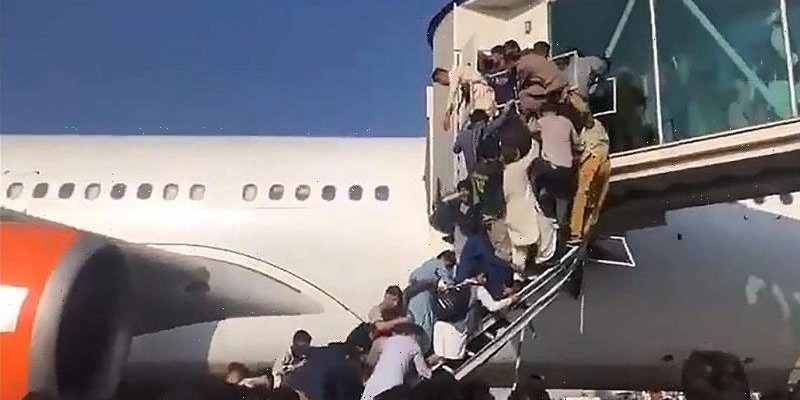 There have been chaotic scenes at Kabul International Airport as thousands of Afghans tried to flee the country, now under Taliban rule, with some clinging onto the outside of US military aircraft as it moved across the tarmac and reports of up to five people killed.

The airport is still under US control. The Taliban have taken control of the capital and declared that the war was over.

“Thanks to God, the war is over,” Mohammed Naeem, a spokesman for the Taliban’s political office told Al Jazeera TV.

But at the airport, where the US and British have relocated their embassies, there was panic and desperate scenes, with many fearing chaos and a return to the Taliban’s repressive rule after thousands of prisoners were freed.

Thousands of Afghans raced to Kabul’s international airport which is under military control hoping to catch a flight out but commercial flights have been suspended since Sunday.

Video recorded by an Iranian journalist at the airport shows hundreds of men run running as the repeated sound of gunfire could be heard. US troops fired warning shots as they struggled to contain the chaos.

Witnesses told Reuters they had seen five bodies, but it was not clear if they had died from stampede or gunshots.

Another clip showed dozens of men clinging to the side of a US military aircraft as it taxied across the tarmac with hundreds more running alongside it.

On Sunday, the Afghanistan President Ashraf Ghani fled the country, abruptly ending the Western-backed government, signalling a triumphant return of the Taliban who were ousted from the capital two decades ago, when the US began it’s longest-ever war after the September 11 attacks.

The US-trained Afghan army barely put up a fight as the Taliban advanced across the country in just over a week, culminating in the seizure of the capital, in a mostly peaceful manner, on Sunday.

Taliban fighters entered the city after Ghani fled, having been instructed to wait outside the city until the government had surrendered.

On Monday, they began collecting weapons from civilians, with a Taliban official saying citizens no longer needed them for their own personal protection.

“We understand people kept weapons for personal safety. They can now feel safe. We are not here to harm innocent civilians,” the official told Reuters.

There were scattered reports of looting and armed men knocking on doors and gates, and there was less traffic than usual on eerily quiet streets. Fighters could be seen searching vehicles at one of the city’s main squares.

with AP and Reuters