Taipei: Human waste and sewage dumped in the South China Sea is causing lasting damage to fragile reefs and marine life, according to US experts tracking the environmental catastrophe from space. 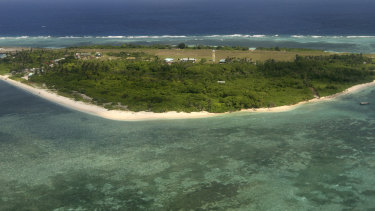 An aerial view of Pag-asa Island, part of the disputed Spratly group of islands, in the South China Sea.Credit:AP

A Simularity Inc report used satellite images over the past five years to show how raw sewage had caused algae in reefs in the Spratlys archipelago where China has territorial claims and Chinese ships often gather in batches.

“When the ships don’t move, the poop piles up,” Derr told an online conference.

“This is a catastrophe of epic proportions and we are close to the point of no return,” she said, warning that fish, including migratory tuna, breed in the reefs that are being damaged and could cause fish stocks to decline in an area that is a key regional food source.

Another investigation contrasted algae build-up in the Union Banks atoll in the Spratlys with similar reefs that were free from human activity.

Hughes Reef in the South China Sea: the loss of dark areas (where there used to be a lack of chlorophyll) show that it has concentrated over the past five years, amid China’s naval presence in the area. Credit:Simularity

“There is significant evidence that the Union Banks reefs are being damaged by “excess nutrients” and have more reef degrading macroalgae than similar reefs which are not occupied,” it concluded.

Derr said: “The right thing to do, and this has been proposed by a number of scientists, is to make the Spratly Islands a no-catch marine protected area. Those coral reefs are critical to the lives of all the people who live along the shore,” she said.

The Spratlys lie at the centre of a territorial dispute between China, Taiwan, Malaysia, the Philippines, Vietnam and Brunei, and Vietnamese forces have also occupied some coral outcrops in Union Banks. 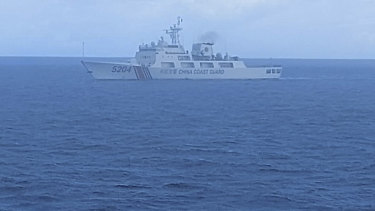 A Chinese Cost Guard ship in the South China Sea.Credit:AP

A diplomatic spat erupted this year between the Philippines and China when Manila ordered hundreds of Chinese boats to leave the Whitsun Reef, which it maintains is within its 200-mile exclusive economic zone.

But Derr said satellite images over the past month suggested that more than 100 ships had moved away from the Union Banks and were no longer anchoring in long strips.

Her company is working with the US State Department and embassy in Manila to help the Philippines government purchase its software and services to help monitor the coastline.

She said she had been taken aback by the strength of the international response to the research.