Candace Owens blasted Barack Obama on Thursday night, accusing him of turning his back on the country and stating that he was the only president who had ever come out of the White House ‘hating America’.

The author told Fox News’ Sean Hannity that Obama’s recent comments about the Republican party and racism in the United States were ‘absolutely despicable’ as white Americans had voted him into office.

She also accused him for showing a lack of respect to those who voted for him who ‘gave him literally everything he has.’

Owens took a hit at the Democratic party in general as she accused them of seeing black voters as a ‘means to an end’ and said that the Obama presidency did nothing to help black people because the party wants them to be a ‘permanent voting block’.

The activist was speaking in answer to a question about Obama claiming in his upcoming memoir ‘A Promised Land’ that Republicans are xenophobic and paranoid. 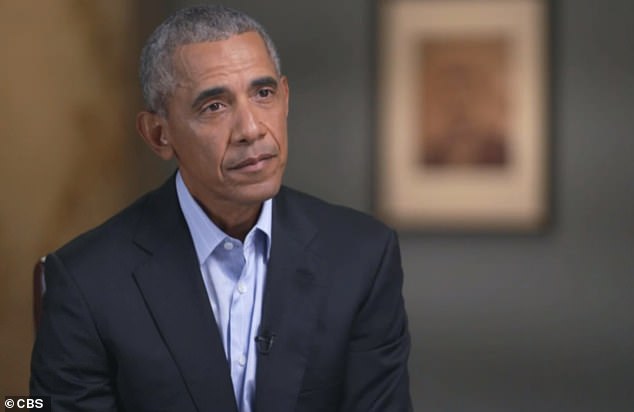 Owens accused Obama, pictured, of having turned his back on the country

Obama claimed that Trump was given the boost he needed to win the presidency because of the increased racial tensions caused by a black man being in the White House.

He also claimed they president was ‘delegitimizing democracy’ and placing the country on a ‘dangerous path’ in a clip of an interview with ’60 Minutes’ released on Thursday.

‘The language that he’s using, the rhetoric that is coming out of former Barack Obama’s mouth is nothing short of absolutely despicable in my opinion,’ Owens told Hannity of the book’s accusations about Republicans.

‘This is a man who ran on the American dream. Everyone remembers where they were the night Barack Obama won. There was a kinetic energy on the ground it felt like we finally had arrived at a place in this country where we could put the past on the past.

‘Rather than sow some unity, rather than show some respect for this country that gave him literally everything he has, he turned his back on the country and he said look at this despicable country, it’s broken,’ she fumed. 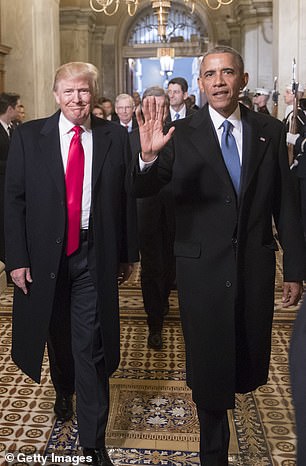 Hannity also asked Owens about why more black voters turned to Trump in the 2020 election, launching her into a scathing takedown of the Democratic Party.

‘I’ll tell you why,’ Owens said in response to Hannity’s claims of increased opportunity for black Americans under Trump.

‘What Democrats do is they look at the black voters and they see them as a means to an end. They don’t ever want to repair the issues that are in black America because they want them as a permanent voting block and that’s just the truth.

‘And what is remarkable to me is is that they can’t look and assess things as they are.’

She claimed that Trump has been called racist more than ‘anyone else whose ever walked the face of the planet’ but that he still managed to increase his black voters this year.

‘Maybe it’s because we are getting something wrong,’ she said of the Democrats.

‘There is something happening and people are standing behind Donald J. Trump because he’s an effective and a good leader who tells the truth and doesn’t run on identity politics.’

According to early voting data compiled by NBC, Trump picked up 20 percent of black male voters – an increase of two percent on 2016.

While 80 percent voted for Joe Biden, that figure was down from 82 percent for Hillary Clinton and from 95 percent for Obama.

More than half – 52 percent – of black men who identified as ideologically conservative cast their vote for the president and 1 in 3 black men living in the Midwest also voted for him.

Owens has been a vocal critic of the election result and insists that Trump is the winner, despite Joe Biden being named president-elect.

She has pushed the same false claims of voter fraud as Donald Trump on her social media accounts.

Owens has been a vocal critic of the election result, believing Trump to be the winner, and is pushing the same baseless claims of voter fraud of her social media account as Trump

Joining Owens on Hannity on Thursday night was civil rights attorney Leo Terrell who also accused Obama of blaming failure in his presidency on racism.

‘This is a man who was now using racism as a basis to justify his failure and he’s playing the race card. He’s right about one thing, it did give Donald Trump the rise because Donald Trump asked black Americans what do you have to lose? You just had eight years of Barack Obama, nothing happened.. ‘A Promised Land’ is out on November 17

‘They look at performance,’ he said of black Trump supporters, ‘and in those four years of Donald J. Trump he’s done more than eight years of Obama and Biden and that’s what frustrates Barack Obama. That’s why he has to go to the race card.’

Terrell and Owens comments came after excerpts of Obama’s upcoming memoir were revealed earlier on Thursday in which he speaks to race relations in the U.S.

In the 768-page tome, published on November 17, Obama reflects on his political career but divulges in the personal, admitting life in the White House increased his smoking habit and caused tension in his marriage.

‘It was as if my very presence in the White House had triggered a deep-seated panic, a sense that the natural order had been disrupted,’ Obama writes in the book, which was obtained by CNN.

Donald Trump, he claims, sensed the country’s mood and took advantage of it to win the White House in the 2016 election.

‘Which is exactly what Donald Trump understood when he started peddling assertions that I had not been born in the United States and was thus an illegitimate president. For millions of Americans spooked by a Black man in the White House, he promised an elixir for their racial anxiety,’ he writes. 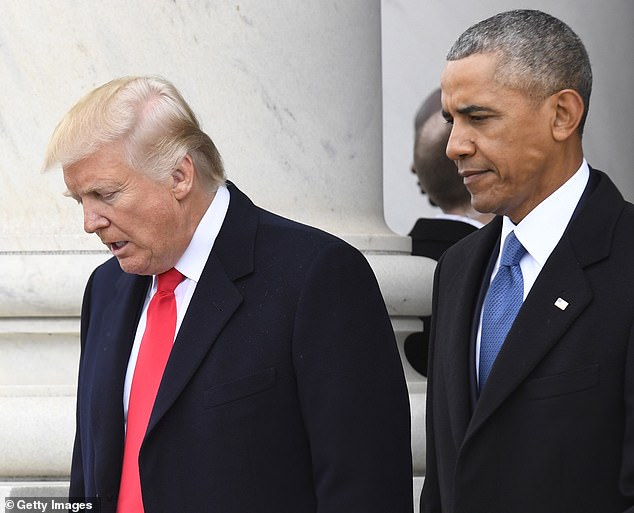 Obama, pictured with Trump, believes that the president is incapable of admitting defeat

Also released on Thursday was a clip of Obama’s first TV interview since the election where he told CBS’ ’60 Minutes’ that he believes the country is on a ‘dangerous path’ as he hit out at members of the Republican party for standing with Trump on his claims of election fraud.

He claimed that they were a result of Trump being incapable of admitting defeat but that he was more troubled by the fact that certain members of the GOP are standing with him in the claims.

‘They appear to be motivated, in part, because the president doesn’t like to lose and never admits loss,’ Obama in a clip from the interview released by CBS on Thursday evening.

‘I’m more troubled by the fact that other Republican officials who clearly know better are going along with this, are humoring him in this fashion,’ Obama added.

‘It is one more step in delegitimizing not just the incoming Biden administration, but democracy generally. And that’s a dangerous path.’