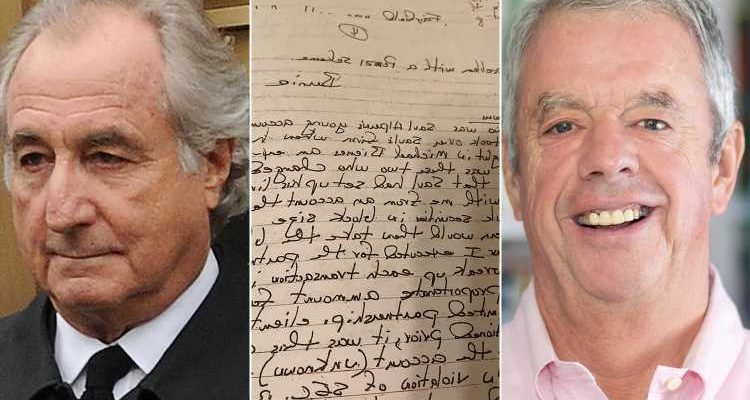 Ruth Madoff is living in a $3.8M waterfront home

For 12 years, business journalist Jim Campbell has interviewed members of Bernie Madoff’s family and exchanged letters with the fraudster himself in prison. His new book, “Madoff Talks,” comes out in two weeks. Here, Campbell reveals some of what he learned about the notorious case.

“Jim, I have no problem with what you have laid out,” Bernie Madoff wrote to me from prison, in exquisite cursive, about my request for an interview. “I must add that both Andy and Ruth felt good about your sincerity.”

I never imagined becoming pen pals with perhaps the most vilified person on the planet. Nor did I expect to end up with more than 400 pages of communications with Bernie Madoff, including e-mails and some multi-page, single-spaced handwritten letters, which always rationalized in tremendous detail his every illicit move.

It was interesting that he claimed his son Andrew had vouched for me. From the instant Bernie confessed to the family on the afternoon of the day before his arrest, on Dec. 11, 2008, Andrew never said another word to his father. Ever. Even when I suggested he should if only for his own closure, he snapped: “never, he’s dead to me.”

I had spoken to Andrew at a time he was under legal investigation by the Feds. Andrew introduced me to Ruth Madoff, who in pure coincidence, was moving to Old Greenwich, my hometown. I offered to take her to lunch. As with Andy, I was surprised how open she was to my questions. She devoured her salad as if she hadn’t eaten in weeks. Upon leaving, I asked if we could take a picture. She stopped instantly: “You’re wired aren’t you.” To which I assured her I was not. It led to several years of lunches.

Whatever you think of her, Ruth is a resilient woman. She had lost $800 million of net worth; her husband she had started dating at the age of 13 was in prison for 150 years; her son, Mark, committed suicide two years to the day after Bernie’s arrest; and her remaining, son, Andrew, was dying of cancer.

Andrew, his head balding from chemotherapy, once told me: “He killed Mark quickly; and he’s killing me slowly.”

Ruth had to submit a receipt for any expense over $100 to the SIPC Madoff Recovery Trustee. Her life, in other words, was circumscribed. She told me how deeply she was hurt too, by the fact she’d learned Bernie had cheated on her.

Bernie was likeable, hardly a Gordon Gekko type. I told him he was such a good con man, precisely because he wasn’t trying to be one. All this money was shoveled into him by the feeder hedge funds, who were willfully blind to his actions in return for the “management fees” — really thinly veiled bribes — he passed along. They asked no questions. Not a single one of them have ever been charged criminally.

In 12 years of letters and lunches with Bernie, Ruth and Andrew Madoff, I learned:

I assumed there must be some logic to his starting the fraud, like a big loss that led him to make the classic gamblers mistake and double down to make it up.

But the truth turned out he built the legit and the Ponzi scheme together at the same time going back as far as the 1970s. Everything was separate. His administrative assistant in the legit business made $125,000 with no IRA. His administrative assistant in the Ponzi scheme made $670,000 and had a $58 million (albeit fake) IRA. On the 19th floor of the oval shaped Lipstick building he hired top caliber business school grads coupled with leading edge technology to do legit work.

On the 17th floor, under lock and key, which even his sons lacked access to, he hired high-school grads specifically for their lack of sophistication; and he used archaic 1980’s technology relying on an obsolete IBM AS/400.

He could not psychically accept any investment losses — an oxymoron on Wall Street. Bernie made money on commissions in the legit business, whether stocks went up or down. A good fit for his psychology.

But the Ponzi hedge fund he was exposed to losses. That turned out not to be a good fit. So he simply stopped trading and made up his results.

Bernie had convinced himself that he could have pulled off the Ponzi fund legitimately, even though he was theoretically trading in figures bigger than the entire market. He would write me intricate explanations of the moves he would have made before sheepishly adding: “Jim I do realize none of these trades actually happened.”

In truth, Bernie had a file he called “shtup” — Yiddish for “push up” or “sex.” When it was near year-end and a client was short of his “guaranteed” return, Madoff would use the shtup program to figure out how much of a gain he’d have to magically create to hit the promised mark. It was sleight of hand, not skill.

Friends and family were not off-limits. Madoff helped a pal mourn his handicapped wife, then fleeced him of $250 million.

One day, as they walked out the door, Bernie casually grabbed the ass of one of his son’s significant others.

The day she allegedly found out for the first time about the scheme, Ruth Madoff was described to me as highly agitated in the office when she came to ostensibly distribute Christmas gifts. She also suddenly withdrew $10 million dollars. But she claims to me that the very first thing she said after Bernie confessed: “What’s a Ponzi scheme?”

Even if Ruth didn’t know, she certainly benefited from his ignorance.

I got a look at the corporate credit card statement for Madoff’s company. Ruth was spending $57,000 — a month.