Beijing: China says it will take "necessary measures" to protect the legal interests of Chinese firms, reiterating it strongly opposes moves by the Trump administration to ban downloads and transactions on WeChat and Tiktok.

The US Commerce Department issued a ban on the apps on Friday, citing national security concerns. Commerce Secretary Wilbur Ross said the US would bar WeChat, a tool for messaging and money transactions, and its parent Tencent Holdings from letting users send funds to friends, family or companies. It also blocked business relationships with certain third-party technology providers starting on Sunday.

The ban affects only new downloads and updates and are less sweeping than expected, particularly for TikTok, giving its parent group ByteDance some breathing space to clinch a sale agreement of its US operations and prompting some analysts to say it was a move by the Trump administration to secure a better deal for an American purchaser. 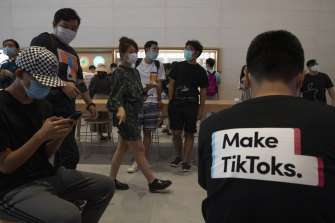 A visitor to an Apple store in Beijing wears a T-shirt promoting TikTok.Credit:AP

"The US has, with no evidence, employed national powers to 'hunt' and suppress the two businesses on groundless bases," the Chinese Ministry of Commerce said in a statement on Saturday. "This has severely interfered with normal business activities and harmed the confidence of global investors in the US investment environment, and damaged a normal international trade order."

The statement didn't specify what actions would be taken against the US but shortly after the country's Commerce Ministry issued rules on its proposed list of "unreliable entities", saying it would target foreign firms and individuals endangering China's sovereignty and security.

After Trump imposed additional tariffs on Chinese goods and curbs on Huawei last year, China vowed to draw up a list aimed at punishing foreign firms deemed harmful to Chinese interests. It has yet to publish the list. 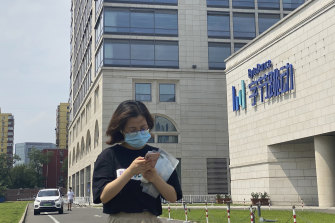 A woman checks her phone outside the headquarters of TikTok owner ByteDance in Beijing. Credit:AP

State-run tabloid Global Times had previously said the measures would target such companies as Apple, Cisco and Qualcomm, while suspending purchases of Boeing aeroplanes.

The ministry said the list would help "safeguard national sovereignty, security and development interests, maintain a fair and free international economic and trade order, and protect the legitimate rights and interests of Chinese enterprises, other organisations or individuals."

Authorities would set up a working mechanism and an office to help implement work related to the list, it added. It would prohibit foreign firms listed as unreliable entities from engaging in import, export and investment in China.

Foreign firms could be removed from the list if they corrected their behaviours and takes steps to eliminate the consequences of their actions, it said.

Meanwhile, Tiktok said it disagreed with the decision and would "continue to challenge the unjust [Trump] executive order, which was enacted without due process". WeChat users in the US have revived their request in court to block the restrictions on the messaging app, while downloads surged on Friday ahead of Sunday's deadline.