Washington: International experts have accused the Chinese government of violating every provision in the United Nations genocide convention.

A landmark report released on Tuesday by the Washington-based Newlines Institute for Strategy and Policy condemned Beijing for its treatment of the estimated 12 million Uighurs in Xinjiang province.

Running at 25,000 pages, the report, prepared by a panel of more than 50 experts in international law, was the first independent investigation of the allegations of genocide. 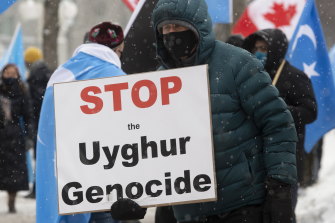 Evidence was drawn from Uighur exiles and documents from the Chinese government itself.

The 1948 UN convention stipulates five acts that constitute genocide: killing members of a group; inflicting serious bodily and mental harm; trying to prevent births; transferring children to another group; and creating living conditions designed to bring about the group’s destruction.

Beijing was in breach of all five provisions, the report concluded, adding that there was “clear and convincing evidence” that responsibility lay with the ruling Chinese Communist Party. China is one of 152 countries which signed the convention. Up to 2 million Uighurs and Muslims are estimated to have been placed in a network of 1400 detention and re-education camps. 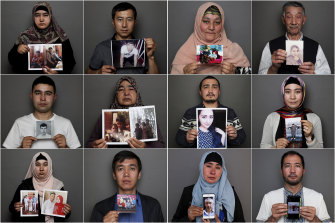 Uighurs in Australia with photos of relatives who are in internment camps, are missing or have died.Credit:Alex Ellinghausen

According to the report, Beijing had targeted “guardians of the Uighur identity” for execution and prolonged imprisonment. Those singled out included heads of household, intellectuals and cultural leaders.

“There is at least one confirmed report of mass deaths within an internment camp,” the report noted.

“Newly built crematoria in the region indicate that authorities may be concealing the overall number of deaths and torture within the camps.”

The report cites explicit government orders to “eradicate tumours”, “wipe them out completely” and “show absolutely no mercy”.

These policies were coordinated at the highest levels of the Chinese state and “relentlessly implemented by a bureaucratic line of entities and officials all the way down to the internment camp guards”, the report added.