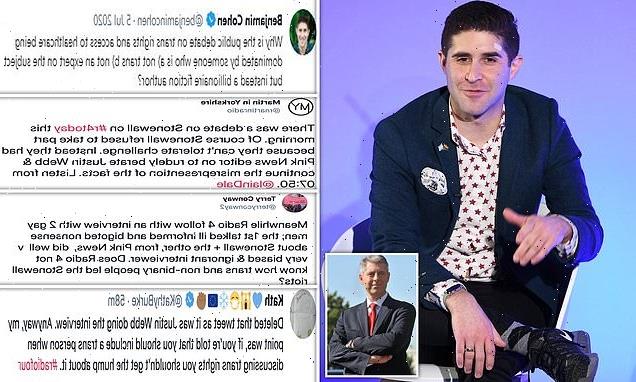 ‘You don’t know anything about me!’: BBC Radio 4 host Justin Webb in furious clash with Pink News CEO who attacks him for being ‘cisgender’ during ‘car crash’ interview over controversial Stonewall stance on transgender rights

Radio4 presenter Justin Webb furiously clashed with the CEO of a LGBTQ+ publication this morning during a debate on transgender rights, telling him ‘you don’t know anything about me’.

Benjamin Cohen, CEO of PinkNews, was invited onto the Today Programme to discuss what Webb described as the charity Stonewall’s attempts to ‘abolish legal provisions for same-sex spaces’ – a move opposed by some women’s rights groups.

However Mr Cohen – who spoke alongside Simon Fanshawe, co-founder and former member of Stonewall – highlighted the fact that the BBC had failed to include ‘a single trans voice’ in the debate on transgender rights, instead having two gay male cisgendered guests on to speak.

The PinkNews CEO also said that Webb was incorrectly claiming that Stonewall intended to make all single-sex spaces accessible to anyone who ‘self ID’d’ as a woman or man. 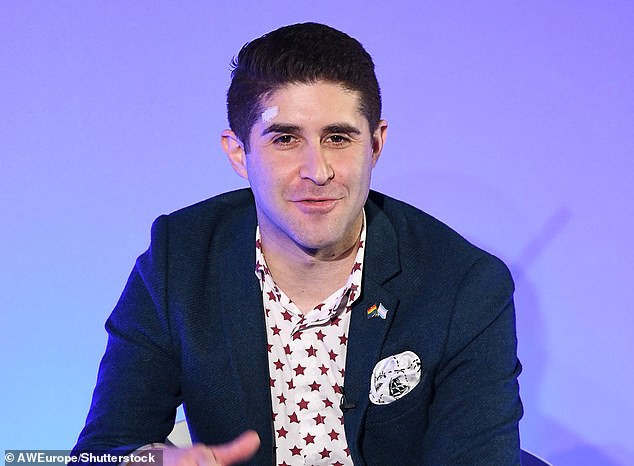 Benjamin Cohen, CEO of PinkNews, highlighted the fact that the BBC had failed to include ‘a single trans voice’ in the debate on transgender rights

After being asked whether if was ‘perfectly acceptable’ for women to campaign for single-sex spaces not to include those who have changed gender, Mr Cohen initially refused to answer the question, telling Webb: ‘The BBC has decided to have a debate with two different gay people talking about trans issues, and it’s quite odd.

Webb then hit back: ‘Number one, you don’t know anything about me. Number two, I asked you a question would you answer it.’.

Mr Cohen continued: ‘You made the statement which is that the provisions around who gets access to single sex Spaces has changed. That hasn’t changed. The Equality Act was passed in 2010, there’s been no changes to that.’

Webb replied: ‘What I’m suggesting is Stonewall would like to change it. And a lot of women are worried about that.’

Actress Kathy Burke tweeted: ‘If you’re told that you should include a trans person when discussing trans rights you shouldn’t get the hump about it’ 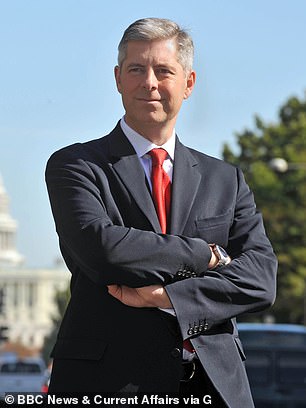 To which Mr Cohen said: ‘You just claimed that, but that’s not actually true. So Stonewall supports self ID, which is simply about paperwork. So you’ve been able to self ID for practical purposes for the Equality Act since 2010, that’s 11 years ago.’

When asked if safe spaces for women such as women’s refuges were ‘protected’ in Stonewall’s campaign, Mr Cohen said they ‘continue to be protected’ and said he didn’t believe Stonewall had said ‘that those spaces should be open to trans people.’

Stonewall states on it’s website that it recommended to the government’s Women and Equalities Select Committee on Transgender Equality in August 2015: ‘A review of the Equality Act 2010 to include ‘gender identity’ rather than ‘gender reassignment’ as a protected characteristic and to remove exemptions, such as access to single-sex spaces.’

During today’s three minute discussion Mr Cohen and presenter Webb continually interrupted each other – with listeners taking to social media to criticise both Webb and the guest’s approach.

Actress Kathy Burke tweeted: ‘If you’re told that you should include a trans person when discussing trans rights you shouldn’t get the hump about it.’

Whilst campaign group Women’s Place UK tweeted: ‘Benjamin Cohen CEO P*nk News claims it is untrue that the organisation is campaigning for the removal of the single sex exemptions in the Equality Act… It is.’

The car-crash interview comes as the LGBTQ+ rights group Stonewall is facing a Whitehall exodus from its diversity scheme amid concerns over its ‘extreme’ stance on transgender rights.

Government departments, led by the Ministry of Justice, are beginning to question the ‘value for money’ of belonging to a league table of employers which is compiled by the lesbian, gay, bisexual and trans charity.

Robert Buckland, the Justice Secretary and Lord Chancellor, is understood to be preparing to withdraw his department from the scheme.

Critics of the equality group say its pronouncements on trans issues are anti-free speech.

Last week it emerged Stonewall had advised organisations to boost their rankings on its equality ratings table by replacing the term ‘mother’ with ‘parent who has given birth’.

It also tells member organisations that those who self-identify as women must be allowed to use female lavatories and changing rooms, a stance that has angered some feminists.

‘It’s a shame, as this was once an organisation that did incredibly important work, but it has totally lost its way and the ministers just don’t think it’s justifiable to give Stonewall taxpayers’ money,’ an MoJ source told the Sunday Telegraph.

‘The department will be just as welcoming to LGBT people as before, but we really shouldn’t be paying thousands of pounds for controversial advice about pronouns and gender-neutral spaces.’

The source predicted the MoJ would be the first in an ‘exodus’ of Government departments.

Several organisations, including the Equality and Human Rights Commission and the employment dispute service Acas, have pulled out of Stonewall’s Diversity Champions scheme blaming cost reasons. On Friday it emerged that Channel 4 had also withdrawn.

The Stonewall scheme has 250 Government departments and public bodies among its members. They pay thousands of pounds for guidance and are ranked on the charity’s Workplace Equality Index for their ‘progress on lesbian, gay, bi and trans inclusion in the workplace’.

‘It has totally lost its way’

Stonewall: The controversial LGBT charity which has come under fire in recent weeks

Just this week, the Equalities Minister Liz Truss said she wanted the Government to quit a diversity scheme run by Stonewall amid a row over trans rights.

Miss Truss is said to be pushing for departments to join the Equality and Human Rights Commission (EHRC) and Acas in dropping the Diversity Champions scheme over fears it is not providing value for money.

After criticism from the gay former Conservative MP Matthew Parris, Ms Kelley told the BBC: ‘With all beliefs including controversial beliefs there is a right to express those beliefs publicly and where they’re harmful or damaging – whether it’s anti-Semitic beliefs, gender critical beliefs, beliefs about disability – we have legal systems that are put in place for people who are harmed by that.’

According to Stonewall there are more than 850 organisations, including 250 government departments and public bodies such as police forces, local councils and NHS trusts, signed up as ‘diversity champions’.

Membership to the scheme starts at around £2,500, which according to the LGBT charity’s website, buys employers access to expert advice and resources to make their workplaces ‘inclusive’.

However, the charity was embroiled in a new row over transgender rights last week, when its chief executive Nancy Kelley likened ‘gender critical’ beliefs to anti-Semitism as she defended its pro-trans campaigning.

The EHRC, Britain’s equalities watchdog, then cut ties with a Stonewall scheme for ‘woke’ workplaces after claims that it curbs free speech among staff.

Its decision comes amid accusations the scheme is encouraging public bodies and firms to adopt policies that create a ‘culture of fear’ among workers who disagree with transgender ideology.

A letter to the feminist campaign group Sex Matters from new commission chairman Baroness Falkner revealed: ‘We wrote to Stonewall in March to let them know that we would not be renewing our membership, and this has now expired.’

Before that, a former top judge claimed transgender groups such as Stonewall are having too much say over hate crime laws that could cause freedom of speech to ‘suffer’.

Charles Wide, a retired Old Bailey judge, said last month only an ‘limited range’ of views was being sought out to advise on a possible expansion of legislation.

The government currently looking at expanding hate crimes, and the Law Commission is consulting on whether misogyny, age, sex workers, homelessness, and some subcultures should become protected groups.

But the judge fears the Commission’s over reliance on certain campaign groups has seen it move away from its non-political brief to draw on ‘contentious and controversial sociological theories’.

Writing for the think tank Policy Exchange, he said: ‘No adequate thought seems to have been given to the difficulty of reaching beyond a limited range of academics and organisations to the full variety of academic voices, organisations, commentators and members of the public who have no organisation to speak for them.’

He singled out LGBT campaigners Stonewall, saying the Commission was treating them more like ‘a consultant than consultee’.