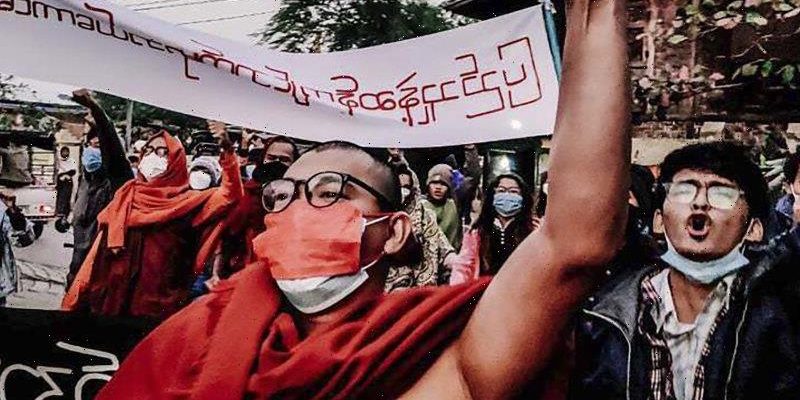 Bangkok: The gunman entered the small government office in central Myanmar, walked up to the man in charge and shot him four times in the head. “You are the ward administrator!” the gunman shouted, according to a brief video clip that captured part of the shooting.

U San Mu, the military-appointed ward administrator of Kyakan village, fell dead at his desk as the assassin and an accomplice fled by motorbike. Hours later, a resistance group known as Nga Pyae Ma claimed responsibility for the killing, posting the video clip on Facebook and Telegram. 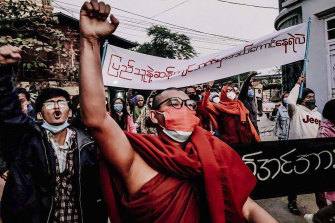 A Buddhist monk raises his clenched fist while marching during an anti-military government protest rally on February 1, 2022, in Mandalay, Myanmar. Credit:AP

A spokesperson for Nga Pyae Ma said in an interview that the group targeted San Mu because he had collaborated with the military regime that seized power in Myanmar last year.

“Local people were unjustly arrested and tortured by the military because of him,” said the spokesperson, who uses the nom de guerre Bo Nga Khu. He added that he took the video and drove the getaway motorbike. “He was warned several times before being killed, but his actions did not stop.”

Across Myanmar, assassinations have become a regular tool of the resistance. More than 400 local armed groups like the Nga Pyae Ma have formed since the coup; many carry out targeted killings for which they later claim responsibility. The assassinations come as the movement to restore democracy has evolved into deadly warfare between a ruthless, well-supplied military known as the Tatmadaw and a resistance movement that has broad public support but limited weaponry.

The shadow National Unity Government, which was formed by ousted elected officials and some ethnic leaders, says it is waging a revolutionary war against the regime. The conflict has taken a huge toll on the civilian population. Nearly 1 million people have been displaced, the economy has contracted sharply and the health care system is in crisis, even as the military blocks delivery of humanitarian aid. 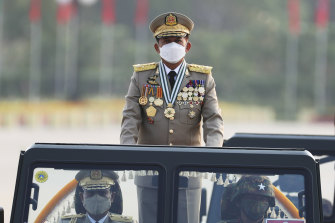 U Naing Htoo Aung, the unity government’s Defence Ministry secretary, said ward administrators are legitimate targets because they engage in “the surveillance and coercion of the public” and are essential to the regime’s “dictatorial control of the country.”

The unity government’s People’s Defence Force has more than 60,000 fighters organised into battalions, he said, and a similar number make up local resistance groups such as the Nga Pyae Ma. The organised battalions are mainly engaged in fighting the Tatmadaw in the jungles, while the resistance groups operate in towns and cities, where they carry out guerrilla attacks.

Although Russia’s invasion of Ukraine has overshadowed the fighting in Myanmar, clashes between the Tatmadaw and resistance forces take place daily. The National Unity Government says it now controls half the country’s territory, although most of that is in the hands of armed ethnic groups that have long battled the military in remote borderlands.

The unity government claims that at least 14,890 regime soldiers have died in the fighting, while it has lost just 1000 fighters. The regime refuses to discuss casualty figures. But earlier this year, the junta acknowledged that military-appointed ward administrators were being killed at a rate of more than one a day. Nearly as many have been wounded. Many were shot in their homes or offices; one resistance group claimed responsibility for gunning down a ward administrator while he was flying a kite. 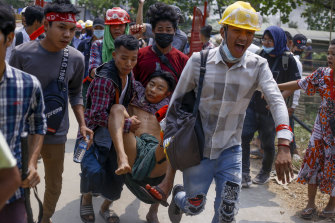 Zachary Abuza, a professor at the National War College in Washington, said the People’s Defence Force has done surprisingly well on the battlefield and has upgraded its arsenal by capturing weapons.

As the war in Ukraine continues to drain Moscow’s resources, he said, the Tatmadaw will find it harder to get weapons, ammunition and replacement parts from Russia, a major supplier. Unable to contain the rebel forces, the Tatmadaw has mounted continuing attacks on the civilian population, Abuza said, including torching villages and waging a relentless bombing campaign.

“The reliance on arson, indiscriminate artillery fire and air attacks is indicative of a loss of control on the ground,” he said. “The Tatmadaw is experiencing an unprecedented degree of casualties and defections. They are now having to fight and defend supply lines in places that were previously secure.” 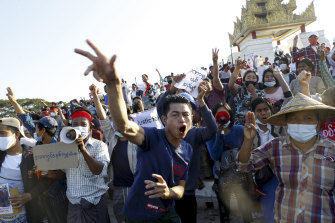 Demonstrators flash a three-fingered symbol of resistance against the military coup and shout slogans calling for the release of detained Myanmar State Counselor Aung San Suu Kyi during a protest in Mandalay, Myanmar in February 2021.Credit:AP

He added, “I think we are looking at a long stalemate.”

Local resistance units are not the only ones carrying out assassinations. In recent weeks, armed groups tied to the regime have stepped up their own campaign of targeted killings. According to the National League for Democracy, which shared power with the military before the coup, at least 18 of its members and supporters have been killed by regime-sponsored groups since late April.

Family members said the victims were taken from their homes and driven away in military and police vehicles. Their bodies were found the next day, dumped by roadsides.

The military began replacing thousands of locally elected ward administrators with regime supporters soon after the coup on February 1, 2021. Many of its appointees were quickly accused of being informers, known as dalan, who handed suspected rebels over to security forces to be imprisoned and tortured. 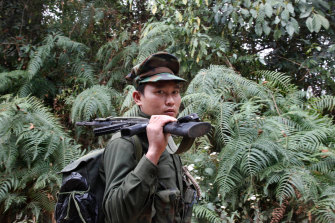 In this March 17, 2018, photo, a Kachin Independence Army fighter walks on a jungle path in an area controlled by the Kachin rebels in northern Kachin state, Myanmar. Credit:AP

One such ward administrator was U Tun Naing Oo, from a district near Mandalay, the second-largest city in Myanmar. He was shot dead in the street in January by a local resistance group calling itself the Zarmani Guerrilla Force. The group claimed responsibility for the assassination on Facebook in slang meant to circumvent censors, saying he was “taken to the dog’s path,” meaning killed, “by four lipsticks,” or bullets.

A neighbour, Ko Than Soe, said the targeted official had been the local leader of a pro-Tatmadaw militia and had informed on resistance fighters. “He more than deserves to be dead,” said Than Soe. “Even though he is dead, I would say he is lucky because his family is still safe.”

No one has been arrested or charged in the killings of ward administrators.

Perhaps the resistance groups’ most prominent target is the deputy governor of the Central Bank, Daw Than Than Swe, who was shot and wounded by a gunman in April at her Yangon home. A local resistance force claimed responsibility.

But such guerrilla warfare tactics, with the risk of mistaken killings, can sometimes backfire, alienating people previously sympathetic to the rebel cause.

In February, attackers from the rebel group Zero Guerrilla Force in central Myanmar shot and killed a retired government employee, saying he was dalan and a militia leader supporting the Tatmadaw.

Friends and family members said the victim, U Myint San, 65, was a literature lover who started a library with his own money and encouraged children to read. He had also donated money to a local resistance group, his son said.

“U Myint San was a good person who did good for the community,” said Ko Si Thu, the leader of a local activist group, suggesting he may have been set up by someone with a grudge. “He was not dalan. He has been active in the revolution since the coup.”

The Zero Guerrilla Force leader, U Thet Naing Aung, said the group acted on information from another local rebel group in assassinating U Myint San. “If he was killed by mistake, we will apologise only after the revolution,” he said. “Now I want to focus on the revolution.“