April was the quietest EVER month in A&E as attendances HALVED in two months with 900,000 seeking urgent medical help, official figures show

April was the quietest month ever for A&E departments across England, NHS statistics have revealed.

Only 916,581 emergency department visits were recorded in the month that Britain’s coronavirus crisis peaked – the first time on record the number has dipped below one million.

The number of times people sought emergency help fell by more than half in just two months as COVID-19 gripped the nation.

People have been avoiding hospitals out of fear of adding extra pressure to the NHS or catching the virus while they’re in the hospital, doctors say.

Medics warn the massive change in behaviour is a ‘ticking time bomb’ which may result in more people ending up seriously ill or dying in the near future because they avoided getting medical help when they needed it.

There are also concerns that people with cancer will be delayed casualties of the crisis, with urgent referrals for treatment for the disease down eight per cent on last year. 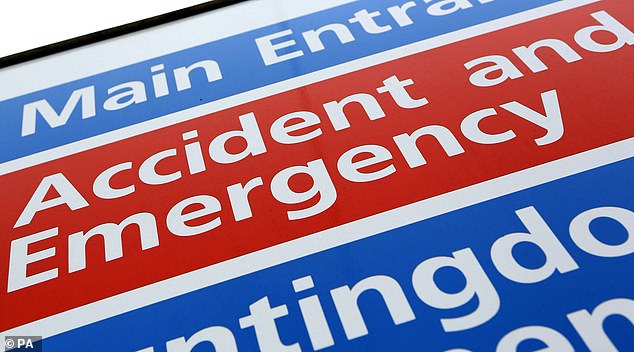 A&E departments are seeing fewer visitors than ever because people are afraid to go to hospitals in the midst of the coronavirus crisis, doctors say

NHS England, which published the figures, said the falls were ‘likely to be a result of the COVID-19 response’ – an indication that people have been staying away from A&E departments because of the coronavirus outbreak.

This is the lowest number reported for any calendar month since current records began.

Dr Nick Scriven, of the Society for Acute Medicine, which represents hospital doctors, said the drop in A&E attendances was ‘a significant concern’ and people’s conditions may have worsened as a result.

‘This is a ticking timebomb in itself and it will be exacerbated by a myriad of other pressures in the coming weeks,’ he said.

‘There will be an ongoing need to keep people with coronavirus separate from others to prevent transmission, with segregated wards effectively reducing immediately available beds, so attempting to manage increased demand will be very challenging.’

Data on all cancer referrals also showed a drop of 8 per cent.

Lynda Thomas, chief executive of Macmillan Cancer Support, said: ‘Cancer must not become the forgotten “C” in this pandemic.

‘Government guidance for urgent cancer services to continue during the virus did not happen uniformly and now it is vital that we see comprehensive plans for how the NHS will catch up.’

Patients are too afraid to visit GP surgeries because they think they will catch the coronavirus or add a burden on the NHS, a doctors’ organisation has revealed.

Dr Robert Morgan, a GP in Bridgend, South Wales, and member of the Royal College of GPs in Wales, voiced his concerns to MPs there yesterday.

‘They are afraid of coming into the general practice, they are certainly afraid of going into hospital.

‘There is another element, particularly in the elderly population who are contacting us, they don’t want to burden us because we are busy as a health service.’

He said drops in medical attendances being noticed across the UK may be a result of people who would have sought help for worsening long-term conditions.

GP surgeries are still working for patients who need them, Dr Morgan stressed.

But he said it would be a good thing if people had avoided going to hospital or doctor’s surgeries for problems they could sort out themselves.

Dr Morgan added: ‘There is a slight positive to all of this that patients might be managing minor illnesses with self-care without resorting to a pharmacy or a GP.

‘Those behaviours might be something that people can take forward.’

There was also a drop of a third – almost 100,000 – in the number of people being admitted to hospital for routine surgery in March.

NHS hospitals were urged to cancel as many operations as they could and to turf out inpatients in a bid to free up capacity in case of a surge in COVID-19 patients.

As a result, many people scheduled to have operations, in some cases life-changing surgery or cancer treatment, were told they would have to wait longer.

Surgeons said the NHS would now struggle to catch up with the backlog of surgeries it has to cope with.

Chief economist at the Nuffield Trust health think-tank, John Appleby, said: ‘Coupled with the fact that GP referrals also fell by 32 per cent from last March will be adding to a growing number of people going without the care they need.

‘The NHS will find it very difficult to catch up.

‘It will take many months and increased use of the [private] sector to meet this unmet need and bring services back to the level we were seeing pre- COVID-19.’

Professor Derek Alderson, president of the Royal College of Surgeons said: ‘At the start of the crisis, postponing surgery was the right thing to do.

‘Now we are past the first wave, it’s important we return to helping all those who have been patiently waiting for essential spine, heart or brain surgery.

‘Many are waiting in pain, their health deteriorating. They deserve to know they will get the help they need, before the year is out.

‘So long as everyone continues to follow social distancing rules, to support the NHS, we can hopefully avoid a second spike and get this essential work done.’

Separate figures from NHS England show the volume of calls to the NHS 111 service in April were up slightly on the same month in 2019, following a big spike in March. 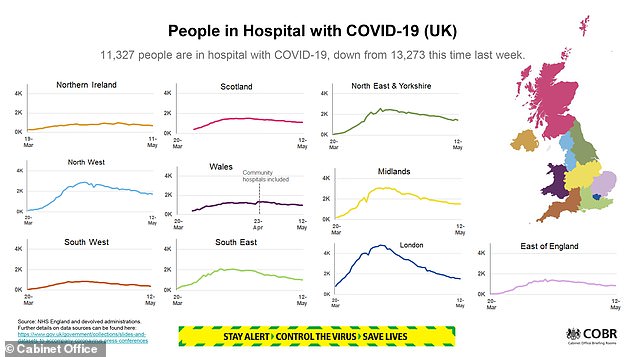 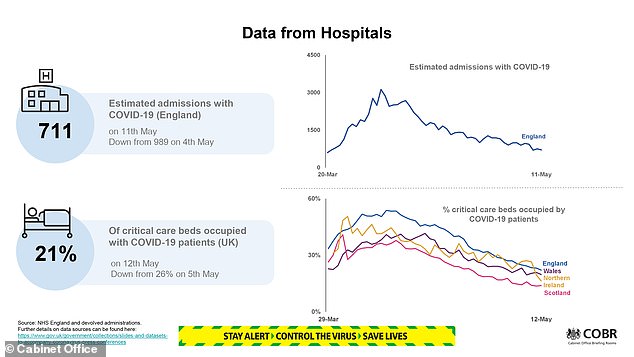 More beds on normal wards and critical care units are now freed up because the peak of the coronavirus outbreak has passed, Government data shows

NUMBER OF CANCER PATIENTS MOVING THROUGH HEALTH SYSTEM IS DOWN

The number of people in England being seen by a specialist for suspected cancer following an urgent referral by their GP dropped to 181,873 in March 2020. This is around 17,000 lower than it was the same time last year.

Under normal circumstances this figure would have been around 208,000 in March 202, which means the number of people being seen by a specialist for suspected cancer following an urgent GP referral is around 26,000 lower than expected .

The target for 93 per cent of people to see a cancer specialist within two weeks of urgent referral was breached in March and has now been breached for 13 months in a row.

Falling A&E admissions are cause for concern because around one in 5 cancer diagnoses happen after someone is admitted to hospital through an emergency department.

But figures so far for May showed a return to call volumes only slightly higher than the demand expected at this time of year, they said.

Although there are concerns about the health of people who needed other types of treatment, the NHS has successfully coped with the first wave of the COVID-19 outbreak.

There were fears that hospitals would face the same fate as some in Italy and become totally overloaded by coronavirus patients, leaving many without the life support they needed or dying in corridors.

However, intensive care capacity has not been met nationwide, health chiefs say, and everybody was able to get the care they needed.

Now the time has come to reset the health service and return to a semblance of normality.

‘It is an amazing achievement that every COVID-19 patient who needed hospital inpatient care or critical care was able to receive it.

‘A&E attendances were sharply down, but the majority of these reductions were for lower-risk conditions.

‘Urgent cancer referrals are now picking back up – having doubled over the past three weeks – and the NHS has launched a public information campaign reminding the people of the importance of seeking care for urgent and emergency conditions.’

Shadow health secretary Jonathan Ashworth said: ‘We support the lockdown to suppress this horrific virus but the far-reaching consequences for wider health outcomes must not be ignored.

‘Resetting the NHS to continue treating COVID and non-COVIDpatients is a huge priority.’ 5 Books About America's Most Memorable Music Venues (Back When Live Shows Were Still a Thing)
We and our partners use cookies on this site to improve our service, perform analytics, personalize advertising, measure advertising performance, and remember website preferences.Ok