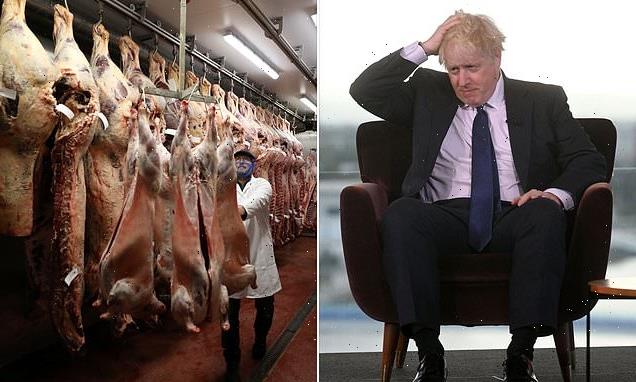 ‘Animals die in the food industry’: Boris Johnson dismisses farmers’ fury at a potential savage cull of 120,000 pigs due to a shortage of abattoir workers that could lead to a Christmas sausage shortage

Boris Johnson risked the fury of farmers today by appearing to downplay the impact of a potential cull of 120,000 healthy pigs that could lead to a shortage of a traditional Christmas dinner staple.

The Prime Minister blithely said the food industry ‘does involve killing a lot of animals’ when asked about the British Meat Processing Association (BMPA) warning that pigs-in-blankets could be scarce because of a lack of trained butchers.

It said a gap in the number of abattoir workers means that farmers believe have to ‘throw pigs in a skip’ because they can’t be professionally butchers and sent to market.

In a bad-tempered, combative interview on the BBC’s Andrew Marr programme this morning, the PM was asked about the concern about the cull, which if it happened would be the largest in British agricultural history.

‘I hate to break it to you Andrew but our food processing industry does involve killing a lot of animals,’ he said.

Mr Marr responded by sayin: ‘Butchering them and then selling them for food, that is not what we are talking about.’

But the PM continued: ‘That is the reality. Your viewers need to understand that, that is just what happens. 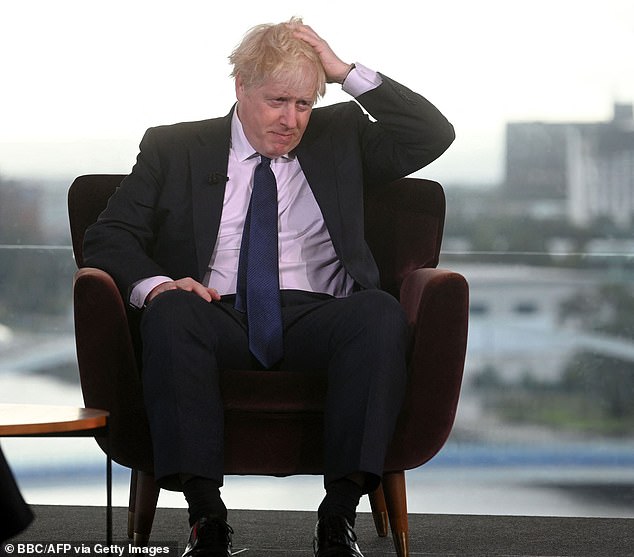 The Prime Minister blithely said the food industry ‘does involve killing a lot of animals’ when asked about the British Meat Processing Association (BMPA) warning that pigs-in-blankets could be scarce because of a lack of trained butchers. 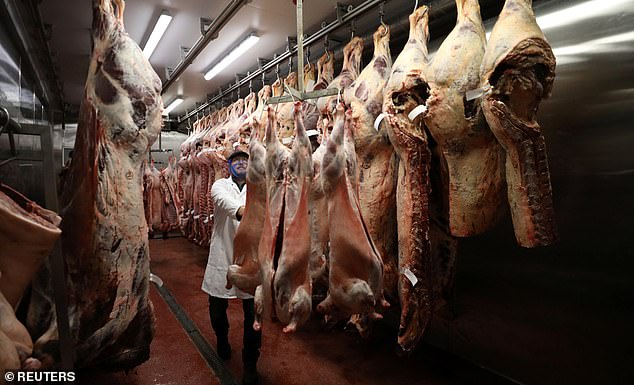 In a bad-tempered, combative interview on the BBC’s Andrew Marr programme this morning, the PM was asked about the concern about the cull, which if it happened would be the largest in British agricultural history.

‘What you’re talking again about is an issue to do with a shortage of another particular type of workforce.

‘Actually, what I think needs to happen is again there is a question about the types of jobs that are being done, the pay that is being offered, the levels of automation, the levels of investment.’

Told again the pigs will be killed and incinerated rather than sold for food, Mr Johnson accused Mr Marr of ‘trying to obfuscate’ the point before the presenter explained food processing to the Prime Minister.

Mr Johnson added: ‘The great hecatomb of pigs that you describe has not yet taken place, let’s see what happens.’

‘The government’s incompetence and chaotic lack of planning is about to lead to the biggest peacetime cull of pigs. Healthy animals will be destroyed because of a shortage of vets, abbatoirs and HGV drivers.

‘This cull is a disaster for pig farmers and risks Britain’s food security. Yet again blame sits firmly with ministers who are out of touch with working people and sat with their heads in the sand.’

Outlining again the desire to boost wages and conditions, Mr Johnson also said: ‘There will be a period of adjustment but that is what I think we need to see.’

The Cabinet is now said to be considering easing visa restrictions for up to 1,000 foreign butchers to avert the crisis – but The Times claims that Priti Patel is against it and concerned they are being pushed by British industry to move back towards pre-Brexit freedom of movement

The British Meat Processors Association said last week that the 1,000 EU butchers is still 14,000 short of the 15,000 the country needs.

This means that businesses are focussing on keeping supermarkets stocked with simple cuts of meat such as bacon, steaks and chops, meaning Christmas favourites such as pigs in blankets and hams could be in short supply.

A BMPA spokesperson said: ‘We really should have been producing Christmas food from about June or July onwards this year and so far we haven’t, so there’ll be shortages of party foods and things like pigs in blankets. Anything that is labour-intensive work could see shortages.’

Mr Johnson also admitted he has known for months that the UK’s haulage industry was in trouble, as he indicated the supply chain problems besetting the economy could continue until Christmas.

On the opening day of the Tory Party Conference in Manchester, the Prime Minister insisted the fuel crisis was ‘abating’ despite continuing reports of long queues for petrol in some parts of the economy.

However, he acknowledged the UK economy was facing ‘stresses and strains’ as it moved away from the ‘broken model’ which, he said, had been rejected by voters in the 2016 Brexit referendum.

But Mr Johnson insisted he would not solve the issues in the labour market – which have led to warnings of shortages on the shelves in the run-up to the festive season – by pulling ‘the big lever marked uncontrolled immigration’ to allow in large numbers of foreign workers.

Asked on Marr about a warning by Chancellor Rishi Sunak that shortages could continue to Christmas, Mr Johnson said: ‘Rishi is invariably right in everything he says.’

He then added hurriedly: ‘It depends how you interpret what he is saying.’

Mr Johnson was also pressed on a warning given by the Road Haulage Association which wrote to him in June saying a major crisis was building in their industry due to the shortage of HGV drivers.

The Prime Minister said: ‘We have known about shortages in road haulage long before then. They have been a chronic feature of the way the road haulage industry has worked.’