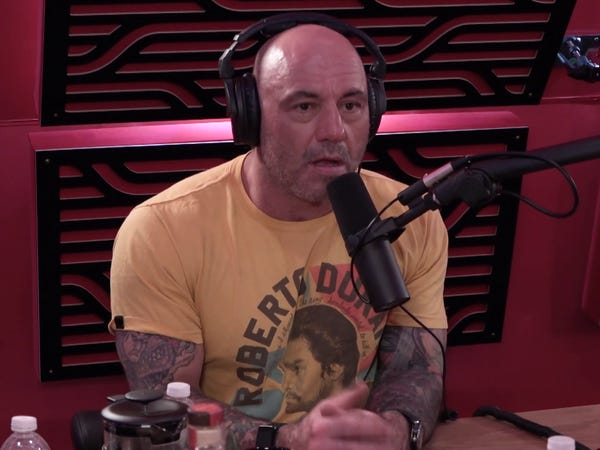 On Tuesday, Joe Rogan interviewed Alex Jones on his show.

The very existence of the episode was immediately controversial. Rogan is the host of "The Joe Rogan Experience," the most popular podcast in the US. Jones runs Infowars and is the most prominent conspiracy theorist in America.

Critics say that Rogan should never have given Jones such a major platform. Jones has promulgated conspiracy theories about the US government orchestrating 9/11, the Sandy Hook shooting being a hoax, and that chemicals put into the water supply turn frogs gay. Spotify, which hosts Rogan's podcast, had kicked Jones off two years ago for repeatedly violating content policies.

After the episode was published, Spotify CEO Daniel Elk defended Rogan, saying the company's policies did not apply to guests.

Rogan and Jones have known each other for a long time. On the show, Jones said he met Rogan in 1998, in a period where Rogan was an actor, comedian, and UFC commentator. And Rogan, himself known for some controversial statements, hosted Jones on his show before, in 2017. Rogan defended hosting Jones by saying that he had gotten things right over the years — like the existence of Bohemian Grove, a semi-secret club where powerful politicians let loose and partake in Satanic-seeming rituals, which has also been covered by legitimate journalists Rogan is welcome to interview.

"We all know that you f— some things up, and your biggest fuck up a Sandy Hook," Rogan said, referring to Jones's now-renounced claim that the massacre of schoolchildren was a hoax. "But you've gotten so many things right. And this is why I keep talking to you about these things and why I defend you."

The sponsors Rogan touted in the episode — Squarespace, the financial services app Cash, the fitness tracker device Whoop, and the bidet company Tushy (it guarantees on its website "100% booty bliss") — did not immediately respond to Insider's request for comment on this story.

During the show, Rogan challenged Jones on several points. He grilled him on several bizarre ideas Jones held on climate change, on the baseless claim that Democratic politicians created lockdowns to damage President Donald Trump electorally, and on an obscure Rockefeller Foundation document from 2010.

"It's Operation Lockstep," Jones said of the Rockefeller foundation document. "And it says a global police state will be brought in from a pandemic and there'll be worldwide martial law. It actually says it in the document."

(It doesn't actually say that.)

On other occasions, Rogan fact-checked Jones and found out he was right, like when Jones claimed that Jared Kushner's dad set up his brother with a prostitute in a sting operation. Turns out that one is true.

But he also let his conspiracy theories wash right past him. At times, he even appeared to agree with some of the nonsense Jones pushed.

In listening to the three-hour-plus interview — which, even if we accept that an Alex Jones interview is a legitimate enterprise, did not need to be nearly as long — it's clear that Rogan and his team allowed Jones to spread misinformation.

It's hard to fact-check Jones. He often claims to be citing an authority, like Bill Gates, Buzz Aldrin, or a report published by the Rockefeller Foundation. On all of those occasions, Jones either distorted or outright lied about what those legitimate authorities said.

He also often weaves his claims into conspiracist frameworks. It took more than an hour for Jones to get to what he said was "the reason I came on here," which was to warn against the perils of transhumanism, which he describes as "these corporations are saying they're going to take us out of our bodies and make us silicon."

Here are 10 major claims from Jones that Rogan didn't challenge. Spotify didn't immediately respond to Insider's request for comment for this story.

"I'd like to finish up my work, clean up mistakes, I made a lot of other stuff because I'm going to die of a heart attack going crazy," Jones said. "I'm totally stressed out, Joe."