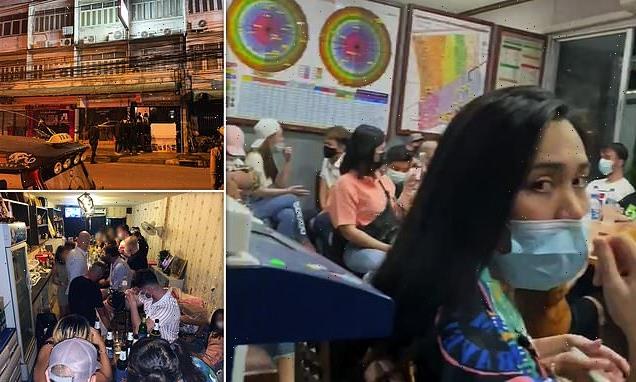 14 Brits are arrested for flouting Covid-19 rules with 2am lock-in at a Thai red district bar: Tourist moans ‘What else are we supposed to do? I don’t want to watch telly’

Thirty-one people, including 14 British tourists, were arrested after flouting Covid-19 rules by attending a lock-in at a red light district bar in Thailand.

The violators were caught drinking alcohol inside the bar on Bangkok’s seedy Sukhumvit Road at around 2am on Saturday, despite a liquor ban being in place as part of emergency Covid measures.

Police arrested 31 people – 14 Brits and 17 Thai women – who were having a drinking party inside the cramped bar while it was supposed to be closed.

One of the customers fumed that they didn’t want to sit in their room watching TV every single night and claimed that some bars remain open on ‘the quiet’ despite strict Covid restrictions.

The person, who did not want to be named, continued: ‘The bars have been closed for the last few months but there are a few that still open on the quiet. 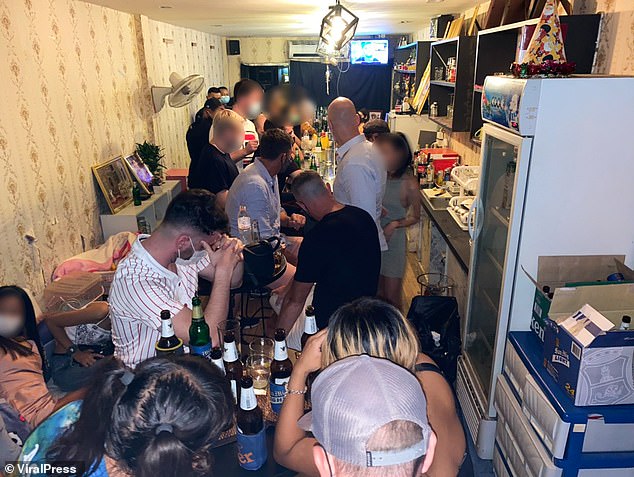 ‘What else are we supposed to do when we want to have a drink? I don’t want to sit in my room watching TV every night.

‘Someone needs to help the economy. I’ll be more careful now because if we step out of line we’ll be doing bird in the Bangkok Hilton.’

The 31 customers were remanded in custody for questioning before appearing in court the next day, where they all pleaded guilty.

Video footage showed them sitting in the police station after being arrested and waiting to appear in court the following day.

The South Bangkok District Court sentenced them to one month’s imprisonment, which was cut to 15 days after all pleaded guilty to violating the Emergency Decree. 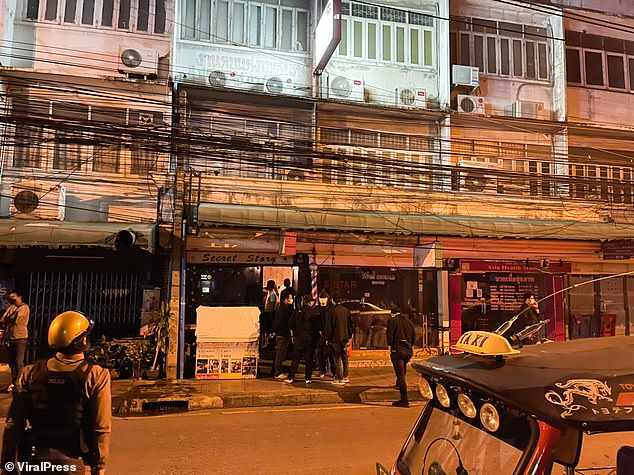 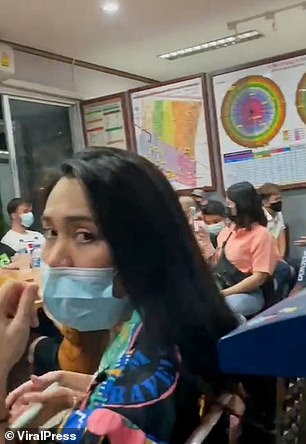 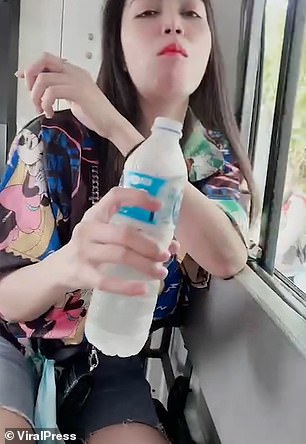 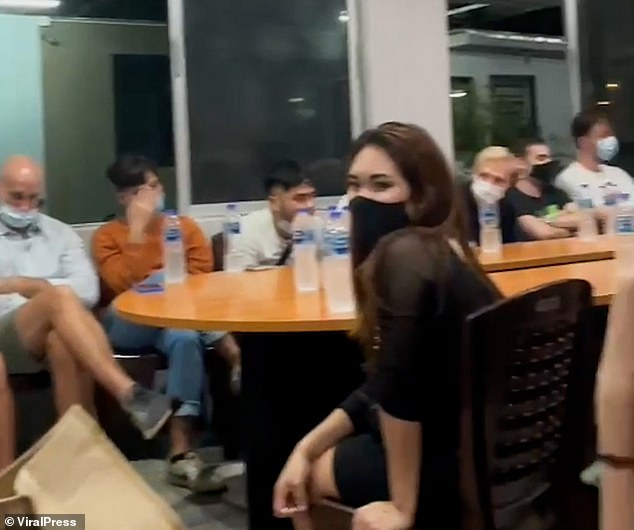 The South Bangkok District Court sentenced them (pictured) to one month’s imprisonment, which was cut to 15 days after all pleaded guilty to violating the Emergency Decree

The bar owner was charged with illegally opening the establishment during lockdown and selling alcoholic drinks during the liquor ban.

Those arrested were required to take a urine test to check for illegal drug intake but they were all found negative aside from having traces of alcohol. Police said that they would raid other bars serving alcohol.

Thailand has been hit hard by Covid-19 restrictions which have seen pubs and bars forced to close and a ban on selling alcohol beverages put in place.

Under the new restrictions, department stores and shopping centres in Bangkok can stay open until 9pm, but restaurants are only allowed to serve food and drink to take away, and seminars, meetings and parties are cancelled.

And last week, Thailand’s capital announced a further ban on indoor dining and gatherings of more than 20 people from Sunday.

The measures will remain in place for 30 days and come after Thailand reported a staggering 3,995 confirmed infections and 42 deaths in the last 24 hours.

The number of Covid infections have doubled recently, with health officials blaming a lack of co-operation from migrant workers employed in construction and in factories.

Apisamai Srirangson, spokeswoman for the Centre for Covid-19 Situation Administration, said on Friday: ‘Camps were closed but workers sneaked out to markets and communities, and spread the disease.’

She added that ‘bubble and seal’ disease control measures had proved successful within 28 days in handling clusters in Samut Sakhon province, south of Bangkok, but not in the capital. 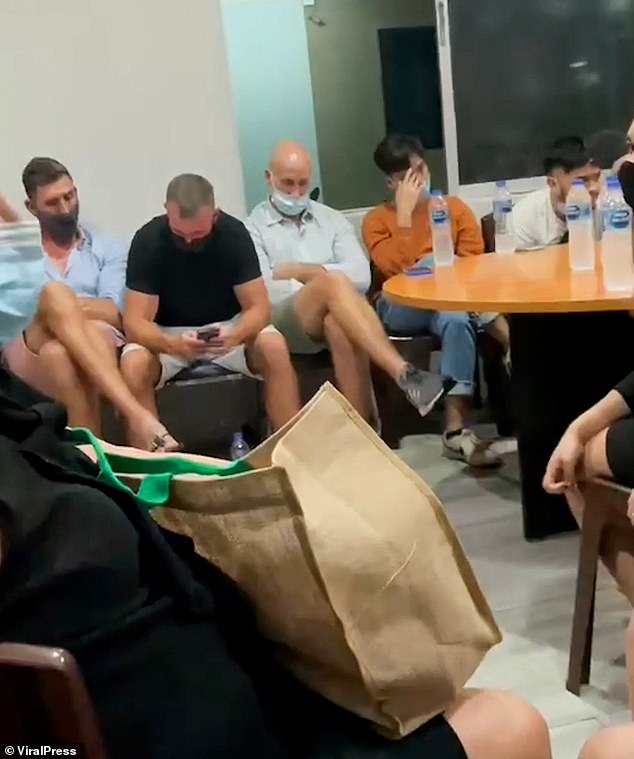 The violators’ sentences were suspended for one year and each person was fined 5,000 baht (£112). Pictured: Video footage showing the individuals after being arrested 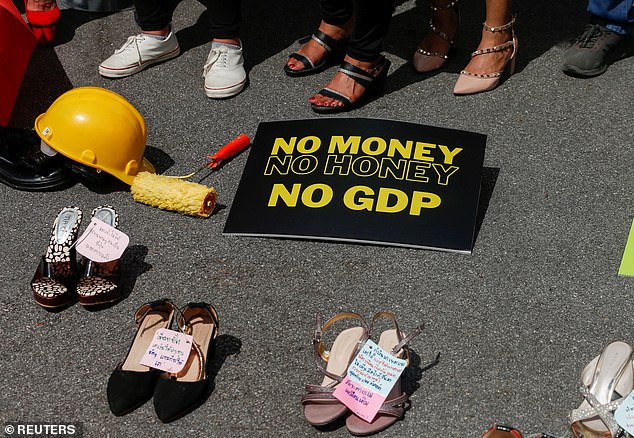 The situation has become critical as the number of hospital beds in Bangkok for seriously ill coronavirus patients is running low, despite the creation of several field hospitals.

Prime Minister Prayuth Chan-ocha said on Friday that a proposal for a seven-day curfew for all of Bangkok has been rejected for the time being.

Meanwhile, authorities, are planning to go ahead with a proposal to allow fully vaccinated foreign tourists to visit the southern resort island of Phuket without undergoing a 14-day quarantine period which is otherwise mandatory.

Thailand is anxious to begin the recovery of its lucrative tourism industry, which has been devastated by the pandemic and consequent travel restrictions.

The Thai Restaurant Association has estimated the industry is losing up to 1.4 billion baht ($44.97 million) per day under the current restrictions.

Around 50,000 restaurants have shut down over the past two months, either temporarily or permanently, the association said. It expects at least 10,000 to go out of business completely by the end of the outbreak.

‘The government told us to stop our businesses, but no help has arrived,’ Taniwan Koonmongkon, the association’s president, said. ‘It has never been this bad. We’re hanging by a thread.’

In late May, the government eased some restrictions on restaurants, allowing them to reopen for dine-ins but at a limited capacity of 25 per cent and only until 9pm.

Industry groups have said that is not enough for many operators who have run out of cash to keep their staff and pay rent in the absence of financial assistance from the government.

The capital and surrounding provinces are the epicentre of the two-month-old outbreak, during which the vast majority of Thailand’s coronavirus cases and deaths have been recorded. 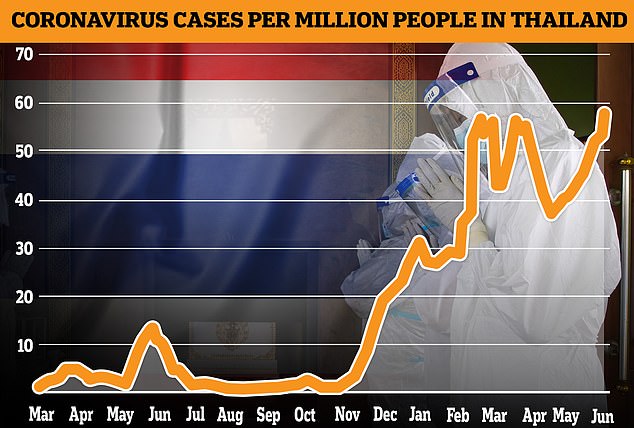 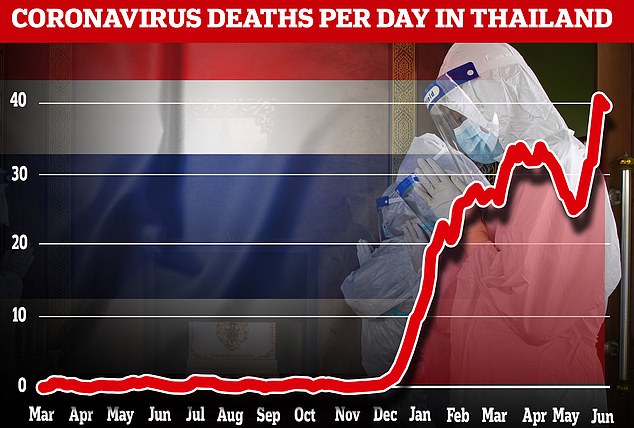 The restaurant association and another industry group, Fire & Ice, have called for urgent financial support and caution on any further restrictions.

‘The food and beverage industry is also one of the main attractions for Thailand’s tourism,’ said Choltanutkun Tun-atiruj of Fire & Ice.

‘What will be left of it once the country reopens, if the government doesn’t see the importance of this industry?’

Ministers hope a vaccine rollout that started this month will allow them to re-open the country to international tourists before the end of the year.

Thailand has administered around 8.66 million vaccine doses, with around 9 per cent of its 69 million people receiving at least one jab.

The prime minister has said Thailand now has agreements that will ensure enough vaccinations for about 70 per cent of the population by the end of the year.