Katie Thurston’s season of The Bachelorette premiered last night—if you missed it, truly WYD!—and people are already rooting HARD for a few contestants. Greg Grippo is already shaping up to be a fan favorite, but Christian is also winning people’s hearts too!

So that being said, we need to invoke the spirit of Sherlock Holmes to dig up all the details on who Christian is—you know, before we all collectively commit ourselves to obsessing over him every Monday night. Join me on this wild journey!

This is Christian, BTW: 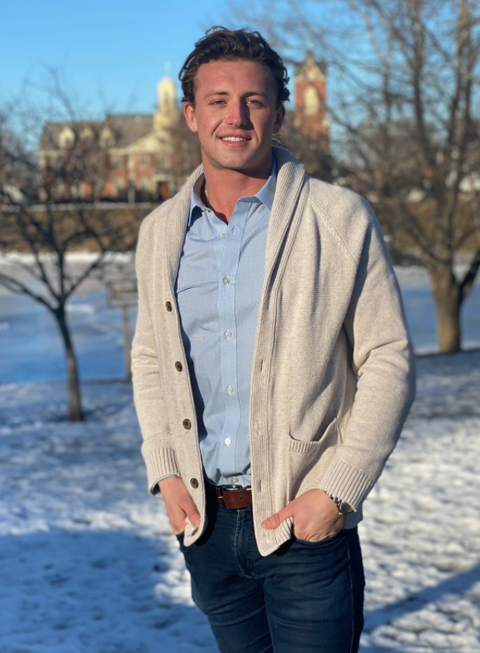 Which explains that very snowy background in the above photo! Christian is based West Newbury, a town in Boston. Despite growing up in Massachusetts, Christian attended Saint Anselm College in the neighboring state of New Hampshire, graduating with a degree in business and commerce in 2018.

Like…really freakin’ good. According to his LinkedIn page, Christian has some serious accolades within his field—he was named a Top 7 Real Estate agent in Greater Boston for the year 2020, Top Producing agent 2019, and also received the 2018 Rookie of the Year Award. He works for Keller Williams brokerage, where he reportedly ranks at number twelve out of 300 agents, and made a whopping $10 million in sales in just 11-months. So yeah, the dude’s talented.

He seriously admires his parents’ relationship.

According to his official Bachelorette bio, “Christian sees the romance in everything. His parents have been married since their early twenties and Christian says he dreams of finding a long-lasting love like theirs. He spends a lot of time with his family and says that he wants the woman that he ends up with to love them just as much as he does because, in all honesty, they are a good time!”

He’s really looking for a woman who can keep her word.

Will Christian end up with Katie? Looks like we’ll have to tune in every Monday night to see!