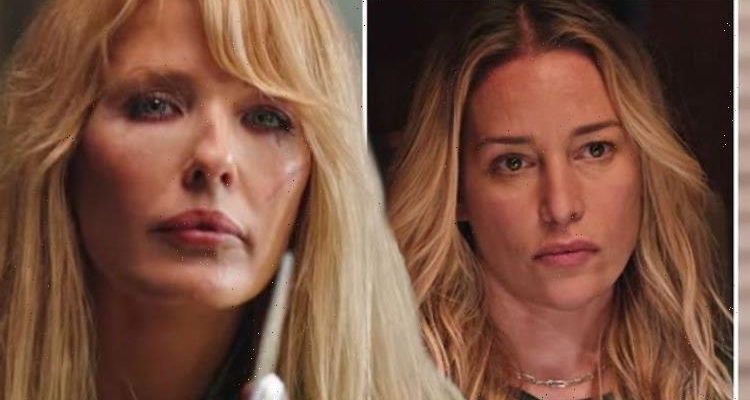 Summer Higgins (played by Piper Perabo) and Beth Dutton (Kelly Reilly) haven’t exactly gotten off to the smoothest of starts following the former’s introduction in season four of the Paramount Network drama. Activist Summer has grown fond of Beth’s father John Dutton (Kevin Costner), with the pair currently in the midst of a romantic fling and it hasn’t gone down well with his daughter. Luckily, the Yellowstone actors behind the characters hold no such resentment when it comes to life away from the camera.

From the get-go, it was clear Beth and Summer weren’t going to get along.

After walking in on an underdressed Summer in the Dutton kitchen, Beth quickly went on the offensive with a fierce introduction: “Who the f**k are you?”

Summer tried to stand her ground but tempers escalated during their first interaction, with Beth even reaching for a kitchen knife to intimidate her father’s new flame.

John eventually tried to defuse the situation, sitting them both down for breakfast but the fiercely loyal and untrusting Beth wasn’t swayed.

Their first meal together ended with Beth wishing “a**e cancer” on Summer and their feud is set to be one of the biggest talking points as season four goes on.

In fact, Perabo told TV Insider: “Summer and Beth’s dynamic is one of the funnest relationships I have this season. Summer and Beth hate each other. And it just goes from bad to worse.”

She even teased: “It may have been a big mistake for her to ever come to Montana.”

With such a gripping storyline between the two along with John, it’s no surprise Perabo took to Instagram to share a snap from behind the scenes of her time filming.

Snapping a picture of the show’s camera capturing Summer and John taking a stroll, Perabo captioned on Sunday: “I appreciate a man who can mend what’s broken. #yellowstonetv TONIGHT.”

It didn’t take long for fans to weigh in with their excited messages and among them was none other than Beth star Reilly.

Paying tribute to her on-screen enemy, Reilly commented in response: “You are so brilliant.

“And I love working with you Piper ! Xxxx,” Reilly penned.

The adorable message didn’t go unnoticed by the Yellowstone newcomer, who reciprocated her co-star’s kind words.

So while the pair may be at loggerheads on-screen, the actors have proved their bond couldn’t be further from their personas.

And it didn’t take long for Yellowstone fans and Perabo’s followers to comment on the interaction – ecstatic two of the show’s biggest stars had such a sweet friendship amid all the anger on-camera.

“You two are great!!” @jlr43 replied while @heather_wince commented: “Just watched the scene where you two meet. Perfection.”

And @farnanindc agreed: “Love you & piper both. Thank you for being the strong female leads that often go without praise. Today, we praise you!!!!! [fire emoji].”

However, in Yellowstone, the future of John and Summer’s romance could face its biggest hurdle in Beth.

Beth has challenges of her own, however, after becoming an integral part of Market Equities’ staff – but how will their storylines unfold?

Yellowstone season 4 airs Sundays on The Paramount Network in the USA. A UK release date is yet to be announced.