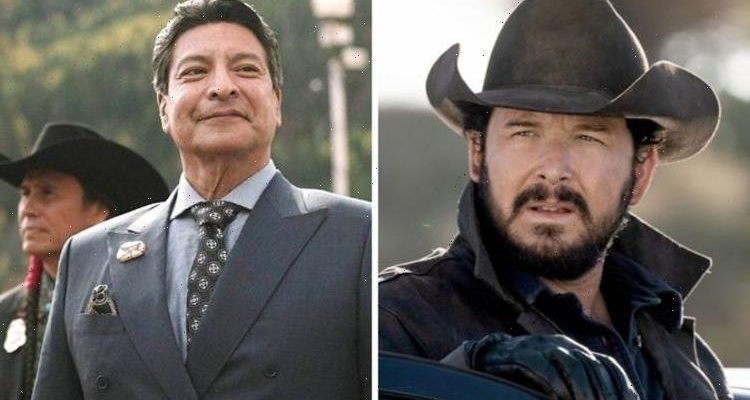 Season four of Paramount’s hit Western drama is expected to reveal the answers to some huge questions still hanging over the series after last year’s shocking finale. With John Dutton (played by Kevin Costner) left bleeding by the side of the road, Yellowstone fans are predicting a brutal revenge plot once Rip Wheeler (Cole Hauser) exposes the culprit.

Jamie discovered he wasn’t actually related to his family by blood in the last season, a secret that has been kept from him all his life.

He subsequently met up with his biological father, Garrett Randall (Will Patton), whom fans believe told Jamie to kill Dutton with an ambiguous coded message.

When all is finally revealed at the start of season four, Jamie could find himself at the top of Rip’s hit list if he was involved in the horrific series of attacks against the Duttons.

The fate of his siblings, including Rip’s fiancée Beth (Kelly Reilly), are still unknown, but the hot-tempered ranch manager will surely be out for blood if anything happens to his future wife.

Fans of the show have been wildly speculating what’s to come in Yellowstone season four, including one Redditor who laid out his vision for the entire next instalment of the show.

They posted: “I think Jaime is behind the attacks.

“His biological father talked about the family’s gift to kill and how you kill the king to own the ranch.”

Randall urged Jamie to “kill the king” to gain the power he so desperately wanted, which fans believe can only be a reference to landowner John Dutton.

Dutton still has enemies everywhere, including property company Market Equities who want to take his land for themselves to develop it into a new estate.

Even so, Dutton’s biggest threat could come from within his own family after neglecting and failing to appreciate Jamie for his entire life.

The trailers for Yellowstone’s fourth season have already teased a violent trail of revenge after Dutton’s attempted murder, headed up by his right-hand man Rip.

Despite knowing him for most of his life, Rip won’t hesitate to kill Jamie on the spot if he finds out he had something to do with the bomb that was sent to Beth’s office.

The fan continued the theory, and predicted: “Rip will kill Jaime for what he did.”

They also claimed: “He will team up with Mo to bring the rest responsible to a noose.”

This theory also proposed an unlikely alliance between Rip and another of Dutton’s fiercest rivals; Thomas Rainwater (Gil Birmingham) and the Broken Rock Tribe.

While Rainwater himself may not be so willing to put his life on the line for Dutton, his associates, including bodyguard Mo (Mo Brings Plenty) could help bring his attacker to justice.

Jamie may have had help in organising the ambush and covering his tracks, potentially from the Yellowstone’s enemies at Market Equities.

Still, Rip has proven time and again he won’t stop until he gets his man, and with Beth’s life on the line, Jamie may become his first target when he starts looking for answers.