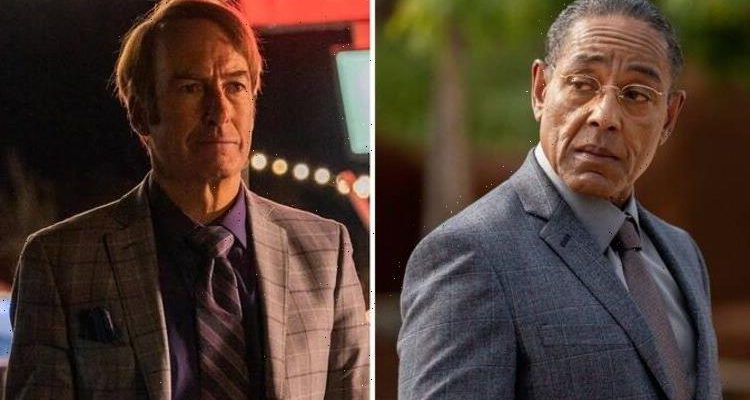 Better Call Saul was renewed for season six in 2020 but with the entertainment industry put on pause during the pandemic, the crime drama’s return was also delayed. Two years on and it’s time for the return of Saul Goodman (played by Bob Odenkirk) for one last series on AMC and Netflix. As fans prepare to say goodbye to the Breaking Bad prequel, they are also keen to know the reason behind the show coming to a close.

Why is Better Call Saul ending after season 6?

Better Call Saul has been airing since 2015 but it’s now almost time to bid farewell to the beloved drama.

Coming from the Breaking Bad universe, Better Call Saul is a prequel, telling the tale of what happened prior to Walter White (Bryan Cranston) and Jesse Pinkman (Aaron Paul) showing up at the former con artist’s door.

When it was given the green light for another series two years ago, it was made clear that the show wasn’t being cancelled by AMC.

It appears that the reason for the show ending is mainly down to the story itself catching up with the events that took place in the original drama.

As Better Call Saul is a prequel, there is only so many seasons it could have before it would start to overlap with Breaking Bad.

Season six will start to see what happened just before Saul met Walter and Jesse for the first time.

This is backed up by co-creators Vince Gilligan and Peter Gould’s comments at a Better Call Saul TCA panel in 2020.

Gould said that it was his “dream…to tell the complete story of our complicated and compromised hero, Jimmy McGill – now AMC and Sony are making that dream come true”.

This indicates that it had always been Gilligan and Gould’s plan to finish the series with six seasons.

Thankfully, this wish was granted by the networks which means they can round off the story as they originally wanted.

To slowly integrate the Better Call Saul and Breaking Bad timelines, a couple of special guests will be showing up in season six.

It was confirmed earlier this month that both Cranston and Paul would be reprising their iconic roles of Walter and Jesse in the final season.

Gilligan hinted at the prospect during the show’s season six premiere with Gould officially announcing the good news at PaleyFest.

Gould told The Hollywood Reporter: “I think it would be odd if Walt and Jesse didn’t make an appearance. So I’m excited that we did and how we did.”

Exactly when the pair are going to show up in the drama hasn’t yet been revealed.

But there will be plenty of time for them to as this sixth outing will be the longest yet.

Typically, Better Call Saul series are made up of 10 episodes each.

This won’t be the case for the last season, however, as it will consist of 13 episodes.

It will be divided into two parts with the grand finale coming out on Monday, August 15, in America, and the following day in the UK.

Better Call Saul season six premieres on Monday, April 18, on AMC in America and Tuesday, April 19, on Netflix in the UK.