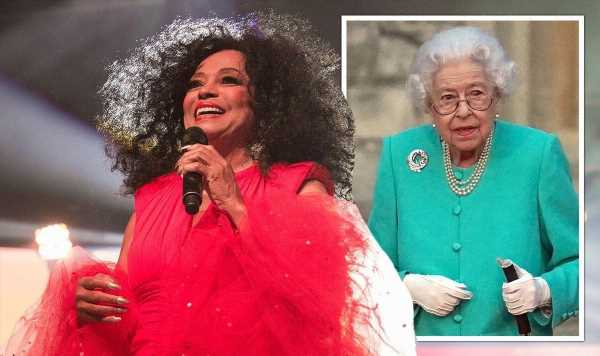 The Platinum Party at the Palace will be airing on BBC One on Saturday, June 4. The star-studded concert follows the parade through London and the Service of Thanksgiving to mark the Queen’s 70 years of service. The upcoming live Platinum Jubilee concert outside Buckingham Palace includes a whole host of huge names.

Who is performing at Platinum Party at the Palace?

Fans can tune into the Platinum Party concert from 7.30pm, for three hours of entertainment.

Ten thousand free tickets were made available in February, with a ballot opened to the public.

The concert will be opened by Queen + Adam Lambert, with Diana Ross as the headline act.

Stars from the world of sport and showbiz will be in attendance, including Sir David Attenborough, David Beckham, Stephen Fry and Dame Julie Andrews.

The night will include some special appearances from celebrities, with the full line-up as follows:

Sir Elton John has also recorded a special performance for the night.

Legendary composer Andrew Lloyd Webber will also be taking to the stage along with actor Lin-Manuel Miranda.

There will be performances by the cast of fan-favourite musicals such as Phantom of the Opera, Hamilton, Six, The Lion King and Joseph and the Amazing Technicolour Dreamcoat.

Music legend Diana Ross said she was excited to sing for the Queen this weekend.

She said on Twitter: “I’m coming to you, London! I am so excited to perform for Her Majesty The Queen once more.

“What an honour it is to be a part of celebrating her historic reign.”

Last month, she penned: “I am looking forward to Summer and seeing all of you in the UK and Europe.

“I have missed you so. I can’t wait for us to create more memories together.”

Queen star Brian May played at the Queen’s Golden Jubilee 20 years ago.

He said he was happy to be invited back for a spectacular show.

“Then there was a moment when I wondered … after Buckingham Palace roof, where can you go? Well … you will see!”

Sir Rod Stewart said he has grown up with the Queen and he told BBC Breakfast’s Naga Munchetty: “She has been so much a part of my life, she’s almost like a sister. She has always been in the background.”

He also expressed how much he “adored” Prince Charles.

The Platinum Party at the Palace airs at 7.30pm on Saturday, June 4 on BBC One.