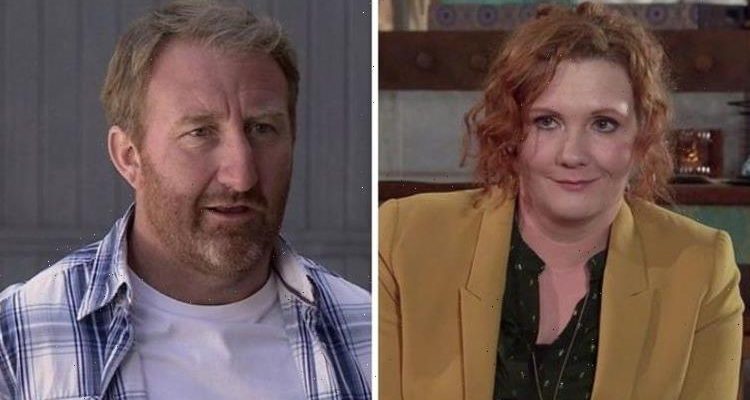 Coronation Street has introduced fans to a new flame for Fiz Stape (played by Jennie McAlpine). After looking for love on a dating app, Fiz finally met someone new. But who is Fiz’s new love interest?

Who is Fiz Stape’s new love interest in Coronation Street?

Fiz has had a hard time lately in Coronation Street, but things are finally looking up after meeting a new love interest.

Tyrone left her to be with Alina Pop (Ruxandra Porojnicu), and together they are expecting a baby.

Despite everything, Fiz and Tyrone have ended up on good terms occasionally; when Fiz helped him following the shocking death of his ex Kirsty (Natalie Gumede), and working out the arrangements when it came to looking after their two children.

Realising Tyrone is not coming back, Fiz has decided to move on with her own life.

She finally got the boost she needed when Beth Tinker (Lisa George) and Sean Tully (Anthony Cotton) encouraged her to sign up for a dating app, leading her to a new encounter.

She met Phill at a local restaurant and the two quickly hit it off with a second date on the cards.

Phill is played by Jamie Kenna, 43, who has starred in a number of high-profile British projects.

Recently the star could be seen in Not Going Out, Black River Meadow and Peaky Blinders as Billy Mills.

The actor has even appeared in several films, from Stormbreaker to The Bank Job and even the Oscar-nominated Children of Men.

Fans may also recognise him from rival soap EastEnders, where he played Vince Franks.

The star has been sharing updates about his inclusion in the series on his Instagram, teasing fans about the new Fiz romance.

In one post, the star shared an image of What’s On TV magazine showing himself with Tyrone looking jealous behind him.

Kenna captioned the post: “And so it starts. @muckleston how much does make you laugh?”

Fans rushed the to comments to share their thoughts on the building tension between the pair.

One fan said: “Haha! Brilliant look at you muscling in on Tyrone’s ex…heartbreaker.”

Another fan added: “And so it begins!!!”

“Flipping love this! Cos I’m very old I have watched this on and off for over 50 years,” shared a third fan.

Fans will have to wait and see how Phill’s inclusion in the show will change things for Fiz and Tyrone, with drama bound to be just around the corner.

Coronation Street is available to watch on ITV.