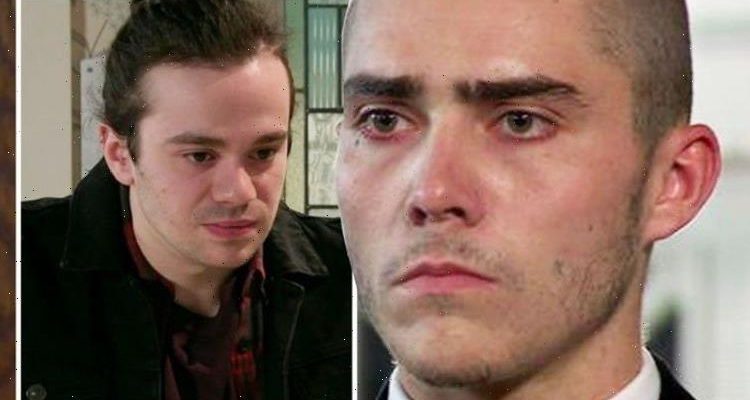 Corey (played by Maximus Evans) has been playing the victim in recent scenes on Coronation Street as a jury sat to hear the evidence put against him as to why he could have killed Seb (Harry Visinoni). As the court case has played out, viewers of the ITV soap have been taken back in time to the night of the hate crime attack and have discovered it was Corey who murdered the youngster. He is currently pinning the blame on Kelly Neelan (Millie Gibson) but with villains usually getting their comeuppance soon rather than later, when will he be found guilty?

Corey has never liked Seb’s girlfriend, Nina Lucas (Mollie Gallagher), as she previously had a relationship with one of his love interests, Asha Alahan (Tanisha Gorey).

This started a rivalry between the pair and when Nina began to advise the likes of Kelly to stop hanging around with Corey, he turned on her.

Chasing Seb and Nina, Corey and his friends viciously attacked the lovers and taunted Nina for the way she looked.

As his fellow gang members set about hurting Nina, Corey lashed out at Seb, kicking him to the floor and gave a deadly blow to the head.

Kelly tried her best to stop the violence but Corey’s stature meant she was unable to take him down unassisted.

When they both saw Seb was lying lifeless on the floor, they panicked and ran away, leaving the youngster to fend for himself.

Seeing his girlfriend was unconscious, he crawled along the street to be with her before ringing an ambulance.

This was the last time Seb was conscious as the impact of Corey kicking his head repeatedly was too severe.

Once his mother, Abi Franklin (Sally Carman) arrived at the hospital, she was told her son had died from his injuries.

Ever since she and Nina have been trying to get justice for their loved one’s death and it seems they will get their answers this week.

When will Corey Brent be found guilty of killing Seb Franklin?

In Monday night’s double bill of the weeknight serial drama, viewers will watch as the court case comes to a conclusion.

Imran Habeeb (Charlie De Melo), who has been defending Kelly, will have one last chance to try and paint his client in the best possible way.

His ex-wife, Sabeen Habeeb (Zora Bishop) is acting on behalf of Corey and she too will use every weapon in her arsenal to convince the jury he should walk free.

By Friday’s episode, all will be revealed to viewers on who the jury think should be sent to prison for Seb’s death.

In fact, it will all unravel in the first episode of the night as a synopsis for the upcoming scenes has teased what’s to come.

It reads: “Abi seeks proof of Stefan’s [Corey’s father played by Paul Opacic] corruption, and Kevin wishes she would just leave it to Imran, while the legal eagle prays for a positive outcome for Kelly. Eventually, the jury returns from its deliberations.”

For part two, the synopsis reads: “News of the verdict sends shockwaves through Weatherfield as those affected by Seb’s murder come to terms with the jury’s response, and there is shocking news from the prison.”

Although it’s not been confirmed officially, it is likely this will be the moment Corey is found guilty of Seb’s murder.

After months of walking around acting as though he is innocent, the real killer should be put behind bars for the foreseeable future.

How does the actor who plays Corey Brent feel about playing Seb Franklin’s killer?

Soap star Maximus has detailed how he feels playing a young villain on the cobbles and the responsibility which comes with the role.

Discussing the latest scenes in court, he said: “Corey definitely thinks he’s got the upper hand in comparison to Kelly, which comes down to his more privileged background I think and the preparations his dad has put in place with his legal team.

“But at the same time, he’s still a young lad, on trial for a very serious crime so like anybody would be he’s very nervous.”

Explaining the conclusion he would like to see, Maximus added: “The end always comes for the bad ones, especially on Coronation Street.

“I’m anticipating that his end will come soon but I’d also be happy if it didn’t.”

Maximus continued: “A guilty party not being found guilty can put everyone on edge and leave people to take matters into their own hands. So I’m excited to see the outcome.”

On the reaction he has received from the public, the soap star added: “The majority of people manage to separate me the actor from Corey quite well.

“On the street everyone is really nice, I’m happy to take pictures with people because the show is such a great accomplishment for Manchester and has such a huge following I’m happy every time people come up to me because it means the show is still going as strong as it was all those years ago.

“If there ever is a bad comment I never take it to heart because I realise that Corey is a villain and it must mean I’m doing an alright job.”

Coronation Street airs Mondays, Wednesdays and Fridays at 7:30pm and 8:30pm on ITV.