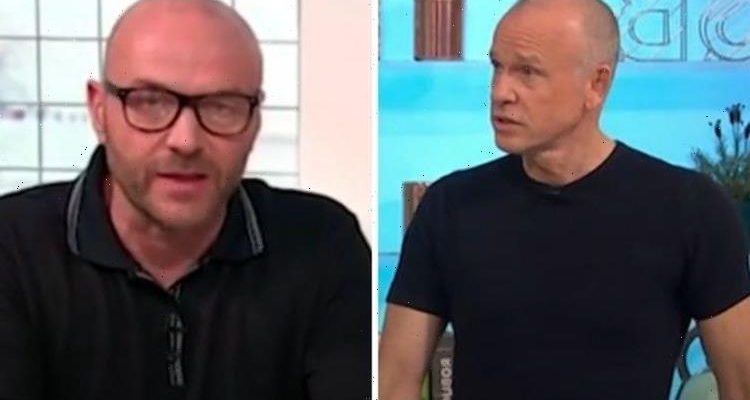 Tim didn’t explain why Simon wasn’t on Sunday Brunch this week, simply saying he was “off”. TV presenter and radio personality Miquita stepped in to host the Channel 4 show alongside Tim, but admitted she hadn’t “done her homework” on the programme. The duo have fronted the show since 2012, and it has become a daytime weekend favourite with viewers.Fans of the show were quick to comment about Simon’s absence, commenting that the show isn’t the same without him and attempting to find out why he wasn’t presenting as usual.

Opening the show, Tim told viewers: “No Simon this week! He’s off.”

But he didn’t seem too concerned about his co-star, adding: “He’s probably got a hangover, good morning Simon if you’re watching.

“My co-presenter this week is Miquita Oliver.” The 37-year-old waved at viewers and said hello.

“Welcome to the show, how are you?” Tim, 53, asked. Miquita replied: “I’m really good, it’s really lovely to be here actually.”

“Are you looking forward to doing the show?” the former Soccer AM star asked.

“Yeah, let’s totally do this!” she responded enthusiastically. But it seems she hadn’t done much research on the show.

“Have you done your homework, do you know all about it?” Tim probed.

It seemed Miquita wasn’t joking, as she was stunned that the show’s credits had its own theme song.

“Wow, I didn’t know you guys had a tune!” she remarked.

Viewers of the programme took to social media to investigate Simon’s whereabouts.

A second commented: “Not the same without Simon. #SundayBrunch.”

Someone else posted a meme saying “I miss you,” with the caption: “#sundaybrunch without simon.”

A fifth chimed: “Where’s Simon I didn’t hear anyone say where he was #SUNDAYBRUNCH.”

The account posted a photo of Tim and Miquita and wrote: “Our lovely hosts today! @miquitaoliver & @timlovejoy. @simonrim we all miss you #SundayBrunch.”

Sunday Brunch airs weekly at 9.30am on Channel 4.