Before the latest royal baby was born, a British tabloid speculated that the Duke and Duchess of Sussex would choose to name their first child something "UNUSUAL" that "UNIFIES the US and UK," presumably as a nod to their respective heritages. The Twitter jokes rolled in – "I can't believe they're naming their kid Paddington 2," one film critic tweeted – until Wednesday morning, when Prince Harry and Meghan's announcement confirmed that the name was, in fact, somewhat unusual. 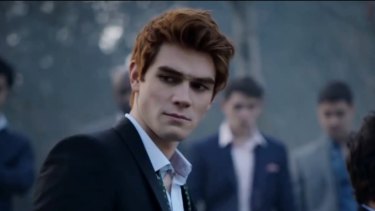 K.J. Apa as Archie in Riverdale.

Baby boy Sussex is now known as Archie Harrison Mountbatten-Windsor, a mouthful of a moniker short for absolutely nothing. Archie isn't a nickname for Archibald or even Arthur, both of which would have been more predictable choices for a royal (and the latter of which was a favourite among bookies). It is reported to be the nickname of Prince William and the Duchess of Cambridge's oldest son, if we are to believe what Prince George once told a random dog walker, which is bound to create some confusion and/or tension in the family.

So, assuming Harry and Meghan didn't just swipe their nephew's pet name, where does the name Archie come from? It doesn't seem to be pulled from Harry's Mountbatten-Windsor lineage, nor from Meghan's immediate family, so allow us to humbly suggest another option: Archie Andrews – who, along with Harry, is one of the most famous redheads, fictional or otherwise, to ever exist.

He's the main character of the Archie Comics, created by publisher John L. Goldwater and artist Bob Montana in the 1940s. The comic books centre on high schoolers in the fictional town of Riverdale, where Archie's misadventures include best pal Jughead Jones and love interests Betty Cooper and Veronica Lodge. The stories take place in an idyllic American setting, but their popularity spread worldwide.

The official Archie Comics account acknowledged its royal namesake on Wednesday by tweeting "i'm baby," arguably the best use of the meaningless meme yet. 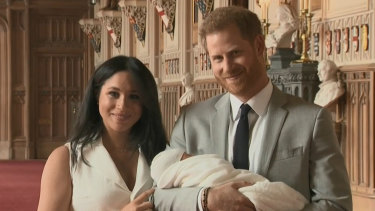 If you are at all acquainted with the youths of today, you've probably noticed an uptick in chitchat about Archie and his friends over the past couple years. That's thanks to Roberto Aguirre-Sacasa, chief creative officer at Archie Comics and showrunner of the CW's Riverdale, a television adaptation of the comics whose first season earned comparisons to Twin Peaks because of its murder mystery plot and overall aesthetic. The show premiered in early 2017, the same year Archie leapfrogged 174 places to become the 18th most popular name for English and Welsh baby boys.

Coincidence? We think not!

But what about the other famous Archies, you ask? It's unlikely the Sussexes would want to honor the bigoted Archie Bunker of All in the Family, no matter how much he evolved. And given Meghan's status as the most notable part of USA's Suits, we're leaning more pop culture than sports.

Archie Andrews is defined by his red hair. This is so integral to the character that KJ Apa, who plays him in Riverdale, is forced to dye his naturally dark hair a ridiculous shade of orange that has gotten incrementally better as the seasons go by.

Plus, Archie's handsome! If you're going to continue bunking tradition with your kid, he might as well share a name with a character played by the guy who reportedly danced shirtless to DJ Khaled's All I Do Is Win at a White House correspondents' dinner party. Commit to the shtick, is what we're saying.

In Riverdale, Veronica (Camila Mendes) often refers to her beloved Archie as Archiekins, meaning Harry and Meghan's kid has a built-in nickname longer than his actual name – wonderfully nonsensical, as royal things often are. Perhaps the Sussexes wanted to honour Archiekins' impressive trajectory from a kid torn between pursuing business school or a music career to a kid who, along with his friends, is tasked with saving their classmates from the clutches of a dangerous, often lethal board game called Gryphons and Gargoyles. It's tough being the teenagers who are better at protecting their town's citizens than actual law enforcement. Their strength is admirable.