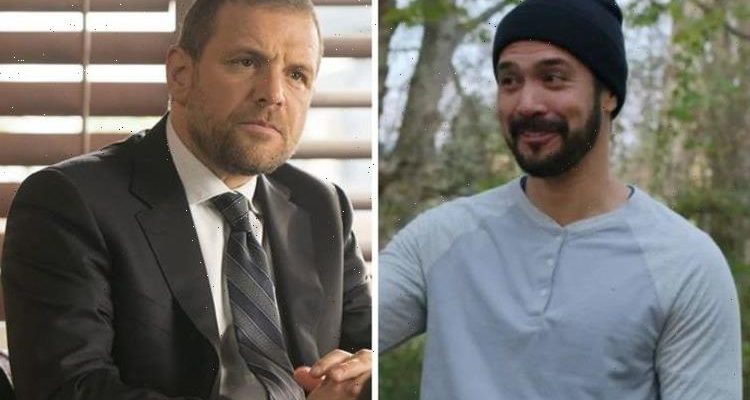 Virgin River is currently in development for its fourth season on Netflix. As such, fans are trying to piece together what could happen in the new season, or what could be revealed. One potentially major reveal concerns Calvin (played by David Cubitt) and Mike (Marco Grazzini) and their supposed connection.

Back in season two of Virgin River, Brady (Ben Hollingsworth) made some major moves, working his way up in Calvin’s gang.

Calvin told him he needed to kill Spencer (Chad Rook) to win over his trust and claim a true place in the group.

During the season two finale, Brady confronted Spencer, but he made the decision not to kill him.

Instead, he drove him and his family to the bus station, saving his life as they left town for good.

The tension between Calvin and Brady was palpable throughout season three until it became clear the gang leader had found out about Spencer’s true fate.

It is never revealed how Calvin gets his information, leaving some fans to wonder if he has a connection to Mike.

Mike is the detective currently working to discover the overarching plot of who shot Jack (Martin Henderson).

On Reddit, users discussed the potential of Calvin and Mike working together and the ramifications it would have on the show as a whole.

User Babe_the_BlueOx wrote: “It seems to me that Calvin only figured out that Spencer was turning on him after Jack told Mike about it.”

User Whatever262122 replied: “There seems to be a dodgy connection between Calvin and the police, the gun planted in Brady’s car and Calvin being tipped off about the raid being other examples.

“I’m not entirely convinced Mike is the culprit yet, but he could be or someone working with him.” (sic)

If Mike is secretly feeding Calvin information, it would throw the entire Jack case into doubt and potentially suggest deeper corruption running through the town.

Stayready10 added: “Mike knows more than he’s saying. I think he is indirectly connected to Calvin. Someone he’s reporting info to is on Calvin’s payroll.”

All the users seemed to agree there is more going on with Mike than meets the eyes, as the character has always had a standoffish personality.

However, another user pointed out that as the show is based on the Robyn Carr novel series, it is unlikely there will be any major changes surrounding Mike in the show.

“Since mike isn’t sketchy in the books I doubt they’re going to make him sketchy on the show – but someone could be using/following him because they know he’s close to Jack,” Sharipep wrote.

How all this will play out remains to be seen, as season four of the series is still in early development.

Netflix has not revealed any specific plot details for the fourth season and the show has never been a direct adaptation of the novels.

Over the course of the first three seasons, there has been a number of major changes from the source material, making it harder to guess what could happen.

Either way, it seems clear Mike in the show will have more to reveal in season four, or season five, which Netflix has also confirmed.

Virgin River seasons 1-3 are available to watch exclusively on Netflix.