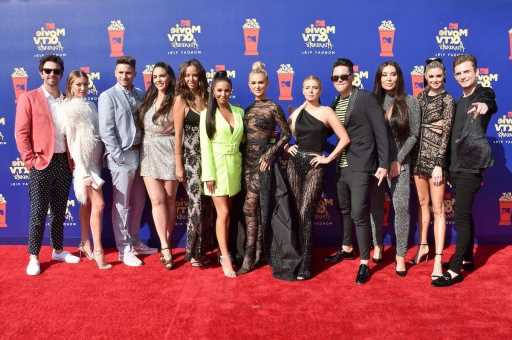 Vanderpump Rules Season 9 is finally starting production. The show, which didn’t resume its normal filming schedule in summer 2020 due to the coronavirus pandemic, will soon get back to its rowdy antics and drama for Bravo. The show has dropped several key players that fans have watched for years and some newbies. Here are all the details about the Vanderpump Rules season, who’s returning, and who isn’t.

The show is beginning production next month, a spokesperson from Bravo told Variety. The outlet revealed that it has been 18 months since the cast and crew last gathered to film. The show’s extended break was due to safety risks from the coronavirus pandemic. Many of the show’s scenes take place in restaurants and bars in West Hollywood, California.

Following the announcement, Bravo shared more information about the next season of Lisa Vanderpump’s deliciously drama-filled show. The network said that safety protocols and a specific COVID-19 plan will be in place to keep all of VPR healthy during production.

“The plan was developed in accordance with CDC guidance, all state and local orders, as well as NBCUniversal’s own safety guidelines,” Bravo stated. “The health and safety of the cast and crew is the priority of Bravo for all of its shows.

Here’s who is coming back on the show to film in season 9.

Vanderpump, Schwartz, Sandoval, Maloney-Schwartz, and Shay have been on Vanderpump Rules since season 1. Shay even appeared on The Real Housewives of Beverly Hills with Vanderpump prior to VPR.

Maddix, Kent, and Kennedy were later additions. And Leviss, who initially appeared on Vanderpump Rules just as Kennedy’s girlfriend, has become a cast member on VPR in her own right.

There are definitely notable names missing from the “returning” list.

Who isn’t returning to ‘Vanderpump Rules’ this next season

The show famously parted ways with Stassi Schroeder and Kristen Doute after season 8. They were let go after Faith Stowers publicly discussed the pair allegedly calling the police on her for something she didn’t do, per the BBC. Both Schroeder and Doute began VPR in season 1, with the best friends providing much of the storylines’ drama.

Later on, Vanderpump Rules also announced that it wouldn’t be bringing back notorious show villain Jax Taylor and his wife Brittany Cartwright in season 9. Taylor and Cartwright’s wedding was the focus for a lot of season 8, to some viewers’ dismay.

Dayna Kathan has also announced that she will not be coming back to Vanderpump Rules. Charli Burnett, who joined the cast in season 8, hasn’t yet been confirmed to return next season.