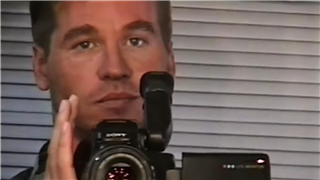 Val Kilmer has lived his life onscreen, whether in blockbuster films, or thousands of hours of home video shot by the actor himself on a handheld camera. Now, the 61-year-old star is showing fans some of what he’s shot through the years, and taking a look back at his life and career in a new documentary, simply titled, Val.

“I’ve lived a magical life, and I have captured quite a bit of it,” Kilmer reflects in the trailer, noting that he was the first person he knew to own a personal video camera. The footage is evidence of that fact, with clips of the actor at all ages, from at-home productions of western and sci-fi films, to personal video shot on set of some of his biggest films, like Top Gun, The Doors, Heat and more.

“I have behaved poorly. I have behaved bravely, bizarrely, to some,” he says in voice over. “I spent decades finding my voice through characters, through movies.”

That voice, however, is different now. After a years-long battle with throat cancer, Kilmer underwent a tracheotomy and now speaks through his tracheostomy tube.

“I’m still recovering, and it is difficult to talk and to be understood,” he shares. “But I want to tell my story more than ever.”

Watch the full trailer for Val below:

In an exclusive interview with ET last year, Kilmer opened up about continuing to work, and remaining optimistic, amid his health battle — even reprising his iconic role of “Iceman” opposite Tom Cruise in Top Gun: Maverick, which is due out Nov. 19.

“I’m doing terrific. I sound like I’ve been run over by a cement mixer, [but] I feel fabulous,” he shared. “Some days are better than others, but I am very much improving, so, yeah, I’m going to work till I’m 150 years. I wanna play the oldest man on Earth.”

Hear more in the video below. Val is available in theaters on July 23, and on Amazon Prime Video on Aug. 6.