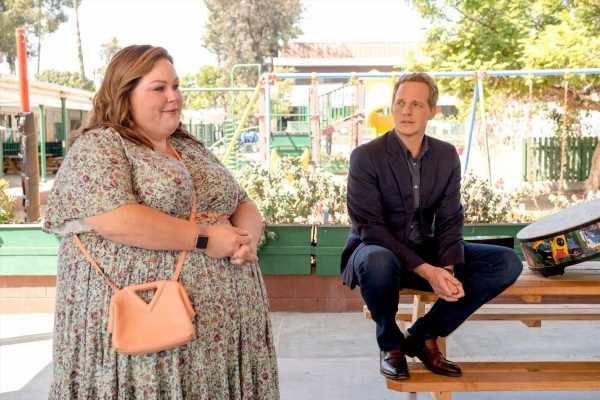 This Is Us fans are in for a wild ride when the show returns for season 6, thanks to Rebecca’s health, Kevin’s love life, and the courtship of Kate and Phillip. With Kate and Toby’s marriage on the precipice of falling apart, the second member of the Big Three could look to her boss for comfort. But, according to Chrissy Metz, things won’t be easy for Kate and her future husband.

Kate will marry Phillip in ‘This Is Us’ Season 6

As This Is Us fans recall, the final scene of the season 5 finale propelled the show five years into the future to Kate and Phillip’s wedding day.

Throughout the series, the flash-forwards to the cabin have indicated that Kate and Toby aren’t together in the future. However, fans were not expecting Kate to get remarried and to her rude British boss of all people.

Since This Is Us Season 6 is the final season, we will undoubtedly see how Kate and Phillip form a romantic bond and how Kate and Toby’s marriage unravels. Let’s just hope that the mystery of whether or not Kate is alive in the future is solved sooner rather than later.

While on the red carpet for the premiere of This Is Us Season 6, Chrissy Metz talked with Variety about what attracts Kate to Phillip in the final episodes.

“Aside from his British charm and wits, he’s well-fit, as they say,” Metz shared. “He’s just adorable. He’s very smart. And, obviously, as a character, he loves music, and he loves helping kids. He has that very dry humor, very dry English humor. But, he’s also kind of … I don’t want to say he’s a jerk, but he’s definitely …”

The actor added, “But, also, we get to discover who he really is because he’s hiding something. And it’s cool to uncover that. And, I mean, if you know [Chris Geere]’s work, you know how special he is.”

By going off of Metz’s comments, the secret that Kate learns about Phillip in This Is Us Season 6 is a good one. And, hopefully, the thing that Phillip is hiding makes fans warm up to him.

Will Toby try to win Kate back?

We know that This Is Us Season 6 will have many surprises in store for us, including whatever happens between Kate and Phillip. But can fans expect to see Toby trying to repair his relationship with Kate even after she gets with her British beau?

Tune in to the premiere of This Is Us Season 6 on Jan. 4 at 9 p.m. ET on NBC to see the beginning of Kate and Phillip’s love story.