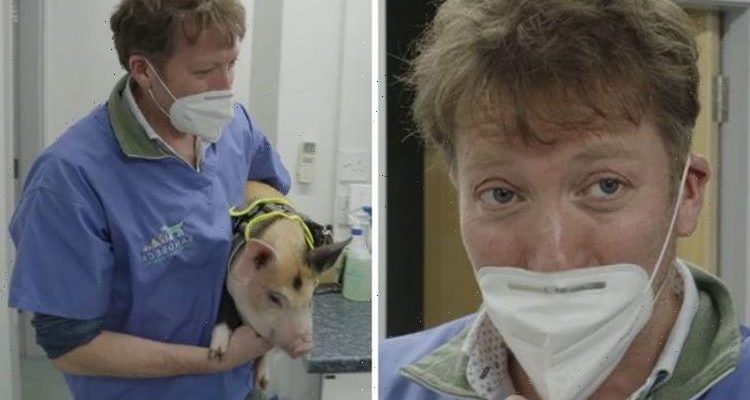 The Yorkshire Vet Julian Norton deals with extenuating circumstances every day in his surgery, and in an upcoming episode, he deals with his noisiest patient yet. Owner Joy brought her pet pig, Pigley Scott, into the surgery to be castrated as he had been getting amorous with her dogs, but he proves to be a difficult patient for Julian and his staff.

Joy rescued Pigley Scott from China after being dumped at a pet shop and has been living in the house along with her rescue dogs.

Speaking about her relationship with her pets, Joy says: “He is amazing, he gets on so well with the dogs, the horses and my granddaughter.

“He sleeps in a bed by the Aga with my dog, he’s brought so much joy to my life, he’s my favourite boy in the world.”

Joy brought Pigley into Julien’s new surgery Sandbeck Veterinary Centre in Wetherby to ask him to remove his testicles as he had been getting affectionate with the dogs.

Speaking to Julian before the surgery, Joy said: “When I’m standing in the kitchen chopping stuff, he’s biting the back of my heels, he lives in the house.”

Julian laughed: “He’s an absolute star, and more importantly, he likes me, but for how much longer I don’t know, are you going to wait whilst we do it?”

Curious about the surgery, Joy asked how long it would take and whether she should stay behind to wait.

After Julian informed her it would only take 10 minutes, he explained: “There will be a bad screaming noise when I do him, not because it hurts but just because pigs don’t like things not going their way.

“Right then, Pigley, you come with me, come on,” Julien took Pigley through to nurse Lucy, who was waiting in the other room.

“Come on, good boy, adventures this way, he doesn’t want to walk,” Julian shouted over the squealing noises.

Speaking to the camera, Julian explained: “Well, Pigley’s very wriggly, which makes it quite difficult for Lucy, I’m worried about what the patients in the waiting room are thinking.”

In the commotion that follows, Julian injects himself by mistake with the local anaesthetic leaving him with a numb thumb.

Also, in Tuesday night’s show, vets Matt Smith and David Melleney head to a local farm where it looks like a pregnant cow requires an emergency C-section.

Later, when a German shorthaired Pointer requires surgery, his owner is beside himself with worry, and vet Peter Wright sees some goats named after the famous Flowerpot Men – Bill and Ben.

Series 13 kicked off at the beginning of September and saw Julian setting up his new practise after moving from his home base in Boroughbridge.

The first episode saw Julian performing a caesarean on Violet, the dog whose puppies’ lives were at risk.

Matt Smith commented on his position within the team and said: “We have been warmly welcomed by the fans of the show and now feel really part of the team.”

Shona Searson also added: “It’s great that I got to be part of the show as it demonstrates that women can too be farm vets.

“I am really enjoying being part of the show,” she exclaimed.

The Yorkshire Vet is on Channel 5 tonight at 8pm.
Source: Read Full Article