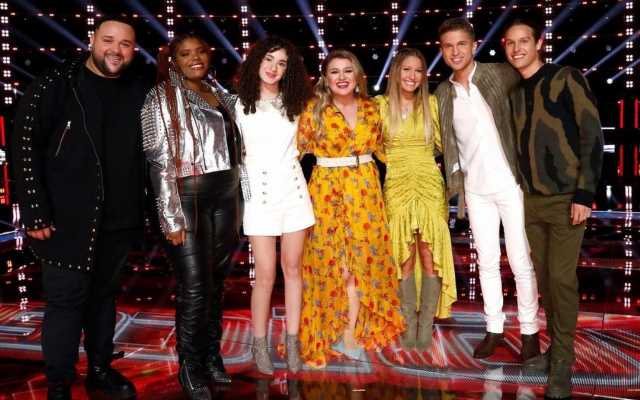 A new episode of the show features singers from each team of the coaches, Ariana Grande, Kelly Clarkson, John Legend and Blake Shelton, singing song dedicated to their loved ones.

AceShowbiz -The Top 13 of season 21 offered emotional performances on dedication week. The Monday, November 15 episode of the NBC show featured singers from each team of the coaches taking the stage to sing a song dedicated to their loved ones.

Team Kelly Clarkson‘s Jeremy Rosado took to the stage to sing Celine Dion‘s “Because You Loved Me” for his father, who has a heart condition. “He’s the reason I am here… I don’t know how much more time I get with him,” Jeremy said. Of the performance, Kelly said he “killed it”. Ariana Grande agreed, saying, “It’s a huge to-do to sing Celine… but you sang the heck out of it.”

Later, Hailey Mia dedicated The Pretenders “I’ll Stand By You” to Kelly. “You have showed me that you believed in me so much,” so Hailey explained. Rounding out Team Kelly were Gymany, who performed Travis Greene‘s “Made A Way” in honor of her mother, and Girl Named Tom, who belted out “Dust in the Wind” to their grandmother who is battling dementia.

Performing next were singers from Team John Legend. Jershika Maple belted out “God Only Knows” by King & Country for two teachers who helped her through grade school after she was “teased and bullied” for having dyslexia. Kelly called Jershika a “majestic messenger” for her performance. Shadale then sang Rascal Flatts‘ “Life is a Highway” in honor of her truck-driving father, while Joshua Vacanti, sang “You Will Be Found” from “Dear Evan Hansen” for the music teacher who pulled him out of the darkness when he felt “alone.”

Team Blake Shelton‘s Paris Winningham dedicated Marvin Gaye‘s “What’s Going On” to his grandmother, who dealt with “racial injustices.” He wasn’t be able to be there with her when she died in 2020 “due to being in the Navy.” Lana Scott sang Tim McGraw‘s “Humble And Kind” for her father before Wendy Moten took the stage to dedicate Linda Ronstadt‘s “Blue Bayou” to her high school teacher.

Jim & Sasha Allen from Team Ariana dedicated Elton John‘s “Your Song” to their cousin Stephanie, a talented dancer and medical student who died at age 26. Singing Fleetwood Mac‘s “Rhiannon” in honor of her younger sister, who is also named Rhiannon, was Ryleigh Plank.

Ariana praised her for the performance, saying that her rendition was “one of my favorite performances of yours to date.” Rounding out the night was Holly Forbes, who sang Garth Brooks‘ “The Dance” to show her gratitude to her stepmother for raising her since she was 2.

The results will be revealed in the Tuesday, November 16 episode.