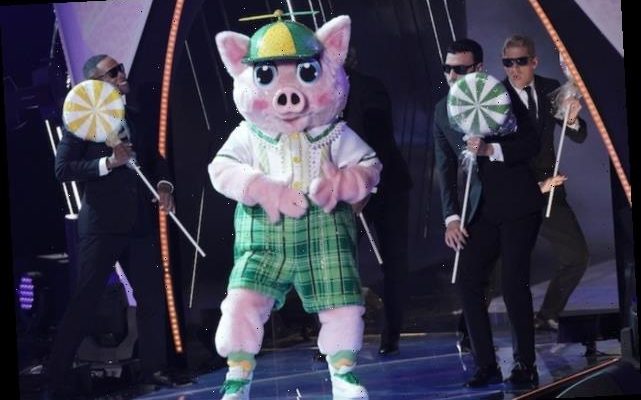 Group B’s entreé in this week’s The Masked Singer introduces us to five new contestants: Phoenix, Grandpa Monster, Black Swan, Chameleon and Piglet. And the voice and clues on that last one are very reminiscent of a certain 98 Degrees member, in my opinion. But we’ll get to that in a minute. First, a note: As Cluedle-Doo informed us, the wild card contestants will show up next week. So prepare yourselves. And now, a quick recap of the performances! 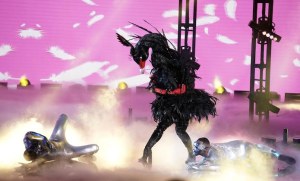 BLACK SWAN | Black Swan’s voice, demeanor and ease on stage as she performed Heart’s “Barracuda” made it clear that she’s done this kind of thing before: If we’re not dealing with a recording artist, I will be surprised. Yes, I know she said she’s “far out of her comfort zone,” but can’t that be true of anyone — regardless of prior experience — singing their heart out from inside pounds upon pounds of foam rubber? And c’mon, the bravado with which she hit those high notes and her ease in floating all over the melody? She’s done this before. Clues included: “Black Swan has covered a monster,” a wanted poster, a reward voucher with the letters R and V highlighted, a chess bishop, a diamond ring, a red square and references to “a Hollywood deal I couldn’t resist. One that would make my dreams come true” but from which “my faithful flock” eventually flew to her rescue. (My guess: no clue)

GRANDPA MONSTER | Though GM came out on stage like he was 100 years old, his vocals and dance moves revealed that he’s probably a bit younger than we originally thought. “Reflecting on my long life, I can’t believe the troublemaking fool I was as a youngster,” he told us before launching into a fun take on Lou Bega’s “Mambo No. 5 (A Little Bit Of…).” His voice was clear, his tone was warm, and his high kicks were energetic. Other clues included: the beach, “Grandpa Monster has trained for battle before,” references to football, a 6, 97 percent, “I decided to put the “i” in “Einstein,” and a kettlebell marked “6.2 tons.” (My guess: I don’t have one yet, and the body type was wrong, but I got Gabriel “Fluffy” Iglesias vibes from the performance. So maybe someone kinda like him? This is not correct, but at the moment, it’s all I’ve got.) 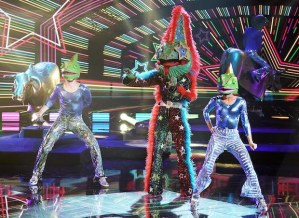 CHAMELEON | Chameleon’s clues package was super gadget-y, full of joysticks, computers, video games, a turntable and wires/circuits. “I put the ‘tech’ in ‘technology,’” he said. His performance of Nelly’s “Ride Wit Me” was really pleasant and flowed well, though it seems like Chameleon isn’t real comfortable dancing while singing. Clues included: “Chameleon has a history with precious gemstones,” a motorcycle, references to his father, a sign reading “beware of pit,” and fuzzy dice showing two dots and three dots. (My guess: music producer Benny Blanco.)

PIGLET | “Piglet knows how to stay cool, even in the heat,” Cluedle-Doo informed us at the start of the porcine wonder’s performance. His whole clue package was about having romantic mishaps in his past, and that voice as he sang Dan + Shay’s “Speechless”? You cannot tell me that is not the former Mr. Jessica Simpson, Nick Lachey. Clues included: a question mark, a clock, a heart-and-axe tattoo, a lollipop and a fortune cookie. (My guess: Lachey all day!) 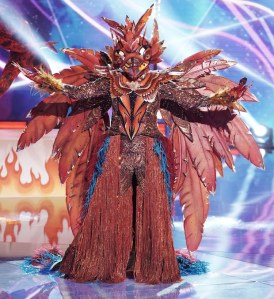 PHOENIX | “When people see me, they always see a winner, baby,” Phoenix says in the intro to their clue package. That, coupled with the truly rough speak-singing they did to Kesha’s “Tik Tok” and the clue about having hidden behind a mask for most of their life, helped me zero in on this one long before the final unmasking. Anyway, other clues included: “Phoenix only has one speed — 76 mph,” references to being on magazine covers, ballet shoes, six little phoenixes, oranges and a crown. (My guess: 1976 Olympic gold medalist Caitlyn Jenner.)

THE UNMASKING | Phoenix was unmasked, and the fiery bird was revealed to be Jenner.

Now it’s your turn. What did you think of the episode? Watch Jenner’s unmasking below, then sound off in the comments!