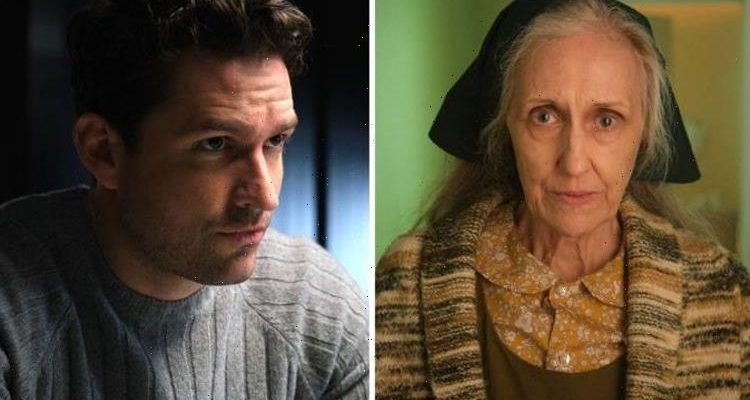 Anita Dobson discusses her character in drama The Long Call

The Long Call is the third of author Ann Cleeves’ novels to be turned into a TV drama, following the likes of ITV’s Vera and BBC’s Shetland. The four-part series follows the life of Detective Inspector Matthew Venn (played by Ben Aldridge) who moves back to the strict religious community where he grew up after his dad dies. But Matthew stays in town as a murder soon occurs which the local police department needs help with.

WARNING: This article contains spoilers from The Long Call.

The new ITV drama kicked off on Monday, October 25 with Matthew returning to the small North Devon town with his husband Jonathan Venn (Declan Bennett).

Matthew left 20 years ago after he was rejected by his family for being gay.

When the series started, he was reunited with his mum Dorothy (Juliet Stevenson) who was ashamed of her son, not wanting him to attend the funeral.

Although this brought up feelings of abandonment, he stayed as a body of a man with an albatross tattoo on his neck was found on the beach.

Will there be another series of The Long Call?

As of writing this article, there has been no mention of a second season of The Long Call.

The final part in season one will be airing this evening, Thursday, October 28, on ITV.

Typically, channels like to assess whether a show is worth bringing back or not with the help of ratings and viewers’ opinions.

As The Long Call’s first series is yet to finish, it may be a while before an official decision is made.

But given Cleeves’ history when it comes to her TV work, it does seem likely the drama will be renewed.

Cleeves’ Vera starring Brenda Blethyn returned for the start of season 11 in August 2021.

The rest of the series will be shown sometime at the start of 2022.

Meanwhile, Shetland on BBC One has already been given the go-ahead for season seven.

Express.co.uk will update this article once more details have come out about The Long Call’s future.

For now though, fans have the rest of series one to look forward to, especially after the unexpected twist in episode three.

Rosa told Matthew and Jen Rafferty (Pearl Mackie) that she had been sexually assaulted at The Woodyard.

But to everyone’s surprise, it turned out it was Ed Raveley (Amit Shah) who was responsible.

And going by the description of episode four, there could be even more surprises to come.

The synopsis for the final episode of The Long Call season one reads: “Despite key breakthroughs, the team are frustrated until an important piece of evidence sets Matthew on the path to finding the murderer.

“Through learning to let go of the shame his upbringing taught him, Matthew finds clarity on the true events surrounding the murder at Crow Point.

“Matthew has a chance to solve the case with the killer in his sights, but he must be careful knowing someone else is in danger.

“In the clear light of day, the crimes of the past are laid out for all to see.”

The Long Call season 1 will conclude on Thursday, October 28, at 9pm on ITV. The Long Call is also available to watch on ITV Hub.