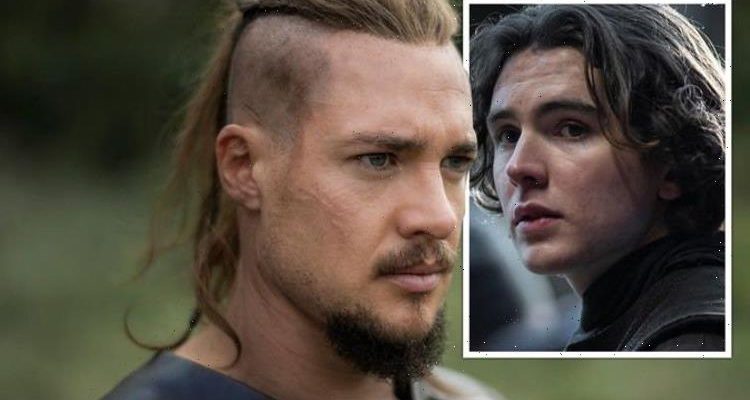 The Last Kingdom season five will air on Netflix in the near future and fans were thrilled to hear Uhtred’s (played by Alexander Dreymon) story would continue. The star announced he would feature in a new film titled Seven Kings Must Die, which is expected to be based on the remainder of Bernard Cornwell’s Saxon Stories. Fans are keen to find out which characters from the original series will join Uhtred in the film.

Who will return for Seven Kings Must Die?

The two-hour Netflix film will see production start in 2022, and filming will take place in Budapest.

Dreymon said The Last Kingdom was always going to end on season five as it is based on the first 10 books.

The film should cover Cornwell’s final three books and bring Uhtred’s journey to a satisfying end.

The cast teased he may not be the only character to return from the original series.

This has led some fans to believe she will survive and make an appearance in the feature-length film.

Taking to Reddit, one fan said: “I think Aelswith will be alive for Seven Kings Must Die. Eliza Butterworth was on the call/zoom chat when Alexander Dreymon announced the movie.

“So, this could be the indication that Aelswith is around for the movie. I don’t know if that’s a good idea because in that case, she would be alive maybe 30 years after she died historically.

“I’m honestly curious to see her role in season 5 if she does survive.”

At the end of season four, Aelswith was poisoned by Lord Aethelhelm (Adrian Schiller) and her fate was left hanging in the balance.

In promotional photos of the new season, she looked rather dishevelled and so viewers think she will meet her demise in season five.

The son of King Edward (Timothy Innes) went away with Uhtred at the end of the fourth season to train as a fierce warrior and strong leader.

The film is likely to follow Aethelstan as he attempts to claim Northumbria.

The extension of the series is expected to be based on the books War of the Wolf, Sword of Kings and War Lord.

War of the Wolf features King Edward, so there is a chance Innes will reprise his role for the film.

The antagonistic Lord Aethelhelm is also central to the plot, so he is likely to make a comeback.

Fans could also see more of newcomer Sigtryggr (Eysteinn Sigurðarson) – the Dane who stole the heart of Uhtred’s daughter in season four.

Sigtryggr and Stiorra (Ruby Hartley) were seen riding off into the sunset together after Uhtred let her leave.

The actor featured alongside Dreymon for the announcement of the film, so viewers are of the opinion he could be on board with the project.

Fans took to Twitter to share their thoughts on the announcement, with Joshuap96 saying: “So hyped right now. We all know Series 5 is coming.

“So this is much better than a release date. I am excited to see a movie for TLK. I mean it is a great send off. I haven’t read the books so I am going into this completely blind and I am excited for it.”

However, Trey Hubbard said: “We need to see it all. Don’t just leave it at the movie. Keep going for the rest of the books. We need 10 seasons of The Last Kingdom.”

The Last Kingdom seasons 1-4 are on Netflix now.