Who says college campuses and comedy don’t mix these days? Netflix’s new series The Chair — debuting Friday, Aug. 20; I’ve seen all six episodes — proves they still can, mining plenty of sly laughs from a supposedly humorless setting. (It’s rarely laugh-out-loud hilarious, mind you, but more mildly “oh, that is funny” amusing.) Rich with intriguing characters and armed with a breezy comedic tone, the campus comedy from first-time showrunner Amanda Peet is a smart, low-key charmer that sneaks up on you.

The story takes place at Pembroke University, a prestigious but dusty Ivy League-ish college with lots of portraits of old white men on the walls. Sandra Oh stars as Jin-Yoon Kim, a dedicated academic who has now risen to become the first-ever female chair of the school’s English department. She’s proud of her accomplishment, but now she’s learning how tough it is to be in charge, forced to make hard budget cuts, defuse brewing scandals and fend off overreaching administrators and donors. A wealthy benefactor keeps pushing for this year’s distinguished guest lecturer to be… David Duchovny. He went to Yale, you know! 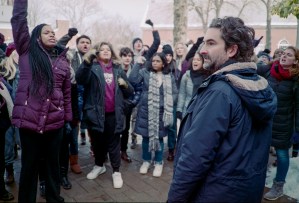 Jin-Yoon’s biggest problem: Her department is plagued by a cluster of crusty old white professors whose huge salaries and outdated teaching methods are holding back progress. (Bob Balaban is perfectly cast as the imperious Elliot.) Plus, she has to babysit her department’s most popular professor: Bill Dobson (Jay Duplass), a failed novelist and a drunken mess. (Yes, he’s a cliché, but at least he’s aware that he’s a cliché.) Jin-Yoon goes into crisis mode when a moment of stupidity from Bill goes viral and snowballs into a full-blown scandal, threatening to bring the whole system crashing down.

The perpetual culture clash between college professors and students is fertile ground for conflict, and The Chair does boldly dip its toe into thorny issues like racism, sexism and white privilege. But thankfully, it never gets too bogged down by those issues to lose its sense of humor. The gaping generation gap is a reliable source of laughs, and while most of Pembroke’s students are generically woke and don’t really stand out, no one here is made out to be a villain. Even the crusty old professors are given dimension. (It feels like it’s based on a novel, even though it’s not. It has that literary feel to it.) 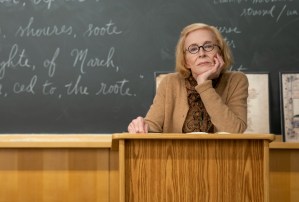 Oh has always shown hints of comedic flair on dramas like Grey’s Anatomy and Killing Eve, and it’s fun to watch her get to fully explore that side of herself here. (Jin-Yoon is a complex jumble of neuroses, ambition and good intentions.) Duplass is solid, too, as Bill, but I wasn’t sold on the dynamic between him and Jin-Yoon. The show seems to want to shove them together romantically, when it’d be better if it just let them be friends. But Holland Taylor is a feisty treat as Joan, one of those crusty old English professors who’s exiled to the basement of the school’s fitness center and is determined to find out which student is trashing her in his teacher evaluations. It’s a goofy subplot, but Taylor has a lot of fun with it; this is her best role in years.

The Chair is a nice, tidy six-episode binge, and at about three hours total, it feels like a slightly extended indie-film comedy, set to a soundtrack of jangly college radio hits from the likes of Vampire Weekend and the Smiths. We know Peet as an actress, but this is her debut as a TV writer and showrunner, and she shows a real knack for humanist comedy. (Peet’s husband David Benioff and his Game of Thrones partner D.B. Weiss serve as executive producers, too, but don’t worry: This one sticks the landing.) The scripts have a distinctly dry sense of humor, and the cast finds a nice rhythm right away. It’s like they’re thankful to be in something that’s actually grounded and funny and true to life for once.

It wraps up nicely as a self-contained story, too, so I’d be fine with it being a one-and-done series, I suppose — but this campus tour was so enjoyable, I’d happily sign up for more.

THE TVLINE BOTTOM LINE: Netflix’s campus comedy The Chair makes the grade with a smart, humanist tone and a wealth of intriguing characters.