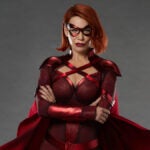 “Surprise! We’re almost finished with eight episodes of our animated series, ‘Diabolical.’ We gathered together some incredible creators and we gave them one rule…just kidding, there’s no rules,” Kripke said. “They blew the doors off it, delivering eight completely unexpected, funny, shocking, gory, moist, emotional episodes. You think ‘The Boys’ is nuts? Wait till you see this.”

Rogen and Goldberg added: “Ever since we saw the animated film ‘The Animatrix,’ a series of short animated films set in the universe of ‘The Matrix,’ we’ve wanted to rip it off. Today that dream has come true.”

Readers can watch “The Boys” star Karl Urban, who plays Billy Butcher, reveal the big “Diabolical” news via the clip above, which is a recorded message that was unveiled Sunday during Prime Video’s block of virtual panels at CCXP Worlds 2021.

No, he did not announce a Season 3 premiere date for “The Boys,” so stay tuned for that news, which we hope is coming soon.