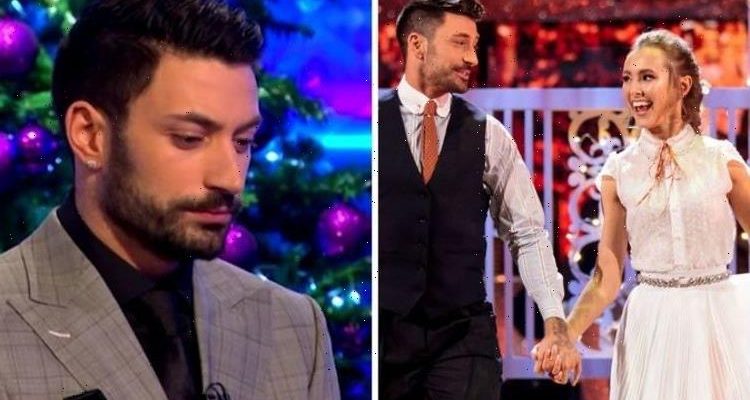 Strictly: Giovanni would be 'jealous' of someone else with Rose

Strictly Come Dancing finalists Giovanni Pernice and Rose Ayling-Ellis were invited onto Thursday’s instalment of It Takes Two to discuss their hopes for the Grand Finale this Saturday. The couple has Waltzed their way through to the final, gaining a huge following of supporters along the way. Discussing their journey, Giovanni confessed he would have gotten incredibly jealous if the EastEnders star was partnered up with another pro.

The pair have outwardly spoken about sharing a very close bond, and during their latest It Takes Two appearance, the Italian professional opened up about their partnership.

Speaking to the BBC Two show’s host Janette Manrara about approaching this series with Rose, Giovanni explained: “I think at first it was obviously different because I’d never done anything like this before.

“I realised I have to change and adapt my way of teaching. And only with the help of Rose, we manage to find a way that works for both of us.

“Both of us now understand what’s good for us. Since day one, it’s been a dream.”

The 31-year-old continued: “If she was dancing with somebody else, I’d probably be jealous. I’d be like, argh I want to dance with her.”

Giovanni revealed his Strictly highlight has been spending every day with Rose in the dance studio.

He also said teaching the show’s first deaf contestant has been a “rewarding” experience.

Giovanni added: “I have been in the show long enough to be ready to challenge myself and in Rose, I had the perfect partner to do that.

“From day one positivity has been the key to our relationship and that’s the reason I think we’re such a great team.

“I always say I’m the one privileged to be able to do this journey with Rose – if she was doing it with somebody else, I would be quite jealous! Big time.

“I might be the dance teacher but for me, the highlight has been spending every single day in the studio with Rose, her positivity, the happiness I have every single day, it has been joyful, and it is the first time I don’t want this to finish.”

The dancer also explained he often forgets Rose is deaf because she dances like a true professional.

Rose has sparked big changes for the deaf community through her dancing on Strictly.

The star, who was born deaf, and uses a mixture of oral English and British Sign Language (BSL) to communicate, has led to a 488 per cent increase in the Google search for the term sign-language.

Rose and Giovanni made Strictly history early this season when the music was purposely cut off midway through their dance and the pair continued their routine in silence.

It gave viewers a look inside Rose’s world and touched the judging panel and fans watching at home.

Rose will be battling out in the final with AJ Odudu and Kai Widdrington, and John Whaite and Johannes Radebe.

The actress is currently the favourite to win the Glitterball Trophy with her odds at 1-8 to win the competition.

The Strictly Come Dancing final airs at 7pm on Saturday on BBC One.