Sonja Morgan may have just revealed that filming for the upcoming season of Real Housewives of New York is underway. Sonja posted a picture on her Instagram of her posing with her two Housewives costars, Ramona Singer and LuAnn de Lesseps.

In the picture, Ramona wears a long cream-colored jacket with matching pants.

LuAnn also wears a cream-colored blazer over a black top with cream-colored pants. She also sports a stunning long and beaded necklace.

Sonja poses in between the two wearing a tropical-patterned romper and wedges.

“Charlie’s Angels are back #RHONY #bravotv #sonjamorgannewyork #sonjamorgan #charliesangels,” Sonja wrote in the caption of the Instagram post.

Fans took to the comments section to compliment the women. Many commented on how young Ramona looked. Some even claimed they mistook her for her daughter Avery at first glance. Others insinuated that Ramona got work done on her face. 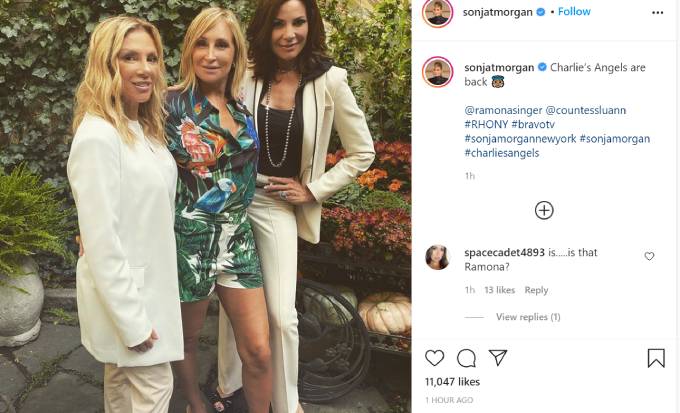 “Ramona in the garden is always fun,” she wrote in the photo’s caption.

Sonja not only said that they’re “back” together again, but she used the hashtags #RHONY and #bravotv in her caption. That could indicate that the reason behind the ladies’ reunion was to film Season 12.

Additionally, this is the time of year RHONY tends to film. The premiere typically kicks off with the women returning to Manhattan from their summers in the Hamptons and runs up until the holiday season.

While it is plausible to assume that Bravo may have pushed back on filming RHONY due to the pandemic, it appears that the show is going forth as planned.

Which housewives will return for filming

Ramona, Sonja, LuAnn, and Leah McSweeney have all confirmed that they’ll be returning for RHONY Season 12. Leah was hesitant about returning but agreed to after Bravo gave her a pay raise.

Tinsley Mortimer, as expected, will not be returning after moving to Chicago to live with fiancé Scott Kluth.

While the show lost Tinsley and Dorinda, the show gained its first Black cast member. Eboni K. Williams has been officially confirmed as a RHONY cast member.

There were also reports that Bershan Shaw would be a part of the show. It is uncertain whether she’s an official cast member or she has a friend role.

The Real Housewives of New York City is currently on hiatus on Bravo.