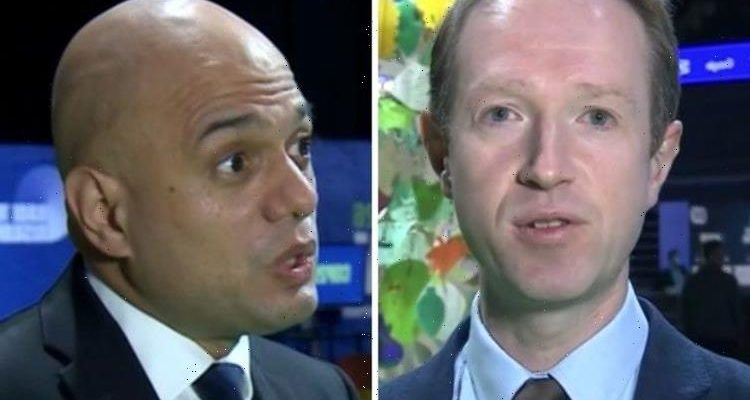 Sajid Javid, the Secretary of State for Health and Social Care, was skewered by BBC Breakfast’s Adam Fleming over MPs securing second jobs during Wednesday’s instalment of the show. During the tense exchange viewers took to Twitter as they noticed the minister was “breaking into a nervous sweat”.

Javid was interviewed live from Glasgow, as he was attended Cop26, on Wednesday’s instalment of BBC Breakfast.

When Fleming probed the minister if he was comfortable about MPs working second jobs outside of Westminster viewers noticed he started to sweat.

Enna tweeted: “Interesting #SajidJavid breaking into a nervous sweat on BBC breakfast when asked about MPs’ second jobs and going on the defensive as he wrongly thought the question was about him.”

Colman tweeted: “Sajid Javid working up a bit of a sweat when questioned by Adam Fleming on BBC breakfast about [Geoffry] Cox, and the possibility he may have pushed the boundaries.”

READ MORE: Alana and Jason Married At First Sight Australia: Are they together?

Paul remarked: “#SajidJavid #BBCBreakfast is it me or is Sajid Javid sweating a lot this morning?”

Sarah commented: “Sajid Javid is not looking like the picture of health sweating away there on BBC Breakfast.”

During the interview, Felming asked: “You’re [in Glasgow] now and Boris Johnson is going to be here at lunchtime.

“Labour are saying he’s doing a day trip to avoid the headlines about Conservative MPs and MPs with second jobs other than Westminster.

“Are you comfortable that Geoffry Cox was doing his job as an MP at the same time he was representing the government in the British Virgin Islands?”

The question came in wake of Labour calling for a standards investigation into a possible rule breach by Sir Geoffrey Cox after a clip appeared to show him using his Parliamentary office to undertake work for the British Virgin Islands inquiry.

Javid replied: “You have just asked me about an individual case, Geoffrey Cox’s case, and I am not going to get into any individual case certainly if I don’t know all the details.

“What I do know for any MP if they do have any external interests is that they should of course be completely open and transparent about that and follow all the rules all the time, including their lobbying.

“And if there is any MP that someone thinks hasn’t done that, then it’s not for me, it’s for the regulator.”

Javid appeared to break out in a sweat before Fleming asked him whether it was acceptable to do a virtual meeting for a private employer from a House of Commons office.

Javid replied: “I am not going to get into any individual case but what I will say is if you have an external interest then I can’t see why you would be using anything that is funded by the taxpayer.”

Fleming went on to probe the minister on his role as an adviser to JP Morgan and asked if he ever did meetings from his Westminster officer.

“I have had phone calls, I might have received a phone call,” Javid explained.

“If you are asking if I used Parliamentary computers or something else I wouldn’t have done that.”

BBC Breakfast continues weekdays on BBC One between 6am and 9am.