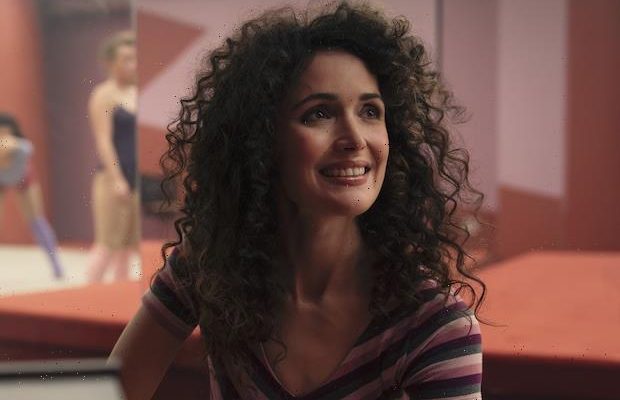 Rose Byrne is about to get Physical on your screens — though not in the light, bubbly way that the Olivia Newton-John music video evokes.

In Apple TV+‘s new, dark comedy (premiering this Friday, June 18 with three episodes, followed by weekly releases), the Aussie actress plays Sheila Rubin, a  housewife in circa 1981 San Diego whose husband Danny (Superstore’s Rory Scovel) is mulling a run for local office. Sheila, meanwhile, is prone to mull runs to the local fast fooderies, to soothe what ails her by way of a ritual that involves a motel room, copious amounts of junk food, and nudity. Luckily, the imminent boom of the aerobics industry stands to instill Sheila with dreams as big as her hair — and with them, the hope to escape her dusty, grim life.

TVLine spoke with Byrne, who is currently in Australia, about Sheila’s dark secret, the important people in the character’s life, and whether performing 1980s aerobics did a number on her.

TVLINE | The last time I interviewed you was almost exactly 10 years ago today, at the Paris Theater in New York on the Damages Season 4 red carpet.
Season 4…. Oh, my gosh. Take me back. Take me back! Oh, New York….

TVLINE | What do you think the Rose Byrne of 2011 would have been most surprised by, that she experienced in the decade that followed?
Oh, man. I think maybe the pandemic might’ve the biggest surprise. “By the way, there is going to be this thing that’s going that will really destroy lives and economies.” Oh, yeah. That thing.

TVLINE | Since then, you’ve had a terrific big-screen comedy career, most notably with Neighbors, Spy and Bridesmaids. How would you describe the humor of Physical?
[Bridesmaids producer] Judd Apatow described those comedies to me as hard comedies, “getting a laugh every minute or two minutes,” and I love that. It was so specific and a terminology I’d hadn’t really heard before, but Physical is different. It’s dark and it’s as uncomfortable as it is funny, and it’s dealing with harsh truths. It’s a deeply personal story for Annie Weisman, our writer and our creator, and we meet Sheila at a breaking point. She’s suffering with a horrible, debilitating secret — this illness, this addiction she has. She also is in a dysfunctional marriage, and she can’t really find a way out, but then she does through aerobics, of all things. I was so arrested by the pilot when I read it. The writing was deeply uncomfortable and something I hadn’t seen before, but also really funny. 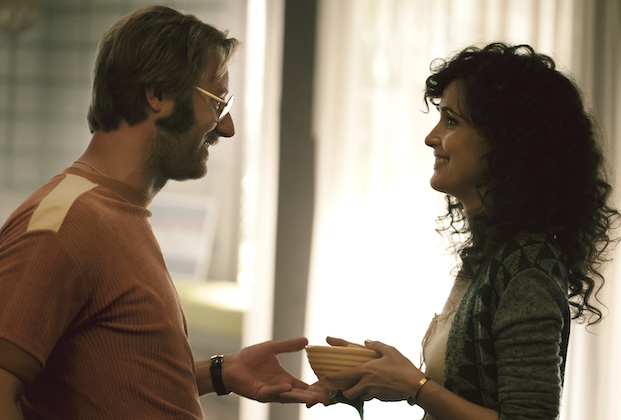 TVLINE | I was quite surprised by where this series goes. What do you think people think this will be about, versus what it actually is?
It can present as a sort of nostalgic look back at the ’80s through aerobics, obviously, but two scenes in it’s pretty clear that it’s not about that at all. It’s a far more personal story about a woman — and it’s about the ’80s but really in a bigger sense it’s about America. It’s about the entrepreneur and that self-made American dream, and how ’80s really started that compared to the ’70s. Sheila and Danny are really still “in the ’70s,” but then slowly she starts to come out of her shell, and I love that duality with her worlds. In the [aerobics] studio, it’s so bright and colorful, and then back home it’s so dark and ’70s and dusty. And then you have the whole evolution of the mall as the modern-day agora.

TVLINE | Would you say Sheila’s debilitating illness is about food, about body, or are the two interconnected?
You know, it’s an illness that’s not really discussed [in the early 1980s] and I think it’s about all of those things. Appetite in women for a long time always has been seen as unappealing and unseemly — any sort of appetite for success, or aggression, or rage, or anything. Obviously some great strides have been made, but I think something like [Sheila suffers from] is a product of a lot of those things. Her traumas become more evident as we go on, and we’ve certainly not seen it depicted like this before with such seriousness. Usually, it’s the butt of a joke or a punch line. 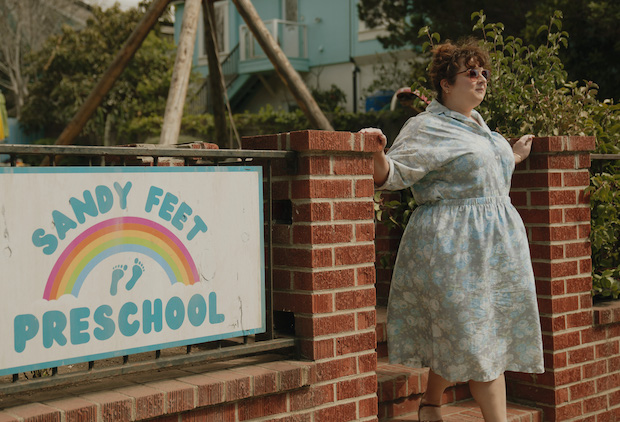 TVLINE | Two of the more important relationships Sheila has are with Danny and with Greta (New Amsterdam‘s Dierdre Friel). How would you describe those individual dynamics?
Well, they’re opposing in many ways. I mean, she’s in this dysfunctional marriage where she’s not seen at all. He’s so absent and he can’t see that she has had this decades-long secret from him; he is absolutely clueless.

And then with Greta, she’s too seen. She’s too in the spotlight. It’s like a flashlight to her face that she wants to hide from because when you’re constantly lying about every single thing you do and think and want, you can’t engage. You absolutely cannot engage, because with any crack in the surface, you’ll fall apart. Sheila is desperately hanging on to that, in her little Hell, and Greta is the opposite. She just wants more and more and more of her, and incrementally, they do connect. 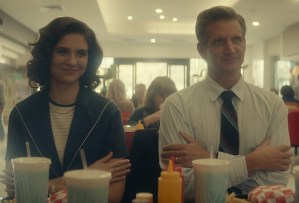 TVLINE | And beyond Danny and Greta, what would you say is the third relationship to watch for on the show?
Gosh, I don’t know how to rate them all, but her relationship with [married real estate developer] John Breem (House of Cards‘ Paul Sparks) is very interesting. He ends up being kind of a quiet mentor and voice in her ear. He is seductive and obviously from a totally different world apart from San Diego, but he really, really does see her and sees her potential. Sheila doesn’t quite know what to make of him, but he plants ideas, and he pushes her and pulls her, and sees what she’s capable of.

TVLINE | As you’re there immersed in the ’80s clothes, sets, gadgetry and stuff, what seemed most foreign to you?
I was born in ’79, so the ’90s is more where I really have deep, emotional memories — like Nirvana, tie-dye, Doc Martens, stuff like that. The ’80s to me is a little more shadowy, being deep into my early childhood. But we had an incredible costume designer, Kameron Lennox, who was given a challenging period to portray, because it’s easy to make it a parody. I mean, you look at images from the time and you cannot believe they’re real. You worry that if you put it on-screen, people will be like, “That’s too much,” but it’s the reality, and she made it incredibly authentic. You never felt like you were in a costume.

TVLINE | And at times, it’s almost as if you let your hair do the talking, let it set the mood.
Yes! Annie had such a specific vision. She wanted Shelia just to fill the frame. 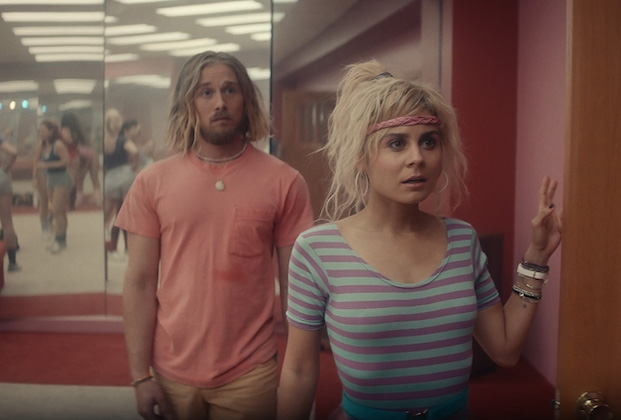 TVLINE | I almost feel obligated to ask: How did the aerobics of this series compare to whatever your real-life workout routine is?
Well, I’m, essentially, pretty lazy. I don’t really have a routine….

TVLINE | So those scenes kicked your ass a bit?
They did. They did. I was really out of shape, and I worked so closely with our incredible choreographer, Jennifer Hamilton, as Sheila evolves. When Sheila starts out, she’s not particularly good, and then she becomes more accomplished as she goes on. But it’s more about the emotional side of it, of her finding a place where she can go and be. It’s like her church. 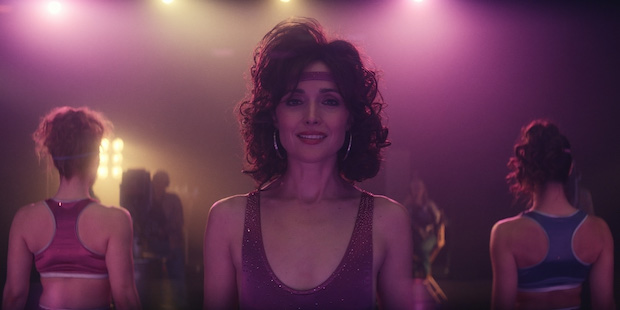 TVLINE | The series opens with an accomplished Sheila getting ready for the lavish production of a workout video. Is that a moment we’re actually building towards, or could it be that that’s not even real?
I can’t reveal too much, but the idea is that it’s a flash-forward. It’s a glimpse of the future, and we definitely played with those images as we go along, where you’re not sure how much is her imagination, and how much she actually does achieve.

Want scoop on Physical, or for any other TV show? Email [email protected] and your question may be answered via Matt’s Inside Line.