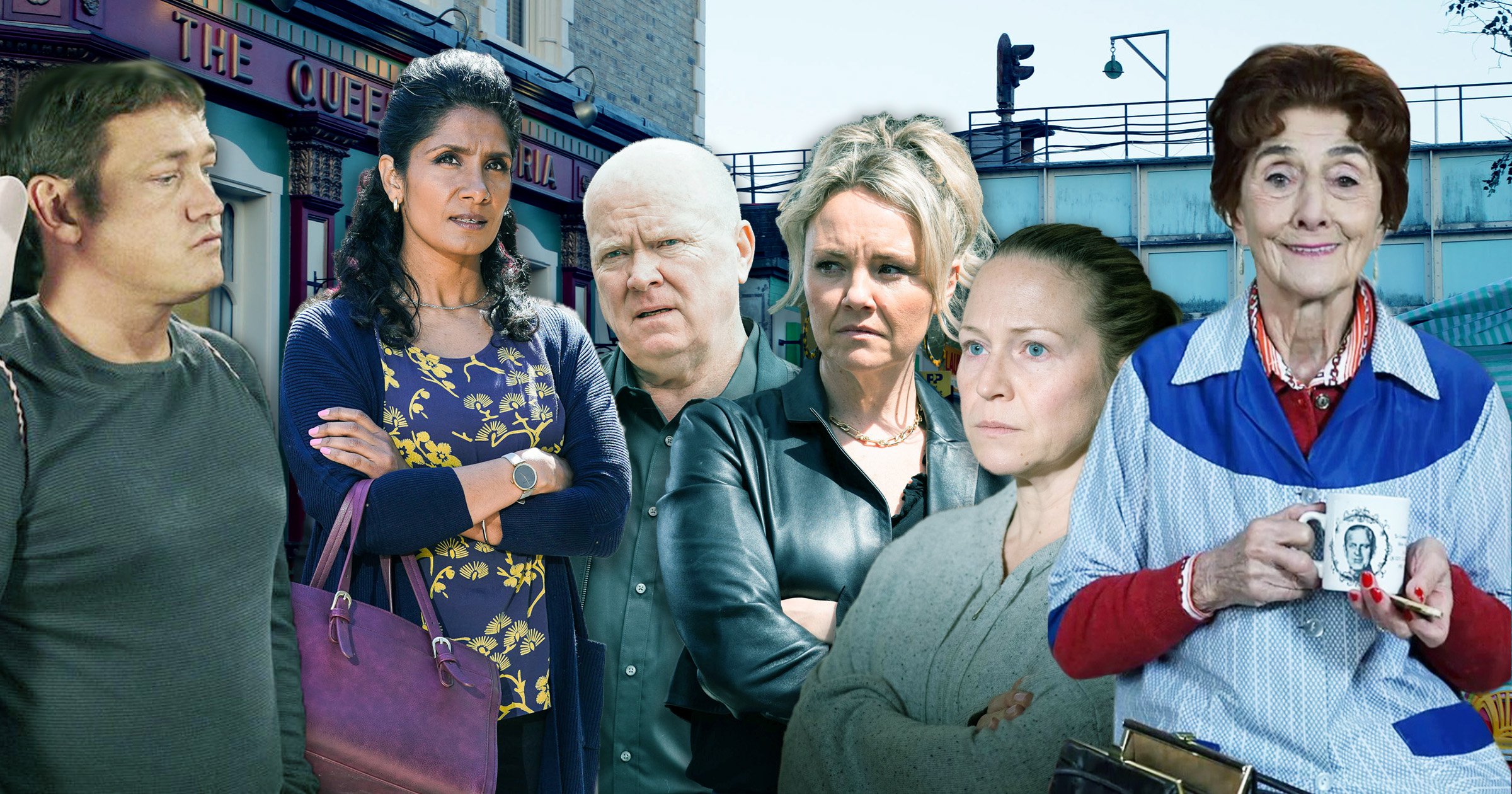 EastEnders has been must-see telly throughout the summer months of the year, but if you thought it was unmissable then, just wait until you find out what’s in store for autumn!

It’s an exciting time at the BBC One soap, with new boss Chris Clenshaw having already made great strides in making the show a must-watch.

With a series of standout storylines having kept us captivated, such as Sam Mitchell’s comeback, Phil’s return from the dead, and the heated feud between Linda Carter and Janine Butcher, the stage is well and truly set for an explosive autumn.

Some of the delightful treats EastEnders will be serving up in the coming months include a historic flashback episode, the arrival of a long-awaited character, and a return we’ve all been asking for for years.

There is also heartbreak on the horizon, as the long-running serial drama pays tribute to quite possibly it’s most iconic character of all time in a special episode that’s not to be missed.

Metro.co.uk took a little trip to EastEnders, where we got all the goss on what’s coming up straight from show boss Chris himself, who told us that he’s keen on ‘endearing to the DNA’ of the show and ‘keeping the core values at the heart’ of it.

‘It’s about friendship, it’s about love” he said. ‘A positive show with larger than life characters with an important message to tell and I suppose ultimately my vision. my plan is to make sure we’ve got the soul in EastEnders.’

Music to our ears!

Now, onto storylines. Are you excited to find out what’s coming up? if so, then wait no longer – sit back, relax and enjoy.

The reason for Keeble’s vendetta against the Mitchells revealed

Phil Mitchell, as viewers will recall, struck up a deal with DI Keeble which saw him agree to be an informant in exchange for his freedom.

Keeble, however, has proven to be a thorn in his side ever since, demanding information on some of his closest associates.

The storyline will reach a dramatic peak next week, as Phil is taken aback by Keeble’s next demand.

Teasing what’s to come in regards to this storyline, EastEnders’ Executive Producer Chris promised that we will soon learn the reason for Keeble’s ‘personal vendetta’ against the Mitchell clan.

The way in which this will be done will be via a special flashback episode, which explores the family’s chequered past.

‘We basically wanted to discover why Phil is the man that he is,’ Chris told Metro.co.uk, discussing the flashback outing. ‘We talked about a flashback scene where we could potentially explore that, and as we spoke further, it just felt like a great opportunity.

‘The show is about family and you’ve got the Mitchells at the heart of this. It kind of grew from a scene into an episode where iconic characters such as Peggy Mitchell [are seen], who is a arguable the greatest matriarch in soap!

‘I was very fortunate to be here when we storylined Peggy’s death, which was under Dom Treadwell-Collins and Rory [Nugent], who is my story producer, and we are both in the story office at the time and it was such a responsibility to give her what she deserved, what the character deserved and what the audience deserved.

‘As we were talking about this flashback, it just seemed like such an opportunity where you get to see Peggy and Phil, and Grant and Archie and Glenda, and Ronnie and Roxy, and Sam before we ever knew them – and to understand why they became the characters we know and love.

‘And also understand and discover more about a character that we’ve never explored on the show – which is Eric, who has always been so vividly drawn. We know so much about him although we’ve never had a chance to really get under his skin.

‘It just felt like too good an opportunity, however a massive responsibility because they are characters that are so loved and well drawn.

‘We had the story there and that was crucial it fit within the serial narrative although it’s a stand alone piece as well. You can come to that episode and you won’t necessarily know what’s been going on for the last six months with Phil’s story, but I think it’s pretty clear from the top. There’s a lot of treats in it.’

Dot Cotton will be at the centre of a heartbreaking farewell storyline this autumn, following the death of iconic actress June Brown earlier this year.

The beloved character’s final scenes aired on January 21, 2020, when she was seen having a conversation with Martin and Sonia Fowler – and she came to believe that Martin had stolen money from her.

Martin, however, was actually covering for Sonia. ‘Oh, Martin,’ she said. ‘I’ve known you since you was born and your mother was one of my closest friends.’

Dot departed soon afterwards, heading off to Ireland, but her voice was later heard on a recording, as she left Sonia a special message.

June sadly passed away in April, aged 95, and the team at EastEnders are working on paying a ‘fitting tribute’ to one of the most iconic characters and actresses to have ever granced British TV screens.

‘It’s not a story that any of us wanted to think of or do, but under the circumstances, we’ve been working on a story where we will say a final farewell to Dot,’ said Chris. ‘We lost June earlier this year and what it will be is a fitting tribute to both June and Dot.

‘We are working on it as we speak and it will be exactly what June deserves and I think what the audience deserves. We always knew we wouldn’t say goodbye to Dot while she was still with us, but she also knew that we’d have to find a time when we did say that. The hardest day of my time here so far was having to break the news to the cast and crew and whole company that June had sadly passed away.

‘Some of the cast and crew have worked with June for many years – and she is more than just a colleague and a dear friend. I loved going to her dressing room – as script editor you’d go down and speak about a scene, and you’d have a couple of lines to discuss that could take 30 seconds and you’d be there for three hours chewing the fat. It was glorious and we miss her dearly.’

The grande finale for Janine and Mick – as Ricky returns!

Janine Butcher has well and truly got her claws into Mick Carter, having somehow managed to meddle in his marriage to Linda, tearing the soulmates apart in the process.

If that wasn’t bad enough, she has since set her sights on removing Linda from the equation altogether, from attempting to pay her love rival off, to leaving her for dead in a deadly car crash – before setting her up to take the fall for the accident!

Despite this, however, Linda just keeps coming back stronger than ever, and with the electricity between she and Mick starting to return to the fore, it’s safe to assume that Janine will go to extreme lengths yet again to ensure Mick remains by her side.

But that’s not all she’ll have on her plate, as Ricky is set to stage a long-awaited comeback as well.

Discussing what viewers can expect from Janine in the coming months, Chris said: ‘We have Sid Owen reprising his role as the unforgettable Ricky Butcher.

‘Ricky is coming home and his sister Janine is in a relationship with Mick and we’re building to something really climatic between them. Janine has got her everything finally in Mick and the Vic, but we all know how strong the bond is between Mick and Linda and what they have runs very deep.

‘But we know what Janine is like and what she is capable of – and the paranoia sets in. I won’t give away how Ricky comes back but it plays into the Janine story.’

Blast from the past for Sam Mitchell

Sam Mitchell’s return has been everything we could have possibly hoped for, with actress Kim Medcalf having slotted seamlessly back into the role she played decades ago.

The character, as viewers are aware, has been plotting behind Phil’s back, determined to prove all her naysayers wrong and also triumph in proving that she’s a true Mitchell.

The stage has been expertly set for some explosive family drama, and according to Chris, that’s exactly what we’re about to get.

‘Sam has been on screen for some time now and is causing a lot of trouble and has an agenda,’ he said. ‘She is a different Sam – and she is ruthless! We do explore more about why that is when we meet someone from her past in Spain this autumn as well.’

The long-awaited arrival of Nish Panesar

The Panesar clan have swiftly become one of the greatest families to set foot in the Square in recent memory, and fans have longed to find out more about them – namely, about their father, Nishandeep, who is in prison.

It was revealed earlier this year that Nish in incarcerated for murder and, what’s more, he made Suki’s life a living hell – so much so, that she’s dreading him being released.

But that moment is set to arrive imminently, with Chris confirming that the character will be portrayed by the ‘brilliant’ Navin Chowdhry.

Just what will Nish bring to the Square?

Chris reiterated that the Mitchell flashback episode is something that he and the team at EastEnders are ‘very proud’ of and ‘excited’ for, before adding that it’s certainly a possibility to explore other characters’ past in a similar way.

‘This is a world of such rich characters that I think it’s definitely possible to make more of it,’ he said. ‘I’d also love to be transported back to 1950s Trinidad and see a young Patrick Truman. I’m sure we’d enjoy shooting that one as well!’

EastEnders airs Mondays to Thursdays at 7:30pm on BBC One.