Peaky Blinders is just weeks away from returning to television screens across the nation and in the meantime, fans have been drip-fed images from filming.

The latest picture to emerge is of Ada Thorne (played by Sophie Rundle), the first look of her for series five.

It comes from Peaky Blinders official Twitter account which accompanied the photo with the caption: “FIRST LOOK at @rundlesophie as Ada in Series 5 of #PeakyBlinders.”

In the image, Ada is dress to the nines with a thick fur collar around her neck, as well as a small dark green hat donning her head.

Her face is made up in a sophisticated style, but it is her expression which has set tongues wagging.

She seems to be looking over her shoulder into the distance, eyebrows slightly raised and worried whilst a fire is burning bright behind her.

And whilst fans were excited for the first look, they were eager to find out when the popular drama series is returning.

“Send a trailer, give us a date. But we want more. PLEASE,” someone wrote, whilst another added: “Tell us when Season 5 starts, by order of the Peaky blinders.”

In the meantime, there have been some suggestions Tommy Shelby (Cillian Murphy) is going to be involved in a clash. 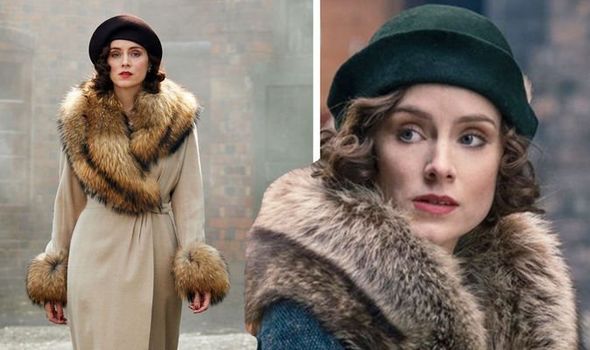 It comes after Hollywood actor Sam Claflin announced he would be joining the cast for the fifth series.

As the show moves further into the 1930’s, producers will introduce real-life politician Oswald who will cross paths with Tommy.

But will their be a dramatic showdown, or will the pair end up becoming allies?

Discussing his debut in Peaky Blinders, actor Sam explained to Metro how he was a “fanboy” of the lead actor and will “nerve forget” his first day on the iconic set.

“Cillian is the most down to earth man with his Irish accent. Then the second he turns into Tommy Shelby you get like, ‘Oh my God hello’, and then Paul Anderson comes in as Arthur…It really is magical.

“They bring that time and era and style to life,” he contused. “So feeling like a small part of that is very exciting.

“I am very excited for the new series,” Sam concluded.

As for where the new series is filmed, the show has returned to its grassroots of Birmingham.

The gangster series is renowned for its recreation of the city in that era.

The series designers managed to be very clever in how they worked with the sets, exteriors, streets, set-dressing and props to create this very realistic world for the characters to inhabit,” director David Caffrey said ahead of the season four release.

Peaky Blinders returns to BBC One this summer.