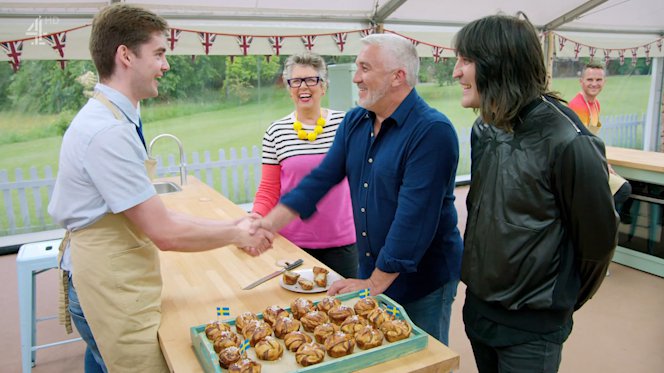 The TV chef’s congratulatory gesture holds the same momentum as getting a 10 from Craig Revel Horwood on Strictly Come Dancing, and now creators are planning to have the gesture printed on ‘hundreds of products’.

‘This isn’t just a reflection of the ongoing popularity of Paul but the continual success story that is the Bake Off,’ an insider told The Sun.

‘It launched in 2010 but 12 years later, it’s still going strong and the creators, Love Productions, are still growing the brand.’

The source also claimed the move will be a big hit with fans of Paul, who judges the show alongside Prue Leith.

The list of products includes everything from kitchen knives, video games and food processors to skateboards, kitchen roll, oven gloves and even underwear.

Meanwhile, last month it was revealed Channel 4 has agreed to a new deal with Love Productions to retain the rights to the competition series until 2024, after poaching the contest from BBC.

Love Productions has also been working behind spin-off shows, including The Great Celebrity Bake Off and Junior Bake Off.

Love Productions chief executive, Richard McKerrow said: ‘We are delighted to have extended ‘Bake Off’s stay on Channel 4 for another three years.’

The show, which is presented by Noel Fielding and Matt Lucas, returned for a festive special which featured the cast of It’s A Sin.

A new group of amateur bakers will gather under the Bake Off tent for endless dessert-based challenges again this year.

The Great British Bake Off is available to watch on All4.