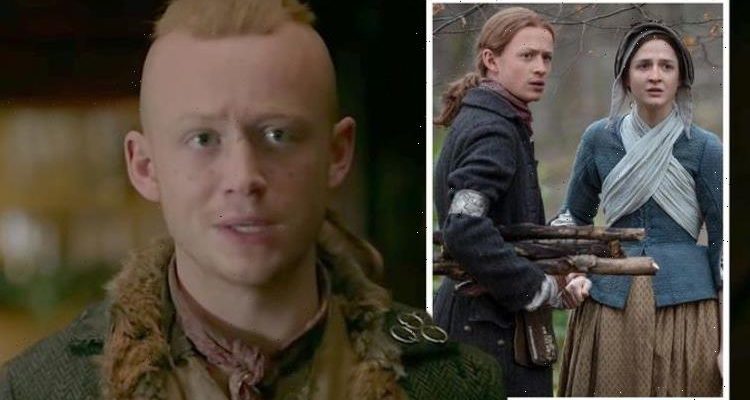 Young Ian (played by John Bell) returned to Fraser’s Ridge in season five of Outlander after he joined the Mohawk tribe in the fourth run. He was not himself and appeared withdrawn as he struggled with personal issues. Young Ian chose not to open up to any of his family and it was only when Roger MacKenzie (Richard Rankin) stopped him from taking his own life that he was able to reveal something terrible happened to him and his wife while he was with the Mohawk. Fans are yet to learn more about the devastating event but some believe Starz have hinted at a tragic end for Ian when the series returns.

Claire was kidnapped and attacked by Lionel Brown (Ned Dennehy) and his men with Jamie rushing to save her.

He thankfully managed to get his wife to safety and killed all of Lionel’s men before taking him back to the Ridge.

While there, Marsali Fraser (Lauren Lyle) poisoned Lionel and he died. It was up to Jamie to return Lionel’s body to his family.

As he did, Jamie read out a monologue which some fans believe holds a clue to Young Ian’s fate.

The Reddit user shared: “At the end of the episode, Jamie holds a monologue after bringing Lionel’s body back for burial.

“Part of the monologue goes ‘honour and courage are matters of the bone, and what a man will kill for, he’ll sometimes die for too.’

“At that line the camera shows Ian playing with Rollo, and the monologue goes further, the spoken word matching the people it would be likely to apply to.

“So…is Ian going to die??? I haven’t finished the books completely yet, but I guess he won’t die in “written in my own heart’s blood”.

“But maybe it’s a clue about stuff that’s going to happen in bees? It made me wonder because it seemed very intentional.”

Other fans were quick to respond to the theory, with one insisting: “I think it’s more foreshadowing about what consequences souring his relationship with the remaining Brown brother might have in the future.”

Another argued: “I just thought it was a reference to the coming war.

“Maybe I was just looking on the surface, though, it was very poetic and could have several deeper connotations. No matter how many times I read/hear that bit, I get the feelings. SO well written!”

It comes as Outlander season six has wrapped filming and will return to television screens in 2022 but one character will not be returning.

Tim Downie, who plays Governor Tryon, recently told Express.co.uk, he would not feature in the run up to the Revolutionary War.

He explained: “I have become governor of New York, so for the moment he will not return this season but I want to say that we do not rule out his return at all.”

Tim continued: “His house is still in North Carolina, there was a city that had his name and he tried to kidnap George Washington, so that can arise.”

Could Jamie come face to face with the Governor during the war and could Young Ian be killed on one of the battles?

Fans will have to wait until next year to find out what the future holds for both characters.

Outlander seasons 1-5 are available to watch on Amazon Prime Video and Starz.