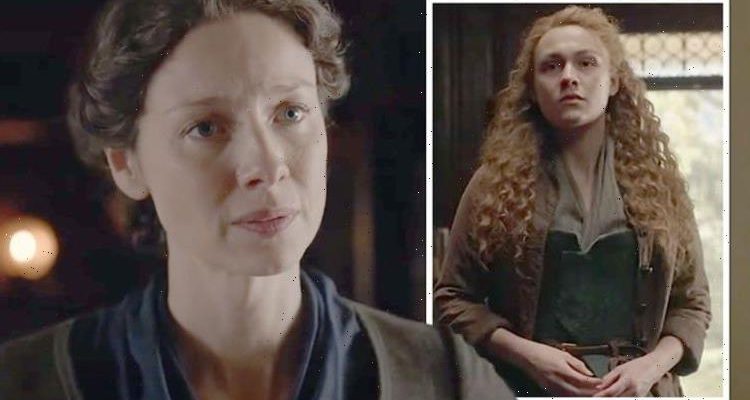 After discovering son Jemmy could time travel in Outlander season five, Brianna Fraser (played by Sophie Skelton) agreed to go back to her own time with husband Roger MacKenzie (Richard Rankin). The couple said their goodbyes to their loved ones but in a strange twist, they ended up back at Fraser’s Ridge. It seemed they thought of the 18th Century as their true home but as the Revolutionary War approaches, Claire Fraser (Caitriona Balfe) could encourage them to leave.

Reflecting on the first time the young couple decide to leave the 18th Century, Caitriona explained: “Bree and Roger discover that Jemmy can travel and so for Claire I think it’s two-fold.

“For one she will really miss them and it will break her heart to say goodbye but I think at the same point she realises that this is what would be best for them.

Will Claire push her daughter to keep her family safe and leave her behind with Jamie (Sam Heughan)?

Brianna travelled back in time to warn her parents they were going to die in a fire but she ended up finding a home.

She and Roger have been living in a little hut with son Jemmy but Claire would never forgive herself if they came to harm.

“It was quite a short goodbye but I think for Lizzie for Bree is one of the fondest ad hardest goodbyes.

“I think she feels quite a responsibility for Lizzie and to leave her behind and not explain why is so brutal.”

The actress continued: “Caitlin who plays Lizzie is amazing and has this almost abandoned animal reaction as she doesn’t know why Bree is going.

“So there are so many lovely scenes and then there actually wasn’t really one between Claire and Brianna.

“So Cait and I talked about it and said, ‘Let’s see what the writers might want to do here.’

“They said it’s almost like less is more in this so now it’s more Claire and Brianna are avoiding each other the whole episode because they both know saying goodbye is going to be just brutal and really difficult.

“What do you say? There’s just no words. It’s one of the shortest and nicest goodbyes in the whole episode because they just kind of walk towards each other and give each other a big hug and everything is said in that.”

“It’s always great working with Sophie,” Caitriona continued. “I think we’ve built up this really lovely relationship over the years and it’s always touching and those moments are always really special to us when we get them.”

In the meantime, the cast have been teasing details of season six with actor Sam explaining it’s “small but mighty”.

Speaking on Just the Facts podcast, he said: “It’s been challenging.

“I’m really pleased with this season. It feels almost like early western vibe.

“And, you know, we’re building to the War of Independence. Obviously, there’s time travel as well and all the other elements. It feels like a small, but mighty season.”

Outlander seasons 1-5 are available to stream on Starz and Amazon Prime Video.