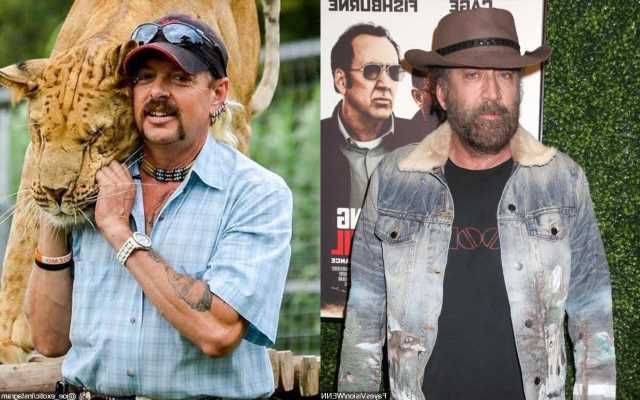 The ‘Ghost Rider’ actor sets the record straight on the rumors suggesting he will play the controversial ‘Tiger King: Murder, Mayhem and Madness’ star in an upcoming TV series.

AceShowbiz –Nicolas Cage has “cleared the record” about his rumoured Amazon series about Tiger King’s Joe Exotic, insisting the programme is “no longer relevant.”

It was reported earlier this year (21) that the “Face/Off” star would portray the big cat collector in a scripted show based on the hugely popular Netflix docu-series and the Texas Monthly article “Joe Exotic: A Dark Journey Into the World of a Man Gone Wild“, written by Leif Reigstad.

However, in an interview with Variety, Cage said that the planned programme had been scrapped.

“We should clear the record,” he said. “I read two excellent scripts, which I did think were excellent, but I think Amazon ultimately felt that it was material that had become past tense because it took so long for it come together.”

“They felt at one point that it was lightning in a bottle, but that point has since faded into the distance and it’s no longer relevant.”

The real Joe Exotic is currently serving a 22-year prison sentence for his role in a murder-for-hire plot against Carole Baskin. He recently asked former U.S. leader Donald Trump for an official pardon in his ongoing fight for freedom.

Another series about Carole Baskin is also developed following the success of Netflix’s “Tiger King: Murder, Mayhem and Madness“. Kate McKinnon has been tapped to play the animal rights activist.

In response to the project, Baskin asked the actress not to use live animals, “We hope McKinnon has a passion for animals and that her series will focus on the horrible lives captive big cats lead when exploited by breeders like Joe Exotic. We further hope she urges the public to support the Big Cat Public Safety Act that would end the cub petting abuse in America.”