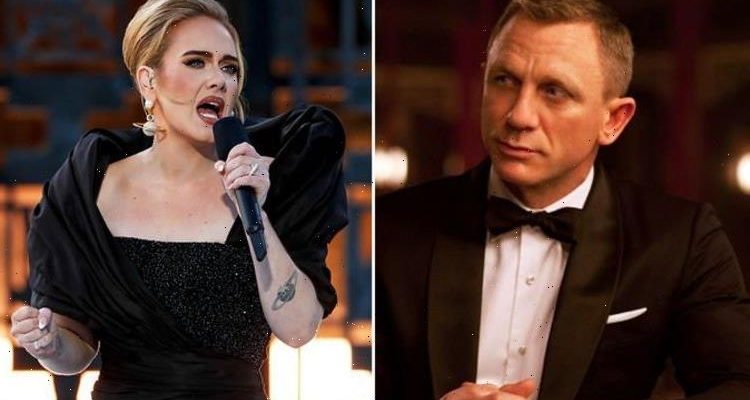 Only six actors have officially played James Bond and as the film franchise celebrates its 60th anniversary next year, just who could be the latest 007 star? The likes of Tom Hardy and Richard Madden continue to dominate the bookies’ odds, but what do those who have been involved with the series think? Well, now Skyfall singer Adele has shared who she backs to be the next Bond.

The topic came up during Vogue’s 73 Questions With Adele YouTube interview last month, ahead of her new album 30.

Making cups of tea at home in LA, the 33-year-old was asked: “How was recording the Skyfall Bond theme different from recording your other stuff?”

The star replied: “Well I was heavily pregnant actually when I did the vocals for Skyfall. And it’s the song that I recorded while I was pregnant with him.

“So my voice was a lot lower and he also hated when I was singing the high notes. He’d sort of kick around inside of me.”

The interviewer then boldly asked: “Who would you bet is going to be the next James Bond?”

Adele replied: “I mean it’s a tough one. There’s been lots of different choices and stuff.

“But I would like Jonathan Majors to be the next Bond. But I don’t know if that’s allowed because he’s American.”

Majors’ big break that’s set to make him a Hollywood A-lister came when cast as Marvel comics villain Kang the Conqueror in the MCU.

The despot character is a descendant of Fantastic Four’s Reed Richards from the 31st century, who goes on to become a time travelling adversary of the Avengers.

He debuted as a variant of Kang’s called He Who Remains in the Loki Disney+ show and is also the main antagonist in the 2023 blockbuster Ant-Man and the Wasp: Quantumania.

The actor recently starred as Nat Love opposite Idris Elba in Netflix Western, The Harder They Fall.

Talking of his co-star, after saying Majors may not be allowed to play Bond because he’s American, Adele added: “But I think…Idris Elba.”

The 49-year-old Brit has long been a favourite in the running to be the next 007 and as it stands has best odds of 5-1.

Although, as with Majors being American, Elba may be too old to portray Bond given that Craig has bowed out at 53.

Whatever the case, with the 60th anniversary looming next year, here’s hoping producers announce the next 007 sooner rather than later.