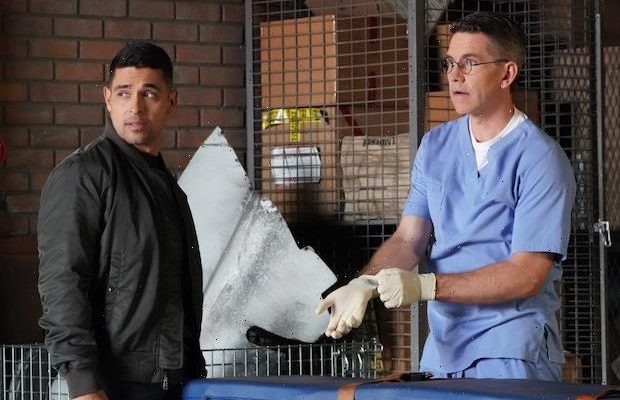 Leroy Jethro Gibbs may be some 3,300 miles away, but his presence was very much felt in Monday night’s NCIS midseason premiere.

For much of the episode “Pledge of Allegiance,” both McGee (played by Sean Murray) and Palmer (Brian Dietzen) were vexed by the mysterious deposit of $10,000 into each of their bank accounts. (Torres, meanwhile, focused on getting Jimmy to spread the wealth, even if by paying for 30 rounds of drinks.)

But at episode’s end, Director Vance (Rocky Carroll) asked McGee to stay behind in his office after wrapping up the Case of the Week, and then summoned for Palmer. The two gents assumed they were in trouble for holding onto their mysteriously gotten gains, when in fact Vance wanted to explain the very purposeful windfalls.

“I wanted to welcome you as the newest members of the Leroy Jethro Gibbs College Scholarship Fund,” Vance shared to a stunned McGee and Palmer..

When the two dads remarked that Gibbs’ deposits were “too generous” and had to be given back, Vance made clear “you can’t — and I should know,” having become a beneficiary of the LJGCSF back when his own kids were the same age as Tim’s and Jimmy’s.

Vance went on to explain that the fund was originally set up by Gibbs for his daughter Kelly, but when she tragically died at a young age, he decided to not only keep the account open but keep adding to it over the years. By peeling off a few bills from it now and again, “He has helped a lot of agents’ families,” Vance said.

McGee remarked with due awe, “What a legacy,” while Palmer wished he could thank the team’s former boss “in person.”

“Well, hopefully one day you will,” Vance smiled.

What did you think of Gibbs’ unexpected “appearance” this week?