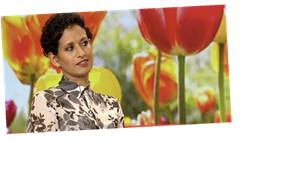 BBC Breakfast star Naga Munchetty left fans with open jaws as she confessed that she didn't know the word charabanc – pronounced as sharra-bang.

Fortunately co-star Charlie Stayt, 58, was on-hand to provide his co-anchor with further insight, explaining that the term was used to describe a coach or bus.

A shocked Naga said: "You taught me a word. Charabanc.

"I never knew that. You learn something new every day."

The word sparked some confusion online as the word Sharabang in the Urban Dictionary means to 'break wind in a crowded room'.

It's clear that Naga hadn't minced her words and had meant the vessel term but that didn't prevent fans from taking to Twitter to pen their thoughts.

One online user said: "#bbcbreakfast Did Naga really say, with a snooty sneer, that she had never heard of a charabanc? I'm not really surprised."

Another fumed: "It is Naga Munchetty's ignorance and stupidity that gets her into trouble."

A third quipped: "Naggy's proud of herself for learning a word that everyone else already knew #BBCBreakfast."

While another asked: "Has @TVNaga01 made and an on air apology yet? #BBCBreakfast?"

Only yesterday, Naga was forced to apologise for liking "offensive" tweets that seemed to criticise a government minister for displaying the Union Jack in his office.

The TV presenter has since un-liked the tweets, also making it crystal clear that those posts do not represent BBC views – with the broadcaster remaining impartial on the matter.

On Thursday, she noticed an unmissable Union Jack flag behind Robert Jenrick, Secretary of State for Housing, Communities and Local Government.

As the interview unfolded, Naga's co-star Charlie Stayt quipped that the flag was "not up to standards" which set sent his co-star into a giggling fit.

Naga said: "There's always a flag. They had the picture of the Queen though, in the Westminster office, I am assuming."