It’s a beautiful day at Katherine Gorge – mid-20s, blue sky, a gentle breeze – where the makers of Top End Wedding are about to shoot the most overtly romantic scene in this home-grown rom-com. 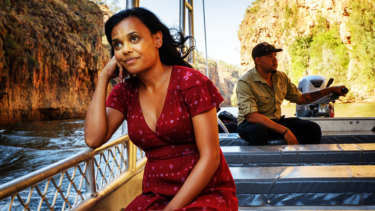 The conditions are perfect for Lauren (Miranda Tapsell) to follow a trail of rose petals laid by her English fiance Ned (Gwilym Lee) to the breakfast he has laid out for her on a rocky outcrop overlooking the river.

Unfortunately, though, the scene has been hijacked by a circumstance not even the most prepared set can foresee: a tourist has taken seriously ill, and an ambulance has turned up right where it was meant to be shot.

It’s time for Plan B. The proposal will have to wait.

For some crews, this might count as a minor disaster; for director Wayne Blair and his team, it’s barely a blip. Within the hour, they’re shooting a completely different scene involving a camper van, a confrontation between Lauren and Ned and a pair of dope-smoking hippies, and a good dose of very broad slapstick comedy. 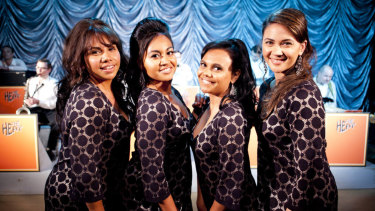 Tapsell (third from left) shot to fame in The Sapphires, in which she co-starred with (from left) Deborah Mailman, Jessica Mauboy and Shari Sebbens.Credit:Goalpost Pictures

It’s a remarkable change of pace but, Blair says later, “We just had to move everything out of respect. Life comes before art.”

At any rate, adds Tapsell, who co-wrote the film with comedian Josh Tyler, switching things up is entirely within the compass of Blair’s normal way of working.

“Wayne has a beautiful but chaotic mind,” she says. “We had no plan at all while we were filming in the Territory. Everyone was running off gut instinct really. We might have a really beautiful location and Wayne would see something and go, ‘Oooh, we need to have it here [instead]’, so it would stop. It was very guerilla filmmaking.”

She gets no argument from Blair, her director on The Sapphires, Redfern Now, Love Child and a handful of other projects before this. “That’s the way I work, the improvised nature of things,” he says. “You roll with the punches, especially with comedy. You need room to improvise.” 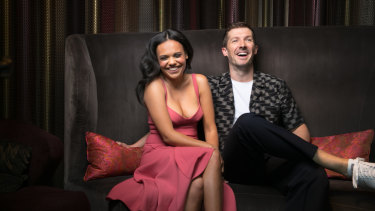 Tapsell with co-star Gwilym Lee, whose most recent role was as Brian May in Bohemian Rhapsody.Credit:Simon Schluter

At any rate, Blair thinks the change-up on the ill-fated morning produced a better result. “We moved those scenes, and the places we moved to were just a little bit stronger,” he says. “Someone was looking after us.”

Maybe it was the ancestors, he says.

Top End Wedding isn’t just a rare example of an Australian rom-com. It’s quite possibly the first foray into the genre from an Indigenous perspective, with Tapsell and Blair and the producers of The Sapphires re-teaming in the hope they can recapture some of the magic that took their 2012 film to global success.

They’re counting heavily on the considerable charms of Tapsell, a talented and extremely likeable actress who decided the best way to respond to the call she made at the 2015 Logies (where she won best newcomer for Love Child) for better parts for non-white performers was to start writing them herself. 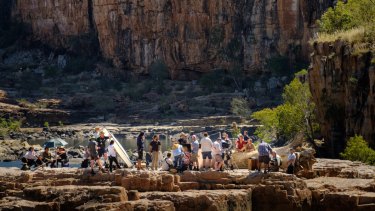 Top End Wedding shooting on location in the Northern Territory.

“I felt it was time for me to be challenged with a lead role,” she says. “While I’ve been given lots of wonderful opportunities, I felt I needed some more meat to work with.”

In writing what would become Top End Wedding, she drew inspiration from the films she loved – Sleepless in Seattle, When Harry Met Sally, My Big Fat Greek Wedding. “She knows the genre inside out,” says co-star Lee. “She’s the person you’d call on Who Wants to be a Millionaire? if you needed to phone a friend.”

But knowing the genre and writing it aren’t the same thing, as she painfully discovered.

“You’re always going to hate yourself the first time you write something because it sounds really awesome in your head and then you put it on the page and you just go, ‘Oh, that’s rubbish’,” she reflects. “It takes time, you know.” 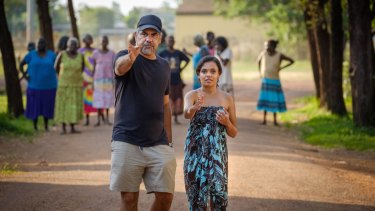 Director Wayne Blair and Tapsell on the set of Top End Wedding.Credit:Universal

Five years, in fact. That’s how long it took to tell her story of an Aboriginal lawyer in Adelaide who heads back to Darwin to spring a surprise wedding to an Englishman upon her Indigenous mother and white father – only to find her mother has disappeared. She’s got 10 days to follow her faint trail across the Northern Territory, and finally to her mother’s birthplace, the Tiwi Islands, and salvage her wedding plans before they crumble entirely.

For its first two acts, Top End Wedding is indeed a genre comedy – and at times a rather heavy-handed one – full of contrivances, unlikely twists and turns, and spectacular scenery. But in its final third it becomes something else entirely, a beautiful, genuinely moving story about reconnection to family and culture, played out in a community on Tiwi about which most viewers will likely know very little. It’s a final act that quite simply elevates the film to something a little bit special.

“I carried a sick feeling in my stomach for five years, going, ‘Is this right, is this how I want to tell it, is this going to reflect my community honestly and authentically?’” says Tapsell, who grew up in Darwin and has family on the Tiwi Islands.

The journey in the film is primarily Lauren’s, but Ned is a more than willing companion. Like her, he’s a lawyer. Unlike her, he’d rather not be.

He’s secretly tossed career aside to follow his heart, even if he has no idea where it’s going to take him – which ends up being Darwin, Katherine Gorge, Kakadu, and finally the island.

Lee was at home in a London winter when he received the script; flicking through it and noting all the exotic – and sunny – outdoor locations, his mind was quickly made up. “I was like, ‘Oh yeah, get me out there now’,” he says.

At the time, Lee was an unknown actor in the middle of shooting his first role – as Queen guitarist Brian May in what would become one of last year’s biggest hits. On holiday in London, and exhausted from writing, Tapsell needed to be cajoled by the casting agent into meeting him.

“It just happened to be his day off and he completely downplayed that it was Bohemian Rhapsody,” says a slightly embarrassed Tapsell. When she put two and two together later, she says, her response was: “What – I’m an idiot. How did I not know this?”

In fairness, says Lee, no one knew how big the film was going to be. “All you can do, all we did, is invest in the story and make it the best it can be,” he says. And for the record, being in an Oscar-winning global smash doesn’t mean he now has a Maserati in the driveway. “I’m currently unemployed,” he says, “so if anyone wants to give me a job that would be great.”

For director Blair, whether or not Top End Wedding strikes a chord at the box office, it is already a success by virtue of the fact it has broadened the understanding of Indigenous culture on screen.

Crucially, he says, it goes somewhere we’ve never been before in that final act, in “those moments where we introduce a cultural world – we go to Tiwi Island, people speak in language, which still exists on that island”.

“The first two acts are there, in a sense, to build us up to that moment, and you’re sort of taken to a place you didn’t expect to go, and people are really responding to that. They enjoy the first two acts but they’re taken to a special place in that third act,” Blair says.

In a sense, the rom-com format is a bit of a Trojan horse for a representation of Indigenous culture that is likely to surprise and delight anyone who comes to it with an open heart. There’s a message here, but it’s sweet and easy to swallow, which makes it a far cry from some of the excellent but undeniably challenging tales that have emerged from Indigenous filmmakers over the past decade or so.

“In the zeitgeist of Indigenous film, for every Samson and Delilah there’s a Sapphires, for every Beneath Clouds there’s a Top End Wedding,” says Blair. “We need all those moments from Redfern Now and Mystery Road in our conversation, but we also need the really beautiful moments.

“All our stories should be part of the Australian conversation.”

Top End Wedding is in cinemas from May 2.

The day Miranda Tapsell got her angry on

Few people in Australian entertainment are as universally liked as Miranda Tapsell. Mention her name and the typical response is, “Oh, she’s just lovely”. If the position of Australia’s Sweetheart is vacant, seriously, she should apply.

That’s what made her appearance on the final episode of the ABC-TV comedy series Get Krack!n in March so remarkable. This was Tapsell as we’ve never seen her before – angry, outspoken, activist. No longer sweet, but sweary. Not just fierce but positively fuming. 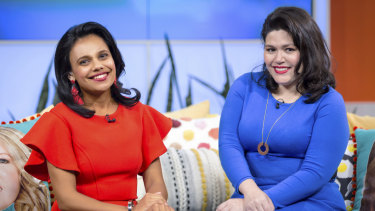 Miranda Tapsell and Nakkiah Lui in the final episode of Get Krack!n.Credit:ABC

The regular hosts of the breakfast show within the show, the Kates (McLennan and McCartney – the McBeatles), had both rushed off to hospital “in labour”, leaving the show in charge of their guests, a Tapsell and Nakkiah Lui, the Indigenous writer and activist who has in real life drawn flak for her outspoken comments on Q&A and elsewhere.

At first, Tapsell was overjoyed to be in the hot seat. But as the show went on, she began to bristle at the price she had to pay for a shot at the mainstream.

“Let me tell you two little rules I learnt if you want to stay employed as a black woman on TV: smile and never complain,” she told Lui.

She then listed a whole lot more rules, including “have a face like a Disney squirrel so as not to appear threatening” and “don’t mention genocide”.

Follow them all, she said, and “maybe white people will like you, or at least forget that you’re black for a while”.

Finally, she dropped the facade entirely.

“I’ve been living with racism since the moment I shot out of my mum,” she stormed. “Thirty years of trying to be who they want me to be … 30 years of smiling and making big eyes and not showing my anger. I’m done not being angry.”

It was remarkable television, controversial, confrontational, and so utterly unexpected because it was Tapsell leading the charge (though it was primarily Lui who penned the words).

But how much of that, I ask her, was the real Miranda Tapsell speaking?

“We were characters,” she says. “We were heightened characters, but the fact I was allowed to go all out was awesome – it was very freeing and liberating.”

She knows some people will have found it hard to take, but the fact she got to say it at all counts as a victory.

“I’m so incredibly proud that as an Aboriginal actress in this country, I get to have more in-depth conversations with the kind of country I want Australia to be. I know that a lot of Indigenous actresses before me have not been given that freedom, and to have that and not be ashamed to do it is really important to me.

“That’s why I became an actor,” she says. “Why be dishonest about the lives we’re living?”