The conversation between pop culture legends Bruce Springsteen and Martin Scorsese began as one might expect, with the two gentlemen spending roughly 15 minutes admiring each other’s work and reminiscing about times their paths had crossed. It wasn’t necessarily riveting, but it was certainly something to be sitting in the presence of two guys whose work profoundly influenced both film and music over the last 40-odd years.

But as impressive as it was to see the pair on stage at Netflix’s FYSee space at Raleigh Studios in Hollywood, ostensibly to pitch Emmy voters on “Springsteen on Broadway” as a contender in outstanding variety special (pre-recorded), it was when the men started pulling apart the larger elements of performance that the panel blossomed into something substantial.

Recorded over two nights, “Springsteen on Broadway” is a filmed adaptation of the musician’s highly-successful one-man Broadway show, which ran for 236 performances, concluding December 15, 2018. The next day, the filmed version dropped on Netflix for all fans who couldn’t hack the high ticket prices of the live show to enjoy.

But despite performing the show – featuring stories from Springsteen’s past used to contextualize songs people already knew and loved – hundreds of times and thousands of live performances throughout his career, the musician was rattled by trying to bare his soul directly into a camera.

“The first night, I was really uncomfortable, which was a little unusual,” Springsteen confided to Scorsese, midway through their chat. “I came out and I’m looking into the camera and I’m trying to do what I normally do and I realize that I’m doing the weirdest thing you can do on stage: Which is think about what you’re doing.”

“Don’t ever do that,” he instructed the audience with a laugh. “Don’t get on stage and find yourself thinking about what you’re doing, because you’re fucking it up.”

He didn’t stop there, thankfully, instead choosing to unpack what it is exactly that awkwardness robs a performance of, sage advice from a man who knows what it is to entertain tens of thousands of people, night after night. 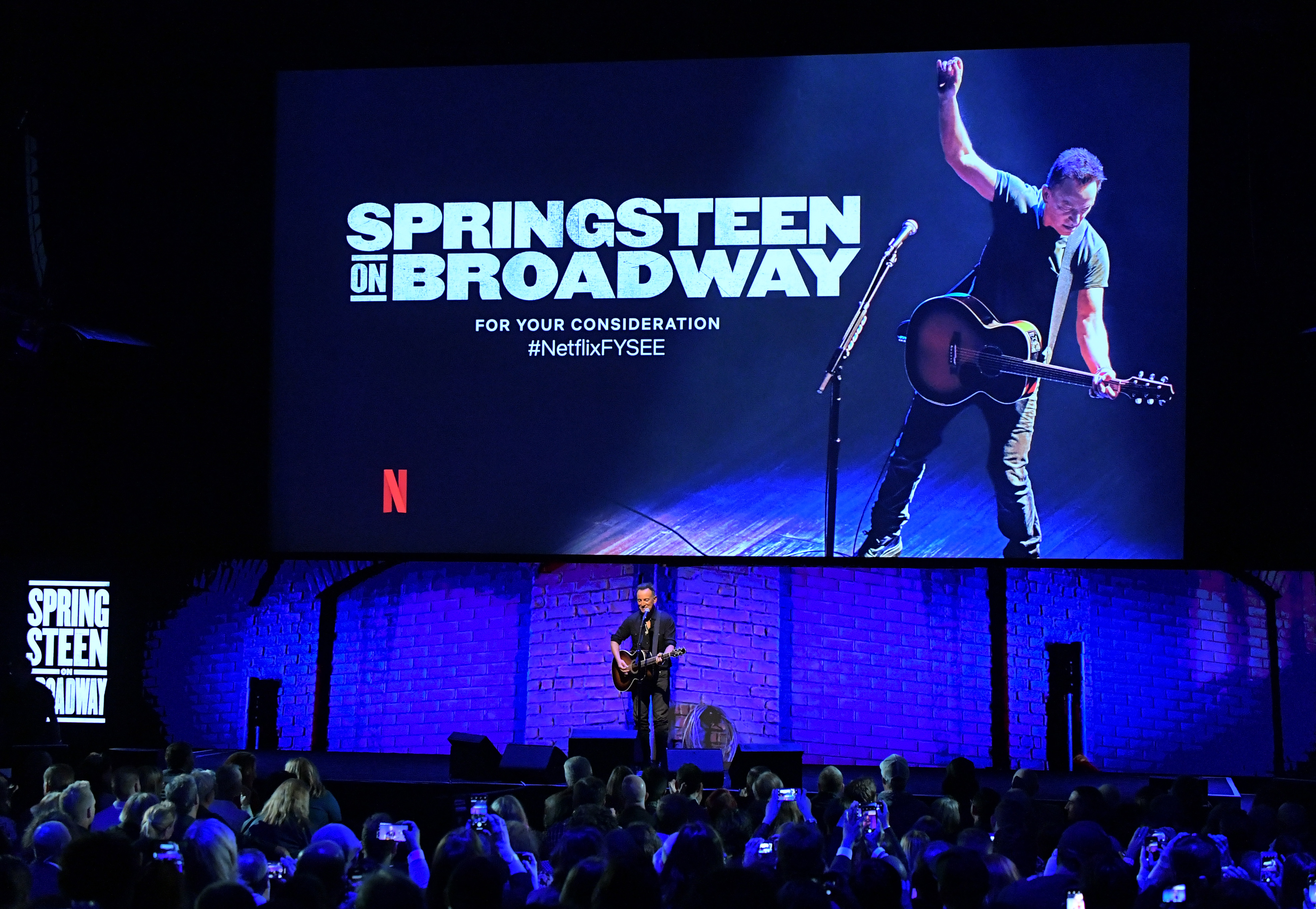 Springsteen’s insight instantly made the entire event worthwhile, making it not just a blatant display of the level of talent Netflix can pull on command (shades of Apple’s first foray into television earlier this year) but an opportunity for two men forever aligned with traditional masculinity to discuss the importance of vulnerability.

“If you’re having that inner dialogue while you’re [performing], you’re sunk. You’ve got to be in your story, recreating those experiences like they’ve never happened before and giving the audience access to them,” he said. “And then, something watchable happens and you’re a gateway to a larger experience that’s bigger than yourself and your audience and something wonderful happens.”

Though just a single moment of the evening, Springsteen’s story was perhaps most representative of “Springsteen on Broadway” itself. In the film, the singer discussed his love for his mother, his strained relationship with his father, the mental illness that haunts his family, among other personal issues, destroying that remove between artist and audience, allowing for an intimate experience unlike most concert films.

Springsteen also surprised the audience by performing two of his songs, “Dancing in the Dark” and “Land of Hope and Dreams” live at the conclusion of the conversation and, true to his word, as he performed he allowed a vulnerability to shine through.

Before beginning “Dancing in the Dark,” he said that it was his mother’s 93rd birthday the day before and he spent the afternoon with her. “She’s nine years into Alzheimer’s,” he shared. “She can’t speak. But I put on Glenn Miller when I come in and she still loves to dance. She dances to survive.”

“So lace up your dancing shoes, get on the floor and get to work,” he concluded.